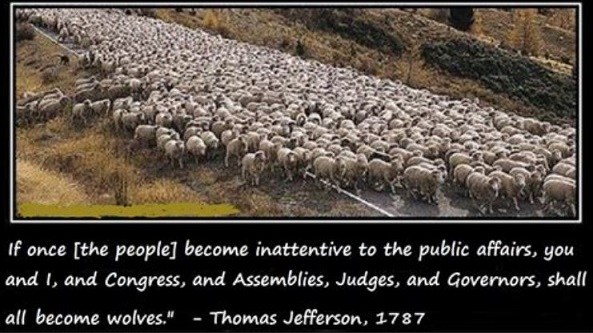 Do you wonder why so many Americans have piled onto the Democrats’ persecution of Judge Brett Kavanaugh, seemingly oblivious to America’s fundamental principles of evidence-based accusation and innocent until proven guilty?

The answer is in the stunning results of a recent national survey which found that only one-third of adult Americans could pass a multiple-choice U.S. citizenship test, with a passing score of 60. The test consisted of items taken from the actual U.S. Citizenship Test. Younger Americans (age 45 and younger) are even more ignorant, with just 19% (2 out of 10) who passed the test.

The survey of a random (and thetrefore representative) sample of 1,000 American citizens was conduced by research firm Lincoln Park Strategies for the Woodrow Wilson National Fellowship Foundation, which was founded in 1945 to identify, develop, and support America’s best minds to be the next generation of leaders. The survey has a margin of error of ±3%.

In a press release on October 3, 2018, the Foundation made public the results:

With voters heading to the polls next month, an informed and engaged citizenry is essential. Unfortunately this study found the average American to be woefully uninformed regarding America’s history and incapable of passing the U.S. Citizenship Test. It would be an error to view these findings as merely an embarrassment. Knowledge of the history of our country is fundamental to maintaining a democratic society, which is imperiled today. Americans need to understand the past in order to make sense of a chaotic present and an inchoate future. History is both an anchor in a time when change assails us and a laboratory for studying the changes that are occurring. It offers the promise of providing a common bond among Americans in an era in which our divisions are profound and our differences threaten to overshadow our commonalities.

Alas, the Woodrow Wilson Foundation does not break down the survey results by political party identification.

Washington Times has a 24-question multiple-choice US citizenship test. The newspaper explains:

An important part of the application process for becoming a US citizen is passing a civics test, covering important U.S. history and government topics. There are 100 civics questions on the naturalization test. During the interview process, applicants are asked up to 10 questions and must be able to answer at least 6 questions correctly. Here is a sampling of what may be asked.

The 24 questions are really, really easy for regular readers of FOTM. As an example, the first question is “Who is in charge of the executive branch?”.