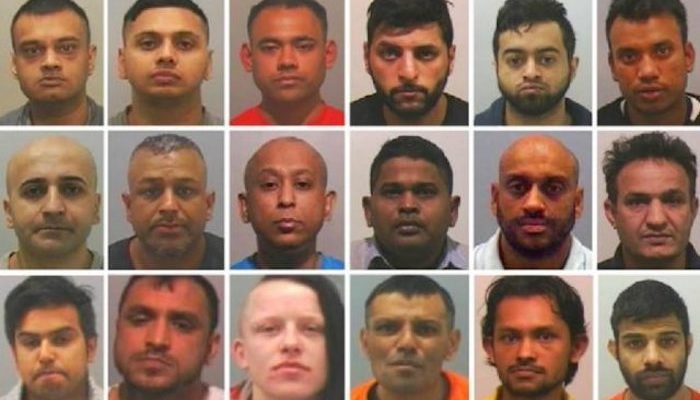 By the summer of last year, Glasgow had the highest number of housed refugees in the UK with almost 10% of the “asylum seekers” setting up shop in the Scottish city. The overflow of refugees, many of them from Pakistan, Iraq, and Afghanistan, has brought in government money, but also violence and crime. Refugees whose requests for asylum are rejected refuse to leave and remain on in Glasgow.

Glasgow had been eager to cash in on asylum seekers, and in the last two decades was fundamentally transformed by the tide of migrants filling up its neighborhoods. As Pakistanis became the largest minority group in Scotland, 42% of the country’s Muslim population took up residence in Glasgow.

By the 2011 census, a fifth of Glasgow’s population was non-Scottish. In Pollokshields, a quarter of the population is Pakistani. Pollokshields is also where Kriss Donald, a 15-year-old Scottish teenage boy, was kidnapped in the spring of 2004, stabbed all over his body and then set on fire by a Pakistani gang.

“His violent death was a result of political correctness that has gripped the police in Scotland,” Mike Liddell, a senior police officer warned. “Crime within Glasgow’s Asian community has been allowed to grow unfettered for years. Why? Because the police have been afraid to fight it in case they are accused of racism.”

Ayub Khan, a member of the Multi-faith Coalition group in Pollokshields, agreed, “people know that the police are too scared to come into the area and be accused of racism.”

Last year, Mohammed Maqsood, had his appeal thrown out. Maqsood had been accused of the Kriss Donald murder, but had remained free until he raped an 18-year-old girl, who got into what she thought was a taxi in Glasgow, before she was brutalized and left half-naked in the street.

Mohammed then generously dumped her clothes in a charity bin to hide the evidence.

The assault was one of many that involved taxis and Glasgow’s growing Muslim community. The taboo topic has been the subject of multiple police investigations after reports began to circulate in the press.

A 2011 report in the Evening Times documented the story of a teenage girl who had been abused and prostituted by a man named Nasir.

“One minute I was a normal teenage girl, the next, I was being forced to have sex with these old men,” she revealed. “I had never even kissed a boy before – they completely took my innocence from me.”

Nasir raped her in front of his fellow gang members while they recorded the assault on their cell phones. After she was prostituted, harassment by the gang forced her family to flee from Glasgow’s immigrants.

In 2011, Operation Cotswold was set up to focus on the Muslim refugees who were abusing young girls in care homes, facilities for children from broken families.

The police identified 26 potential victims, but no one was prosecuted.

In 2013, Operation Dash tracked the role of Muslim taxi services and fast food places in the grooming and sexual abuse of young girls. It focused on the Strathclyde area, a center of the city’s Pakistani population going back decades. That was where the police had launched and then shuttered Operation Gather a decade earlier because its focus on Muslim gangs had been deemed politically incorrect.

Operation Dash found that girls as young as 10 years old were being abused. 84 victims were identified and 27 suspects were reported. Only three were reportedly actually sent to prison.

And only one, Javaid Akhond, a refugee from Afghanistan working in a fast food place, was named.

The Muslim refugee, like many foreign criminals, was hoping to rely on EU rules that prevent the deportation of even the worst criminals if they have left behind a child in a European country.

In a familiar pattern, Cotswold and Dash turned up over 100 victims, but very few actual results.

Operation Cerrar, the latest successor to these operations, identified 56 members of a Glasgow grooming gang. The perpetrators were Pakistani, Iraqi, Egyptian, Turkish, and Moroccan refugees.

44 girls were abused by these refugees. Many were abused many times. Including one who was assaulted by 28 of the perpetrators and another by 23 of them.

14 of the abusers have been deported. Only 1 is in prison.

The police kept the investigation and its results secret. With results like these, it’s easy to see why.

After three investigations that have taken place over a decade with 154 identified victims, and at least 71 perpetrators, there have been seemingly only four actual prison sentences.

And the only one that has been made public amounted to a slap on the wrist.

If British authorities prosecuted Muslim grooming gangs as vigorously as they do ‘Islamophobia’, then the countless thousands of girls abused across major cities would sleep soundly in their beds at night.

Like many of these cities, Glasgow opened its doors to Muslim migrants for economic and political reasons. Labour and the Scottish National Party then fought eagerly over Muslim votes.

The 154 abused girls paid the price for the UK’s migration policies, for Glasgow’s eagerness for the economic benefits of opening up to migrants and refugees, and of the Scottish National Party’s desire to achieve independence for Scotland, even if it had to do it by submitting to the EU and Islam, and replacing the native population with a more reliable voting base for its social welfare and green energy.

In 2007, Bashir Ahmad became the first Muslim member of the Scottish Parliament for the SNP from Glasgow. He was followed by Humza Yousaf, his former assistant, who became the first Muslim cabinet minister holding down the justice portfolio and took his oath of allegiance in the Scottish Parliament in Urdu. Jahangir Hanif, a Glasgow SNP councilor, was caught teaching his children to fire an AK-47 at a training camp in Pakistan, near Kashmir.

The SNP’s Islamic squad came through the Muslim Brotherhood’s local outlet, the Scottish Islamic Foundation. And the SNP generously funneled money to the SIF in recognition of their support.

The SIF’s boss, Osama Saeed, who has cheered a return of the Caliphate, was an adviser to former First Minister Alex Salmond, the SNP’s dirty leader, who ran Scotland into the ground.

Salmond is currently on trial for assaulting 10 women.

The Scotland National Party’s answer to Harvey Weinstein even stands accused of trying to rape a woman in Bute House, the official residence of the First Minister, and in the Scottish Parliament.

Is it really any wonder that Scottish authorities have managed to do an even worse job of tackling Muslim sex grooming gangs than their counterparts in Manchester, Rotherham, and Oxford?

Daniel Greenfield is a Shillman Journalism Fellow at the David Horowitz Freedom Center. This article previously appeared at the Center’s Front Page Magazine.
Click here to subscribe to my articles. And click here to support my work with a donation.
Thank you for reading.
(Visited 1 times, 1 visits today)
Share
Tweet
Share
Pin