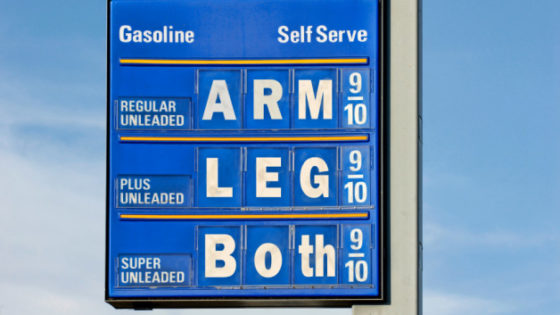 Editor’s Note: Classic Liberal Logic is on full display in California. Check out the latest from the “land of fruits and nuts”…

California is home to some of the most power-hungry politicians on Earth. These people actually hiked the gasoline tax, and are now demanding an investigation into why gas prices are higher in California than elsewhere in the United States. It would be sad if it wasn’t so insane.

California Governor Gavin Newson is demanding an investigation into why the state’s gas prices are so high. But as Reason points out, it’s not all that difficult to see what that California politicians are the culprit. In fact, the reason the gas prices are high is that Newsom (and other politicians) raised taxes on gasoline.

As lieutenant governor, Gavin Newsom supported a 2017 bill increasing the state’s gas taxes. When running for governor in 2018, he opposed a ballot initiative that would have repealed that same increase, reported Reason. But like all politicians, Newsom is unwilling to admit that he and his comrades in the California government have caused the problem. So begins the finger-pointing. The governor sent a letter to the California Energy Commission (CEC) on Tuesday demanding that the state agency “investigate” California’s roughly $4.03 per gallon gas prices, which are currently the highest in the country. Those prices are also well above the national average of $2.86 per gallon.

“Independent analysis suggests that an unaccounted-for price differential exists in California’s gas prices and that this price differential may stem in part from inappropriate industry practices,” wrote Newsom in his letter to the CEC. “These are all important reasons for the Commission to help shed light on what’s going on in our gasoline market.”

California currently imposes the second-highest gas taxes in the country. A state excise tax currently adds $.417 per gallon (almost 42 cents per gallon), and that rate that will increase to $.473 (47 cents per gallon) come July. But that’s not all. On top of that tax, the state imposes a 2.25 percent gasoline sales tax. There’s more. California has also added a low-carbon fuel standard and a cap-and-trade scheme for carbon emissions which together already increase the state’s gas prices by $.24 per gallon above the national average, according to a 2017 state government report.

The worst part is that Newsome isn’t the only problem causer asking for blame to shifted to “inappropriate industry practices” as opposed to their gas tax hikes. In January, 19 state legislators (17 of whom had voted in favor of that 2017 gas tax increase, while the other two had only entered office in 2018) sent a letter to State Attorney General Xavier Becerra, in which they demanded that the state’s Department of Justice (DOJ) investigate the “unexplained gasoline surcharge” that was estimated to cost Californian families $1,700 a year.

Even someone who understands just the basics of economics knows that high levels of taxation and regulation and a lack of competition in the state’s fuel sector are not mutually exclusive explanations to the high gas prices. Government fees and red tape often have the effect of squeezing out marginal producers and retailers (eliminating competition) giving remaining firms greater ability to raise prices. It’s called supply and demand. The demand remains but much of the supply is gone. Once the competition (supply) is gone by way of taxation and regulation, the companies that remain can jack the prices up as high as they want.

California’s government is not doing its residents any favors when it comes to their policies.