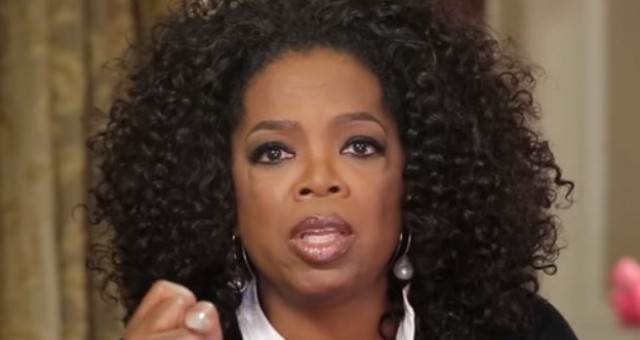 Black billionaire media mogul Oprah Winfrey pulled out the good old race card (again) and complained about how white people have an advantage over black people purely based on the color of their skin.

That’s rich coming from a lady who made her fortune off of white people watching her crappy tv show.

The media mogul had an in-depth discussion about climbing the ladder in corporate America on her new show “The Oprah Conversation.” Winfrey’s first episode featured an interview with former NFL player Emmanuel Acho. The episode’s title, “Uncomfortable Conversations with a Black Man: Part 1” is based on the former linebacker’s YouTube series and upcoming book of the same name.

Acho begins the episode with a statement to viewers, explaining that he believes in order for White people to understand systemic racism, it starts with having an understanding of the “full level of pain” Black citizens experience.

I have no idea what he is trying to say but whatever.

Acho went on to say that, in America specifically, White people “run America.”

From Leisa Audette at 100 Percent FED Up:

She’s smart. Oprah knows better than this but is stuck in her own racist mantra, where she honestly believes white people have an advantage. Remember when she said, old white people need to die out already. She made another assumption that all old white people are racists. Who’s the racist now?

In an episode entitled “Uncomfortable Conversations with a Black Man: Part 1,” Oprah interviewed white people who feel guilty about their whiteness. She praised her white guests for accusing themselves of being “racist.”

That’s just sickening in my opinion.

“There are white people who are not as powerful as the system of white people…the caste system that’s been put in place…but they still, no matter where they are on the rung, or the ladder of success, they still have their whiteness. You still have your whiteness. That’s what the term “white privilege” is. It means that whiteness still gives you an advantage, no matter what,” she said.

Americans have moved forward, but it’s the racist people like Oprah who keep pulling us back into the past.

Ironically, Oprah should check her billionaire privilege and understand that just because you have the platform to speak, you may want to practice being a humble listener.