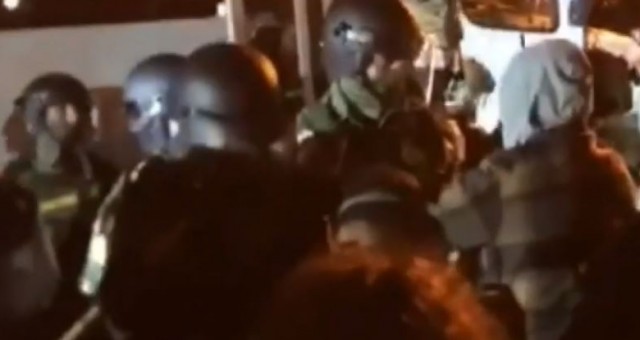 Federal agents in Bend, Oregon clashed with hundreds of protesters late Wednesday night after an hours-long standoff sparked by the arrest of two men by U.S. Immigration and Customs Enforcement officers, who said they were a “threat to the public,” Fox News reports.

Chief Krantz Statement: Yesterday and today the Bend Police were made aware that ICE agents were in Bend for an investigation, however we were not made aware of their detailed plans.

Yesterday and today the Bend Police were made aware that ICE agents were in Bend for an investigation, however we were not made aware of their detailed plans.

The protesters did not say who informed them about ICE being town and taking the two men out of town by unmarked buses.

The local Police Department released a statement that sums up, in my opinion, where the information came from.

“It appears the Federal Agents have left the area, The attendees of the first amendment event appear to have [dispersed] peacefully.

“The Bend Police are not involved with ICE operations, We do not use funds or personnel or equipment to enforce federal immigration laws or to detain people based on immigration status… We are on scene to allow free speech and a peaceful area to assemble and to provide life safety support.” ~ Bend Police Department

Bend police chief in his first week in the job arrives to warn protestors federal agents are coming to break this up. pic.twitter.com/X2uu6TRaWh

At some point federal ICE agents removed the two men from the buses and walked off from the area. Shortly after the protesters started to dissipate as well.