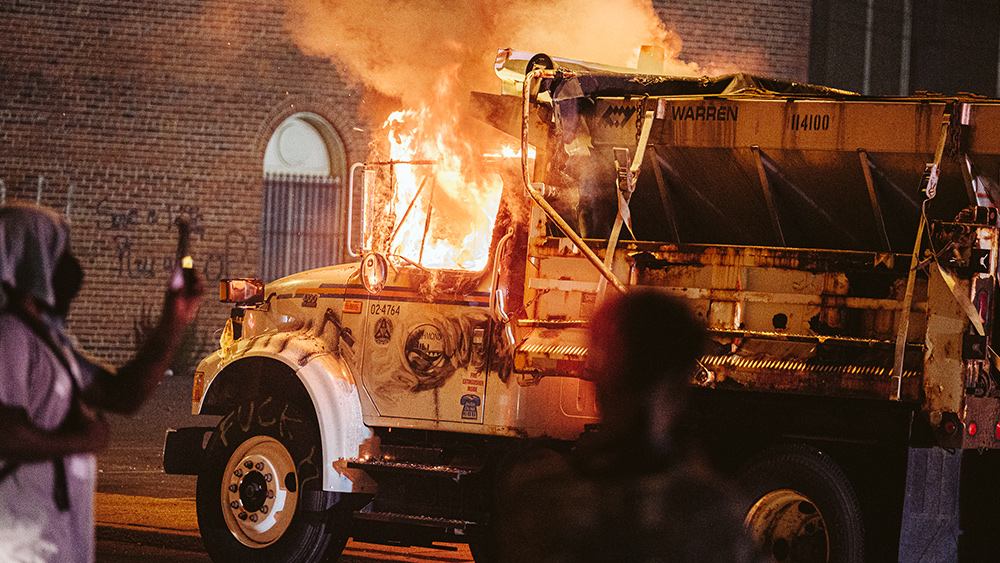 Natural News) BREAKING: Portland, Oregon now stands on the verge of collapse into total lawlessness and anarchy, all by design, as Oregon State Police are pulling out of the city following the decision of the local district attorney to drop nearly all charges against rioters who violently assault law enforcement officials.

Once again, a radical left-wing D.A. is deliberately plunging their own city into chaos, abandoning their duty to uphold the rule of law for the protection of the innocent residents of that city.

In essence, Portland is now being plunged into the kind of lawless, left-wing violence that characterized the CHAZ / CHOP zone in Seattle, which was openly allowed to be taken over by criminal terrorists with the blessing of the Mayor of Seattle and the Governor of Washington (both of whom must face arrest and prosecution for treason).

Portland, Oregon is about to become a Third World war zone run by violent terrorists and gangs. This is what Democrats want, because they hate America.

“The Oregon State Police is continually reassessing our resources and the needs of our partner agencies and, at this time, we are inclined to move those resources back to counties where prosecution of criminal conduct is still a priority,” Fox said in an emailed statement late Thursday.

Law enforcement has had enough; they are escaping Portland while they still can… COLLAPSE into anarchy now imminent

Paraphrased, Capt. Timothy Fox just told Portland officials that if they won’t even lift a finger to uphold the rule of law, the Oregon State Police aren’t going to keep risking the health and safety of their own officers to try to stop rioters and terrorists that appear to be fully supported by local Portland officials.

We are now witnessing the willful collapse of Portland into lawlessness and anarchy, all by design, with the complicity of Mayor Wheeler and Governor Brown, both of whom are criminal traitors engaged in acts of open insurrection against the United States of America.

If they will not uphold the law and the constitutional protections of “equal justice” under the law, they are guilty of dereliction of duty and should be arrested and prosecuted for their treasonous crimes against the people of Portland.

On the other hand, Portland is largely full of libtard leftists who voted for these so-called “leaders,” so they’re essentially getting exactly what they voted for: CHAOS, lawlessness, murder, violence, economic collapse and treason. When you vote for Democrats who hate America, you shouldn’t be surprised when they use the power you gave them to destroy everything they can. That’s their mission.

Portland property values will now collapse, and so will city property tax revenues and sales taxes

There’s no doubt whatsoever that property values will now collapse in Portland as business owners and informed residents take every measure possible to flee the city before left-wing terrorists and rioters burn it to the ground… probably while Ted Wheeler watches and applauds his new, twisted, “progressivism.”

The term “Democrat” has now become synonymous with terrorism and stupidity, and we are watching Democrats all across America burn down their own cities, plunging them into anarchy by cutting police funding and refusing to prosecute street criminals.

These are all the same treasonous Democrats, remember, who also say no citizen should have a right to own a gun for self-protection. So while the police flee the insanity, and the citizens are banned from buying guns, the local Democrat politicians release violent criminals from the prisons and actually side with terrorists, rioters and arsonists as they burn their own cities to the ground. Then they claim all the problems are “Trump’s fault.”

At some point, watching all this, America must ask the obvious question: Is this what Democrats have in mind for the entire country if Joe Biden wins the election?

Will they disband all police, release all violent criminals from the prisons, then declare anyone a “racist” if they refuse to allow their small business to be burned to the ground by Black Lives Matter rioters?

Democrats have now crossed the line into the criminally insane, and no one is more criminal or insane than Kamala Harris, who we now know took bribes from church officials to cover up heinous sex abuse crimes committed by church leaders. It turns out there’s nothing Kamala Harris won’t do for money and power, just like Newsom, Inslee, Brown, granny-murdering Cuomo and all the other left-wing Democrat governors who somehow think they’re hurting Trump by plunging their own local cities into anarchy and economic collapse.

These people are truly the enemies of America. Maybe it’s time Trump officially designated them as such so that we could start cleaning them out and restoring sanity to our nation’s great cities.

Learn how to survive the coming global reset. Download my free nine-hour audio book and printable transcript at GlobalReset.news