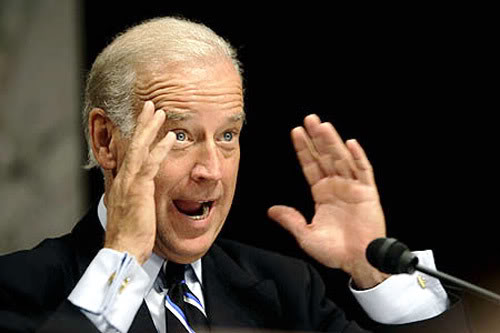 As former Vice President Joe Biden attempts to rewrite the past by claiming that Russian meddling in elections wouldn’t have happened on his and the usurper’s watch, he forgets that it did happen on their watch, something he apparently forgot was part of his party’s and the media’s narrative.

CNN’s Chris Cuomo, the 2020 presidential contender insisted that the Kremlin’s evil designs to influence geopolitical outcomes wouldn’t happen under his watch, and didn’t happen when he and President Obama were in the White House.

“Look at what’s happening with Putin,” said Biden. “While Putin is trying to undo our elections, he is undoing elections in Europe.”

“You think that would happen on my watch or Barack’s watch?” he asked rhetorically. “You can’t answer that, but I promise you it wouldn’t have, and it didn’t.”

No, really, he said it, and you can’t answer that because you would be pointing out either his lies or his delusions or both.

Interestingly enough, the Twitter-in-chief, President Trump, pointed out that the Obama administration was informed by the CIA of Russian meddling and did… nothing.

In May, Trump tweeted, “Why didn’t President Obama do something about Russia in September (before November Election) when told by the FBI? He did NOTHING, and had no intention of doing anything!”

Why didn’t President Obama do something about Russia in September (before November Election) when told by the FBI? He did NOTHING, and had no intention of doing anything!

On June 26, 2019, the president tweeted, “The reason that President Obama did NOTHING about Russia after being notified by the CIA of meddling is that he expected Clinton would win.”

That’s exactly right. All of this information was clearly known by the real colluders with Russia in the Obama administration, but they did nothing, not one thing to stop it.

I believe the turkey is now done, and that turkey is Joe Biden’s.