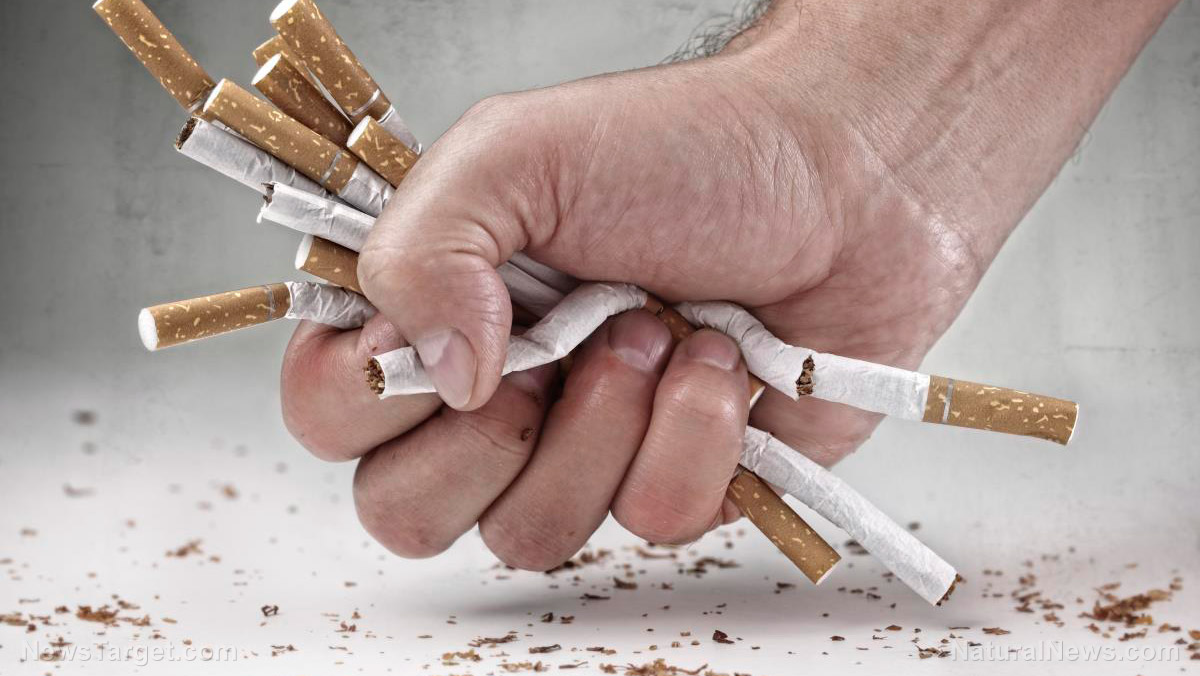 (Natural News) Currently, twenty percent of all humans on earth smoke cigarettes and have no idea how to quit. They’ll say they’ve quit before, but did they? They will tell you they are about to quit soon, but are they? How? Cold turkey? Only three to five percent of smokers who quit “cold turkey,” meaning abruptly with no help, last more than six months without getting dragged right back into the undertow by just one cigarette, usually due to stress, and then it’s right back to a pack a day within weeks.

The nicotine patch and nicotine gum are next to hopeless too, with only a four percent success rate. That dismal statistic is mostly because they still contain nicotine, the world’s third most addictive drug. Plus the patch and gum are big pharma scams manufactured and sold by Big Tobacco. Surprise, surprise. Heck, quitting smoking using the patch or gum, well, that’s like trying to quit being an alcoholic by shifting from whiskey to beer. Then there are the horrific medications that cause even worse depression than smoking, including feelings of suicide. We won’t go there.

The chemicals in cigarettes are what have you addicted, more so than the nicotine itself, just look at the science

Tobacco plants can have diseases and viruses, so they’re “treated” with chemicals to kill those, but the only problem is those chemicals kill humans also, just not as quickly as weeds. Every puff of every cigarette you are smoking a little bit of pesticide. So then, what happens to your brain and body as you ingest these insecticides and herbicides that are made with chemicals in laboratories by scientists wearing hazmat suits?

Symptoms of long-term pesticide poisoning include addiction to nicotine stimulant as the ‘aspirin’ for the ‘chemical-laden-cigarette-hangover.’ Feel nauseous? Smoke a stogie. Got a headache? Light up a square? You’ve been ingesting organochlorines, organophosphates, pyrethins, carbamates, and paradichlorobenzenes. Feeling dizzy, weak, disoriented and a bit apprehensive? You’re just a weed or a bug, addicted to relief from slow-pesticide-poisoning.

You’re probably familiar with moth balls. Well, paradichlorobenzene is the fumigant insecticide that kills moths that eat clothes. It’s found in rubber cement, lighter fluid and gasoline. It’s also used in those little hockey-puck-looking scented disks you see in urinals. It was first approved for use in the USA during World War II, when it was called 1,4-dicholorobenzene. Mothballs that contain it are solids that turn into toxic gas that kills the moths. Besides acetone, ammonia, arsenic, and butane, cigarettes contain paradichlorobenzene.

Let’s take a look at the main symptoms list for paradichlorobenzene poisoning, and you may feel like we’re describing every smoker on planet earth: breathing problems (rapid, slow, shallow or painful), coughing, changes in alertness, yellow skin (jaundice), and of course, recurring headaches. And here’s how they would treat you at the emergency room for pesticide poisoning: IV fluids, activated charcoal, breathing support (ventilator), and laxatives.

Battling the chemical hangover with more chemicals is a losing battle

There are currently over a billion smokers worldwide, half of whom would love to quit, but have no clue how. They don’t know how else to fight the big dopamine battle, other than with nicotine-loaded cancer sticks.

Instead of battling the chemical hangover, over and over again, why not eliminate the cravings for the drug that’s responsible for driving you to keep banging your head into the same wall? That’s why battling the chemical hangover with more chemicals is how you ‘lose the war.’ You see, without winning the dopamine battle, you lose the ‘quit smoking’ war. Boost your dopamine levels naturally, with superfoods and supplements, and you can write your own ticket out of the nicotine labyrinth.

A new liquid ‘shot’ called Krave Kicker promises to end cravings using a superfood and supplement blend that claims to zero out nicotine cravings for hours. (This publisher’s staff have received Krave Kicker samples at no cost to us, for editorial review purposes.) The liquid supplement promises to fill the gap as, “The world’s only natural nicotine alternative.”