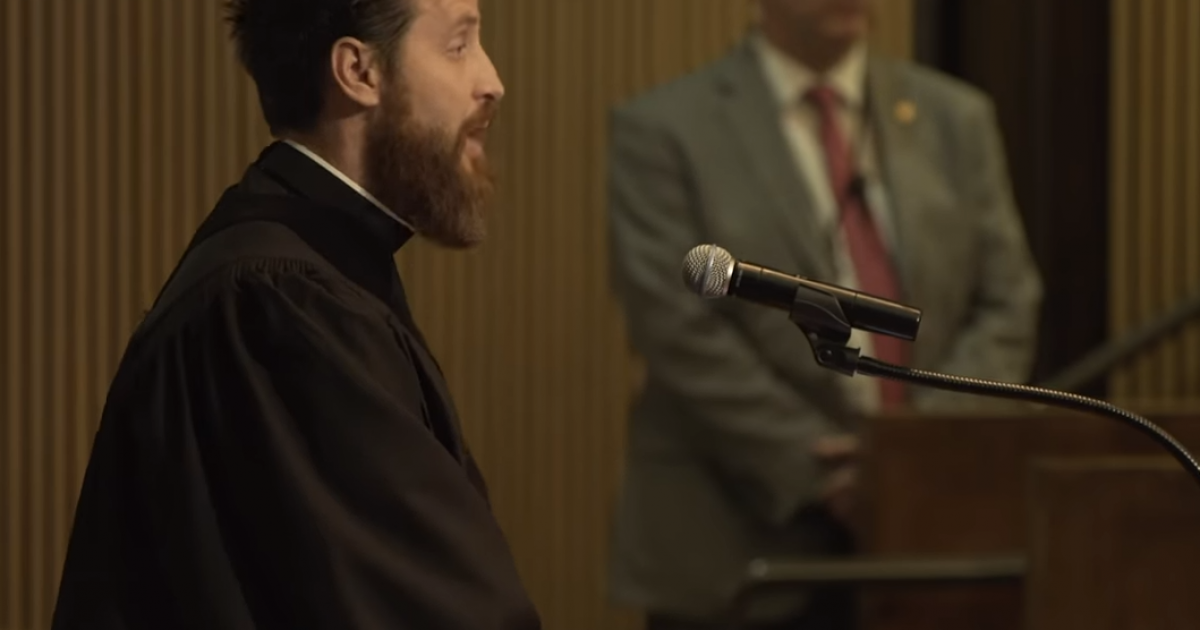 This is what is needed more and more in our country: Men of God who are unafraid to call their representatives to repentance and do their duty as ministers of God by upholding the law. Pastor Jeff Durbin of Apologia Church spoke before the Phoenix City Council and confronted them for failing to uphold Arizona law.

While many are putting forth a non-existent claim of a wall of separation between Church and state, claiming that the Church has no business speaking to the state about its duties before God, whom it ultimately serves, and the people, whom it also serves, Apologia Studios says, “This is an important duty and is part of the responsibility of the local church.”

Durbin called on the representatives to end the murder of the unborn now, reminding them that the murder of Arizona children is “happening on your watch.”

Take a look at the meeting and Pastor Durbin’s confrontation of the city’s representatives on December 12, 2018.

Durbin not only thanked the members for hearing him, but declared his “humble submission” to them in their “role as God’s ordained civil magistrates with the duty to preserve justice and to work to punish evil.”

Durbin said that his purpose in addressing the council was to be a “voice” to the “fatherless, preborn neighbors,” who are being “dismembered, poisoned and chemically burned” in the state of Arizona “in your city, under your watch and jurisdiction.”

“Not only is taking the life of an innocent human being in the womb against God’s fundamental command to not murder, it is against current and unchanged Arizona law,” Durbin thundered.

Arizona’s law banning abortion calls not for the criminalization of the women who obtained abortions, though it should as she is an accomplice, but for those who actually engage in the murder of the unborn child.

A person who provides, supplies or administers to a pregnant woman, or procures such woman to take any medicine, drugs or substance, or uses or employs any instrument or other means whatever, with intent thereby to procure the miscarriage of such woman, unless it is necessary to save her life, shall be punished by imprisonment in the state prison for not less than two years nor more than five years.

Durbin reminded the representatives that courts “can’t make laws,” such as Roe v. Wade, which was a ruling, an unlawful one at that, that pro-baby-murderers have latched onto thinking it is law, much like the “conservative” Justice Brett Kavanaugh, who believes it is “settled law.”

Durbin pointed to ways that states have “flexed” their rights, according to the Tenth Amendment of the Bill of Rights. As examples, he pointed to the legalization of marijuana and protection of illegal immigrants in the US.

Durbin then charged the council with doing the same regarding abortion.

“I’d like to get us to a point where the Word of God has so affected us as a state that what’s popular is protecting babies,” Durbin said, “and we flex our state rights and we protect these children.”

I think the same could be said for sodomy laws. A Supreme Court ruling against Texas years ago has thought to be the “law of the land,” but it was, in fact, out of their jurisdiction, per the Constitution, to rule on in the first place, and that ruling would have only applied in that one instance.

There seems to be a move of God in our land among godly men on this issue.

In Oklahoma, this past election cycle, gubernatorial candidate Dan Fisher’s campaign ran on a message about the abolition of human abortion.

Additionally, former Oklahoma Senator and 2010 gubernatorial candidate Randy Brogdon supported Fisher by pointing to his own legislation that merely “regulated” abortion, but still allowed for thousands of babies to be murdered under that legislation in “pro-life” Oklahoma.

However, it isn’t just abortion that is being confronted before our representatives.

Pastor Matt Trewhella, who authored The Doctrine of the Lesser Magistrates

, spoke to the Senate Committee on Financial Services in his state regarding Article V and amendments and told them their duty was not to hide behind the skirt of more words and pieces of paper but to stop taking federal money and interpose themselves between the beast in DC and the people.

I have done the same thing at the state house in South Carolina with regards to the weasily attempts at Article V.

Well done Pastor Durbin! We need more courageous pastors to call our representatives to repentance and seek the face of God that He might heal our land and restore us back to the Law.