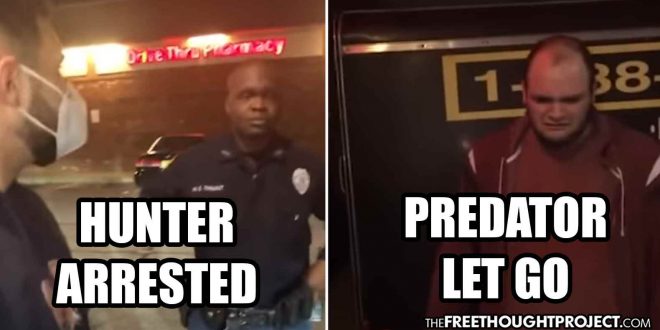 UNION, NJ – Another pedophile hunter has been arrested for obstruction of justice and disorderly conduct. A sexual predator hunter who goes by the name of “Ramy” impersonates underaged boys and girls in hopes predators will expose themselves and attempt to meet the underage child for sex, which is a crime. He has plenty of videos showing this success.

Ramy, 25, engaged in chat with a man who said he and his girlfriend wanted to have a three-way with the underage teen. The founder of Predator Poachers of New Jersey, Ramy, then met the man in the parking lot of a local pharmacy.

Very politely, one might say, Ramy approached the man who’d driven to the pharmacy. He told the man he wasn’t there to hurt him and only wanted to ask him a few questions. The unnamed John who was there to have sex with a 13-year-old girl appeared to believe Ramy was the police. He put his hands on the steering wheel in the 10 and 2 position and put the keys to his vehicle on top of his car.

Ramy made sure to tell the alleged child predator that he was not a cop. The man complied anyway.

The would be perpetrator exited the vehicle when asked to do so and followed Ramy over to the sidewalk of the pharmacy to have a little chat. Ramy assured the man if he told the “truth” the police would not be called.

Slowly and reluctantly the man then began to describe and admit he was there to engage in sex with the 13-year-old. The police then showed up and began to treat the situation as a crime scene, asking Ramy to move to his patrol car. The officer then began to speak with the would-be child rapist.

Soon after, a few more backup officers arrived and instead of allowing the predator hunters to do their work as good citizens, promptly took their phones away, which was recording the police contact live, and arrested Ramy, the founder and leader of the organization. Ramy was charged with Obstruction of Justice and Disorderly Conduct, even though he assured the officers he was working as an informant for a local detective.

In a recent interview with the Bunker Fly Podcast, Ramy told the show he got started in Mixed Martial Arts at an early age, 16. He said one of his teachers was very respected and knew MMA very well. He also said he had no idea the teacher was sexually abusing kids in his Taekwondo class.

From that point forward, he knew he had to do something. He said his martial arts training keeps him physically safe but he’s on a “mission”. He insists he helps attempt to rehab the perverted predators by taking them to sexaholics group meetings and therapy sessions as needed.

Ramy says he uses a multitude of social networking apps to “create a profile…using an underage minors either boy or girl…and then I always wait for them (the predators) to initiate the conversation.”

I make sure they initiate…and my first response is hey I’m 13, I’m 11, is this okay…from that point moving forward it becomes a psychological chess game with them…you guys would be in absolute shock what goes on behind the scenes.

The sexual predator hunter, who began his quest after learning his MMA teacher was a pedophile, is now fighting the charges against him. Instead of arresting the man who was there to have sex with a kid, the police (who apparently want to be the only ones running sting operations) arrested the good citizen attempting to protect society from the absolute lowest forms of humanity: pedophiles.

As TFTP has reported, police officers arresting sexual predator hunters is not new. In 2017, Rich Warner was charged with aggravated assault and publishing the identity of a person charged with a sex offense even though the person Warner uncovered was already a convicted pedophile who was prowling around the internet for his next underage victim.

Below is the video of Ramy being arrested for catching a sexual predator who was targeting a 13-year-old girl for sex. He told the Bunker Fly cast that catching predators takes a psychological toll on him which forces him to take several days off from seeing “dick pics” and “asshole pics”.

He also says the predators’ obsession with child pornography is exhausting and says their incredibly “needy”, whose appetites for sex with kids is only satisfied when they receive pictures of people they believe are children. Ramy says he is very careful not to break any laws in exposing pedophile predators.