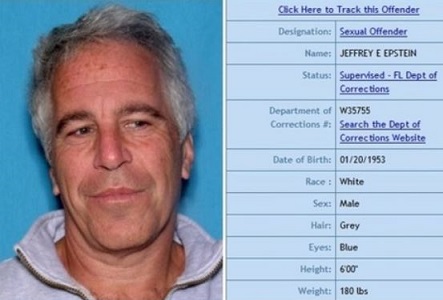 Jeffrey Epstein, 66, is a billionaire and notorious pedophile who owns a private island (Little Saint James) in the Caribbean, to which he’d flown Bill Clinton (Hillary, too), Prince Andrew, and homosexual pederast actor Kevin Spacey many times, as shown by flight logs of Epstein’s private Boeing 727. The plane is nicknamed the Lolita Express, and reportedly is outfitted with a bed where passengers had group sex with young girls.

Donald Trump also has ties to Epstein. As reported by The Daily Wire:

For his part, through his attorney Alan Garten, Trump said he has “no relationship” with Epstein other than Epstein having frequented Trump’s Mar-A-Lago in Miami. Garten said: “A lot of people hung out there, including Jeffrey Epstein. That is the only connection.” (Daily Wire)

Born in Brooklyn, New York, to a middle class Jewish family, Epstein somehow managed to become a billionaire. He worked as an options trader at Bear Stearns early in his career and then formed his own financial management firm, J. Epstein & Co., managing the assets of clients with more than $1 billion in net worth.

The FBI received accounts from about 40 under age girls who said they had been molested by Epstein. Despite this, in June 2008, the government agreed to allow Epstein to plead guilty to just one count of soliciting prostitution from an underage girl under Florida state law, for which he served 13 months in prison. He is a registered sex offender.

While in jail, Epstein received liberal work release privileges that required him to spend little time in a cell. Six days a week, he was picked up at the jail by his private driver and driven to an office in downtown West Palm Beach, where he spent up to 12 hours a day greeting friends, lawyers and several young women who were named by federal prosecutors as participants in his sex trafficking scheme.

Julie K. Brown reports for The Miami Herald, Feb. 7, 2019, that the Department of Justice (DOJ) has reportedly opened an investigation into the conduct of DOJ attorneys in the case, and whether they committed “professional misconduct” in their working relationship with Epstein’s attorneys.

The probe was opened in response to a request lodged by Sen. Ben Sasse (R-Nebraska), a member of the Senate Judiciary Committee, who raised questions about the case after reading the Miami Herald‘s 3-part series on how then-US attorney for the Southern District of Florida Alexander Acosta, 50, whom President Trump appointed secretary of labor, and other DOJ attorneys worked with defense attorneys to cut a lenient plea deal for Epstein back in 2008.

Epstein, 66, could have faced a possible life sentence for sex trafficking, but instead was secretly granted federal immunity, along with others who were part of the conspiracy, some of whom were named, others not.

Epstein was suspected by the FBI of running an international sex trafficking operation involving minors, and federal prosecutors had drafted a 53-page indictment that was shelved after Acosta signed off on a non-prosecution agreement in September 2007.

The reason for Jeffrey Epstein being secretly granted federal immunity? — He was an informant for the FBI, the director of which at the time is none other than Special Prosecutor Robert Mueller. Mueller, 74, was Director of the FBI from September 2001 to September 2013.

The Herald learned that, as part of the plea deal, Epstein provided what the government called “valuable consideration” for unspecified information he supplied to federal investigators. While the documents obtained by the Herald don’t detail what the information was, Epstein’s sex crime case happened just as the country’s subprime mortgage market collapsed, ushering in the 2008 global financial crisis.