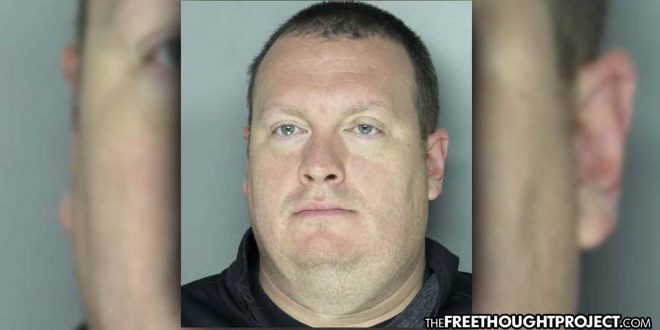 Elizabeth, PA — In the land of the free, there are two sets of justice systems — one for all those connected to that system, and one for everyone else. Time after time, we’ve seen police officers and politicians alike accused of terrible crimes and they escape with little to no jail. As the following case illustrates, police chiefs can betray everything they stand for, steal tens of thousands of dollars in heroin from their own department and face no jail.

The former Elizabeth Borough police chief, Timothy Butler, pleaded guilty to stealing heroin from the department’s evidence room but he will not go to jail. Instead of jail, Butler was sentenced to 55 months probation and 325 hours of community service.

According to police, Butler was arrested last year after they found more than 60 bundles of heroin and 3,230 individual “stamp bags” (given this name for being the size of a stamp and individually packaged for resale) in and around his desk — inside his police chief office.

Clearly he was unconcerned with hiding it because after all, he was the top cop. According to the criminal complaint, when asked how bad the evidence problem was, Butler said, “it was all gone.”

Had Butler not been a police officer, rest assured that he would have received a far harsher sentence than just probation. Indeed, many will argue — and rightfully so — that Butler should face harsher sentencing due to the betrayal of his duties as the top cop.

If we contrast Butler’s sentence with that of Alonte M. Bjorlie, a massive disparity becomes evident. Bjorlie was sentenced to 15 years in federal prison earlier this month after being found in possession of far less heroin than Butler and Bjorlie didn’t steal it from cops who kidnapped and caged people for having it.

While Butler should certainly face harsh sentencing for stealing from the evidence locker and betraying his oath to the office of chief, he should never be punished in a court of law for using and possessing heroin—no one should.

Criminalizing addiction and substance abuse has done nothing to curb use. America cannot arrest its way out of a drug problem. People are literally dying in the streets at an increasing rate and no amount of police state can stop it. In fact, since the inception of the drug war, drug addiction and overdoses have gotten worse. Why is that?

To understand the answers to that question, we have to look at how the state has essentially created and facilitated the current opioid epidemic in which America currently finds itself.

For decades, the US government has waged a war on drugs while granting the monopoly on opioid production to the pharmaceutical industry. For years, people who would’ve never thought of trying heroin trusted their doctors who were being paid large sums of money to prescribe them dangerous and addictive opioids. In some cases, people were given fentanyl for a broken ankle.

As the crack down on opioids came to a head, all the ‘legal’ drug addicts were forced into the black market to continue supporting their addictions. Soccer moms, business professionals, and police officers alike quickly found themselves buying highly dangerous fentanyl and heroin on the black market to support their government-approved pharmaceutical industry-sustained addictions.

Instead of helping these people, who clearly have physical and mental addictions and need help, the government simply began locking them in cages when they caught them with it.

Research — according to many law enforcement officials — shows that the cost of incarceration, especially for repeat drug offenders, is far higher than simply treating their addiction. It is also far better for a society who values freedom.

The good news is that some law enforcement across the country are realizing that treatment — not cages — curbs the problem of addiction far more successfully.

This realization has led to the creation of the Angel Program.

As the Boston Globe reports:

“As Gloucester police chief, Leonard Campanello pledged in 2015 that drug users could walk into the police station, hand over heroin, and walk out into treatment within hours — without arrest or charges. The concept of help rather than handcuffs became a national sensation.”

Campanello is no longer police chief there, but the program is continuing in Gloucester. The concept of helping addicts instead of criminalizing them is such a success, it’s been adopted by over 200 police agencies in 28 states.

Aside from the angel program, stopping the war on drugs is also having a heavy effect on reducing opioid overdoses—but it doesn’t go far enough fast enough. And that may be deliberate.

According to research from the National Institute on Drug Abuse, as of January 2019, “everyday, more than 130 people in the United States die after overdosing on opioids.” These overdoses can be attributed to prescription pain medications, which are prescribed like candy with little warning about how dangerously addictive they are; heroin, which many addicts turn to when they lose access to prescription opioids; and fentanyl, which has become increasingly popular despite its deadly track record.

The rise of the opioid epidemic at home has coincided with the United States’ control of poppy production worldwide. Before the U.S. invaded Afghanistan in 2001, there were around 189,000 heroin users in the United States. By 2016, that number had increased dramatically to 4.5 million users. The longest war in the nation’s history has resulted in the U.S. controlling 90 percent of the world’s opium supply and a massive increase in heroin users. Still think it’s a coincidence that no president wants to withdraw from the war?

The irony here is that government claims it can end the epidemic at the same time it is encouraging it by criminalizing a natural plant that has been shown to combat opioid addiction. A study published in August 2017 found that when participants used cannabidiol (CBD), it actually blocked the opioid reward in their brains, and as a result, “The finding that cannabidiol blocks opioid reward suggests that this compound may be useful in addiction treatment settings.”

Additionally, the National Institute on Drug Abuse has stated that “Medical marijuana products may have a role in reducing the use of opioids needed to control pain.” Studies have also shown that deaths from opioids plummet in states where cannabis is legal and that 80 percent of cannabis users give up prescription pills.

The federal government is also prolonging the opioid epidemic by pushing for a ban on kratom, a natural herb derived from the coffee plant that has served as a life-saving alternative for individuals who are addicted to opioids. Instead of acknowledging the success of kratom, the Food and Drug Administration is attempting to have it labeled as a Schedule I drug, which would mean that they claim it has no medicinal value.

In a letter to the FDA, a group of scientists argued that banning kratom would actually “increase the number of deaths of Americans caused by opioids because many people who have found kratom to be their lifeline away from strong opioids will be vulnerable to resumption of that opioid use, whether their prior opioid use was for relief of pain or due to opioid addiction.”

Unfortunately, tens of thousands more will likely die before any rational and scientific approach is brought forth by the state that will actually help to curb this epidemic. This police chief’s addiction problem should serve as a wake up call to the rest of the drug warriors who think locking people in cages is the proper way to fix a health problem. When you can’t even prevent the top most cop in the department from getting hooked, you are doing it wrong.