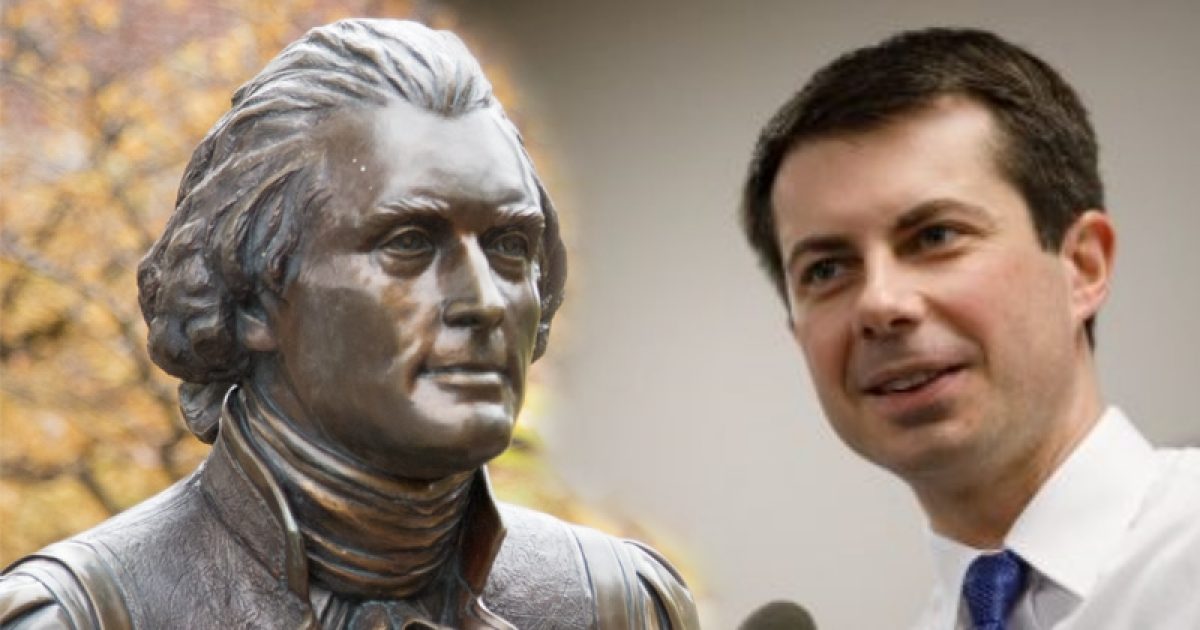 Homosexual presidential candidate Pete Buttigieg was questioned about one of America’s founding fathers, Thomas Jefferson, and whether or not his name should be erased from certain events that are celebrated. Buttigieg responded, “It’s the right thing to do.”

Appearing on The Hugh Hewitt Show on Friday, the South Bend Mayor, who is at war with our Creator who gave us our rights, which Thomas Jefferson wrote about in the Declaration of Independence, said that renaming Jefferson-Jackson Dinners to remove Jefferson’s name simply because he had slaves.

“Let’s go to policy now,” said Hewitt. “A very blunt question because you talk about going to every Jefferson-Jackson Dinner in Indiana when you were running statewide. Should Jefferson-Jackson dinners be renamed everywhere because both were holders of slaves?”

“Yeah, we’re doing that in Indiana,” said Buttigieg. “I think it’s the right thing to do.”

“You know, over time, you develop and evolve on the things you choose to honor,” he added. “And I think we know enough, especially Jackson, you know, you just look at what basically amounts to genocide that happened here.”

He continued, “Jefferson’s more problematic. You know, there’s a lot to, of course, admire in his thinking and his philosophy. Then again, as you plunge into his writings, especially the notes on the state of Virginia, you know that he knew that slavery was wrong.”

“And yet, he did,” said Buttigieg. “Now, we are all morally conflicted human beings.”

“It’s not like we’re blotting him our of the history books or deleting him from being the founding fathers,” he said in an attempt to not give away the store, but everyone knows exactly where all of this is going to erase American history.

“But, naming something after somebody confers a certain amount of honor,” he said. “The real reason I think there is a lot of pressure on this is the relationship between the past and present that we’re finding in a million different ways that racism isn’t some curiosity out of the past that we’re embarrassed about but moved on from. It’s alive, it’s well, it’s hurting people and it’s one of the main reasons to be in politics today is to try to change or reverse the harms that went along with that. We better find ways to live out and honor that principle.”

Well, part of that is to remember the past. If we don’t learn from it, we tend to relive the same mistakes from those that did.

Obviously, Buttigieg could use some history lessons himself. I suggest maybe he and President Trump have an actual Bible study on Genesis 19 with a competent man of God teaching them and I’d suggest he honor that principle of not blaming God for his own depravity, but rather man up and repent in a manner he seems to want to pontificate on the way Thomas Jefferson should have regarding slavery.

However, the hypocrisy is absolutely astounding with this guy.

As Mac Slavo reported less than two weeks ago, Buttigieg was pushing for “voluntary” forced slavery in the US.

While complaining to MSNBC‘s Rachel Maddow about what he sees as the United State’s lack of “social cohesion,” Buttigieg called for one year of national service as a solution. That’s forced labor, or gulags, or slavery no matter how you decide to slice it up. The USSA seems a more appropriate acronym to use when democrats discuss ideas.

As Reason so aptly put it: no doubt he would take offense at any comparison of his scheme to chattel slavery—a comparison such as that offered by former slave Frederick Douglass.

“What is freedom? It is the right to choose one’s own employment. Certainly, it means that, if it means anything,” Douglass thundered in response to Union General Nathaniel P. Banks’s policy as military commander of Louisiana of extracting one year of forced agricultural labor from freedmen on behalf of the federal government. “And when any individual or combination of individuals, undertakes to decide for any man when he shall work, where he shall work, at what he shall work, and for what he shall work, he or they practically reduce him to slavery.” –Reason

Although Buttigieg didn’t explicitly call for conscription to build “social cohesion,” he made it seem as though that’s an option. He allowed himself a little deniability by telling Maddow, “One thing we could do that would change that would be to make it, if not legally obligatory, but certainly a social norm that anybody, after they’re 18, spends a year in national service.”

It sure sounds like somehow, Buttigieg wants everyone to volunteer themselves for service to the government. It would be nice to know how he’d enforce any such human rights violation without force and putting guns to the heads of those who refuse to comply. And the public seems to disagree with his enslavement idea.

A 2017 survey by Gallup found 49 percent of Americans favoring the idea and 45 percent opposed. Unsurprisingly, support for mandatory national service rises among older cohorts who are highly unlikely to ever receive a draft notice, winning the nod from a solid two-thirds of those over 65. By contrast, the 18- to 29-year-olds actually targeted by forced labor schemes despise the idea by 57 percent to 39 percent. –Reason

Buttigieg seems to think that allowing a choice of civilian or military tasks to fulfill the whims of politicians addresses concerns about mandatory national service. But when compared to historical slavery, telling a slave they can choose to pick cotton or they can sow seeds still isn’t freedom.