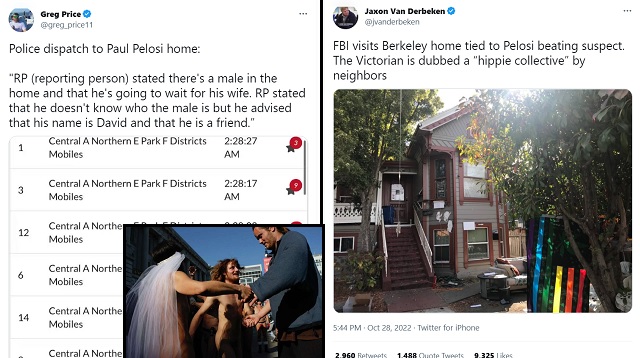 The San Francisco nudist who was found by police in his underwear in Paul Pelosi’s home at 2AM while Nancy was out of town and has an LGBT flag outside his commune was described by Paul to 911 dispatch as a male “friend” whose “name is David” but whom he “doesn’t know.”

From Breitbart, “Police Dispatch Audio: Paul Pelosi When Calling Cops Said ‘He Doesn’t Know Who the Male Is but He Advised that His Name Is David and He Is a Friend'”:

Paul Pelosi reportedly told 911 dispatch that the individual who allegedly attacked him with a hammer in his home “is a friend,” according to a police dispatch call early Friday morning.

The alleged intruder reportedly attacked Paul Pelosi with a hammer, which forced him to undergo emergency surgery for his injuries.

Officers later identified 42-year-old Berkeley resident David DePape as Pelosi’s attacker. DePape was reportedly wearing only underwear when officers arrived on the scene. He was taken into custody and will be charged with multiple felonies, including attempted murder, San Francisco district attorney Brooke Jenkins announced.

Emergency dispatch officials provided the police officers with an address on the 2600 block of Broadway street in San Francisco’s Pacific Heights neighborhood, according to a dispatch call that took place around 2:28 a.m. on Friday.

A dispatch official calls out during the call to a police car with specific instructions and an address.

“Copy,” replied the person on the other end of the call.

The dispatch official then said that Pelosi informed 911 that he did not know who the attacker was but gave his name and then explained that “he is a friend.”

"RP (reporting person) stated there's a male in the home and that he's going to wait for his wife. RP stated that he doesn't know who the male is but he advised that his name is David and that he is a friend.”
pic.twitter.com/O0HeS0s0I5

“RP [Reporting Person] stated that there’s a male in the home and that he’s going to wait for his wife. RP stated that he doesn’t know who the male is but he advised that his name is David, and that he is a friend,” the dispatch official said. “RP sounded somewhat confused.

Interestingly, a photo of the outside of the house revealed several signs supporting left-leaning causes, which stands in contrast to attempts to link the attacker to “MAGA extremists.”

For example, an American flag with rainbow colors and marijuana leaves can be seen in front of the house. Looking closer, a handwritten “Black Lives Matter” sign can be seen hanging in one of the home’s windows.

Further, another sign posted in a different window reads, “Berkeley Stands United Against Hate,” which refers to a Berkeley-based organization that aims to “stop the hate and implicit biases that are a dangerous threat to the safety and civility of our neighborhoods, towns and cities.”

This story appears to be taking a very strange turn.

A guy in his underwear with a hammer managed to break into the home of the person third in line to the presidency and police happened to arrive right as he assaulted Paul Pelosi after being called on a 2 am wellness check.

Definitely not incredibly weird at all.

So in Pelosi’s house in his underwear, alone with her husband while she was away… https://t.co/r4ouRl2AoU

Yo what kind of home invasions include bathroom breaks?? pic.twitter.com/U6Gjj6alRl

The glass is broken OUTWARD. That’s your first clue. https://t.co/2Px1aUbFQr

It doesn’t sound like we’re being given all the facts here, folks.

We have been to many social events in the immediate vicinity as well. There are security cameras everywhere, and many homes have private security. Whatever happened, law enforcement should have plenty of evidence to get to the bottom of it and find the attacker(s).

If any of this incident was caught by surveillance video — and it most certainly should have been — it needs to be released ASAP.

For people not paying attention, the story now is that a nudist in his underwear with a hammer snuck into the Pelosi residence, a wellness check sent the police there, they knocked on the door, a THIRD person let them in, at which point the man began assaulting Paul Pelosi. https://t.co/GVESKliweg