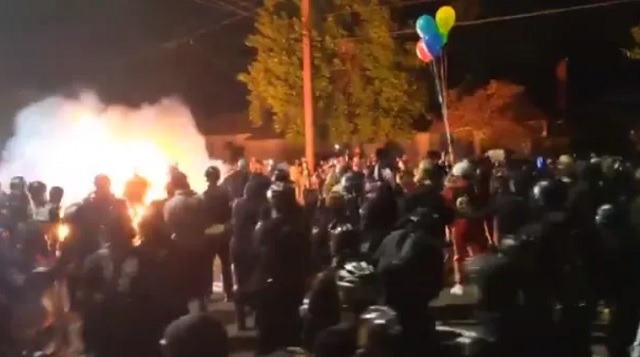 Life comes at you fast!

Graphic: Another angle of the person being set on fire by a Molotov cocktail thrown by antifa militants in SE Portland. Rioters try to help but don’t do much. Cops are the ones who rush in & put out the flames. Video by @BGOnTheScene. #PortlandRiots pic.twitter.com/9gNFo73Lyc

The incident happened on Sunday night.

It’s rather remarkable how only one guy knew the way to put out a small fire is by smothering it. The guy who was set ablaze seemed to think you put out a fire by doing a jig.

You can see the Molotov was thrown from further back by someone in the crowd:

You can see the Portland protester running around with their legs on fire at the beginning of this videopic.twitter.com/O6b1fC0OHq

The “abolish the police” rioter was saved by the police.

ANTIFA lights themselves on fire—

5 minutes into the March, officers attempted to put him out. pic.twitter.com/FVBoEeQJVH

There were some hilarious memes made out of the videos, including this one shared by President Trump:

This one was my favorite:

There was another incident like this a few months ago in Portland, as well:

Rioters outside the Portland federal courthouse accidentally set their comrade on fire with a flammable device. #antifa #PortlandRiots pic.twitter.com/PLQbumM7fT

This is what happens when you throw like a girl.