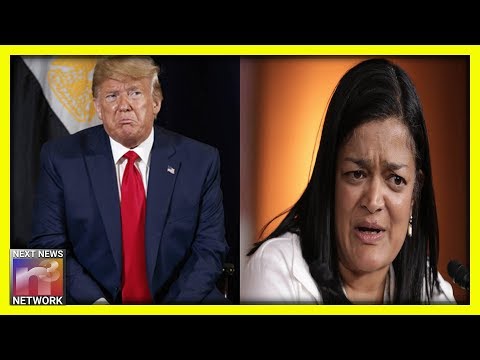 The Democrats are desperate and it is showing more and more every day.

But Pramila Jayapal is past the point of desperation and leaning toward “Adam Schiff crazy”.

Give it up Pramila and save your own butt while you still can.

Rewriting the rules of impeachment proceedings was not?

Far-left Democrat Rep. Pramila Jayapal (WA) said on Friday that President Donald Trump’s attempts to go through the court system on matters related to the Democrats’ partisan attempt to impeach the him “is, in and of itself, obstruction of justice.”

Jayapal, who appeared on CNN’s “Right Now” with host Brianna Keilar, made the remarks after CNN played a clip of House Speaker Rep. Nancy Pelosi (D-CA) speaking at a news conference.

“They keep taking it to court, and, no, we’re not going to wait until the courts decide,” Pelosi said. “That might be information that’s available to the Senate in terms of how far we go and when we go. But we can’t wait for that because, again, it’s a technique. It’s obstruction of justice, obstruction of Congress. So we cannot let their further obstruction of Congress be an impediment to our honoring our oath of office.”

“So if Democrats aren’t waiting for the courts and there is clear stonewalling from the White House, which Democrats believe, clearly, is obstruction of justice, how is that not enough to proceed forward?” Keilar asked.

“Well, I think that what you are seeing is exactly what you’re saying,” Jayapal responded. “The evidence is clear. It has been clear. And now it has been corroborated in multiple, devastating ways for the president.”

Read the rest at The Daily Wire…

Democrats are desperate and scrambling to make something stick and it’s obviously not looking good.

They have rewritten the law on impeachment proceedings, and it still isn’t working.

They have asked for witnesses to not have to face the accused which would seem to violate the 6th amendment.

In all criminal prosecutions, the accused shall enjoy the right to a speedy and public trial, by an impartial jury of the State and district wherein the crime shall have been committed, which district shall have been previously ascertained by law, and to be informed of the nature and cause of the accusation; to be confronted with the witnesses against him; to have compulsory process for obtaining witnesses in his favor, and to have the Assistance of Counsel for his defence.

Does that not apply to impeachment proceedings?

Actually it does not apply because there have been no actual crimes presented in these hearings.