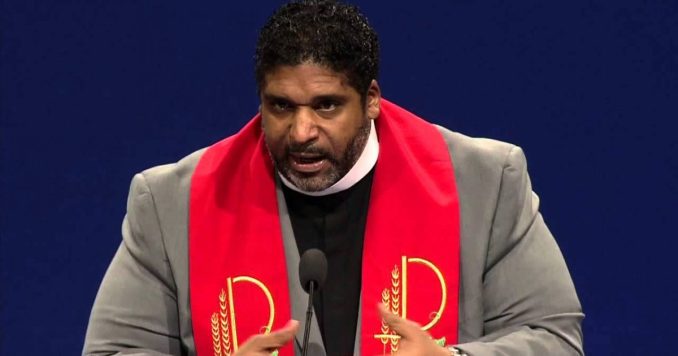 When politicians aka criminals in government misrepresent God’s word, it is to be expected since these individuals seek to justify their bad behavior and coerce the weak-minded to accept their immoral, illegal and corrupt ways. However, when a man professing to be a “man of God” misrepresents the Word of God to promote the immoral ways of socialism, which is against the Word of God, this is an affront to Christians everywhere, particularly to those gullible enough to buy the snake oil. Rev. (questionable) William Barber did just that when he spoke at the DNC summer meeting when he said if Republicans labeled free health care as socialism, then Republicans should “acknowledge that the Bible must then promote socialism.”

A speaker at the Democratic National Committee summer meeting Friday said if free health care is labeled “socialism” by Republicans, then they should “acknowledge that the Bible must then promote socialism.”

“When we embrace moral language, we must ask does our policy care for the least of these? Does it lift up those who are most marginalized and dejected in our society? Does it establish justice? That is the moral question,” said Rev. William Barber, who has spoken at several DNC meetings. “If someone calls it socialism, then we must compel them to acknowledge that the Bible must then promote socialism, because Jesus offered free health care to everyone, and he never charged a leper a co-pay.”

DNC chair Tom Perez and others in audience gave a standing ovation before Barber took a shot at Republicans, saying, “If you want to have a moral debate, bring it on, baby.”

It’s unsurprising that this fake “reverend” stood in front of a bunch of godless people declaring the miracles of healing by Jesus Christ as “free health care”. Since Jesus fed the masses, turning a small amount of fish and bread into enough for all, does that mean Jesus promoted “free food” for all? Hardly. These were some of the miracles performed by Jesus, the Son of God, confirming His divinity and Godly power. Moreover, this was an example of the commandment to Christians to be charitable to your fellow man. When government takes from one individual to provide for another, this is not charity or charitable; it is theft, which God commanded against.

Barber didn’t stop there. He went on to misconstrue the Constitution.

Barber stated, “The Bible says a nation will be judged by how it treats the poor and the sick and women and the immigrants. The Bible says that God makes it rain on the just and unjust alike. If you want to call caring for folks socialism, then the Constitution is a socialist document because it calls us to promote the general welfare and to establish justice.”

William Barber needs to be denounced by all true men of God as a heretic.

First of all, Barber misconstrues the definition of “welfare” where government is concerned. Webster’s 1828 dictionarydefines “welfare” as “exemption from any unusual evil or calamity; the enjoyment of peace and prosperity, or the ordinary blessing of society and civil government; applied to states.” The Declaration of Independence declared that man instituted government to secure the individual God-given rights of the people to include life, liberty and the pursuit of happiness (little intrusion into the lives of the people). The justice established by the Constitution limits federal government to few powers that secure and protect the God-given individual rights of the people concerning the authority given it by the Constitution; the States are charged with securing and protecting the rights of the people in the other areas. When it comes to immigrants, government protects our rights by creating and enforcing immigration law, bringing justice upon those who violate those laws. Those who come into this republic illegally are afforded justice according to the law. Justice is to be administered equally across all socio-economic demographics. However, the government is the worst violator of administering equal justice since the political and wealthy elite are allowed to violate the law with impunity.

Barber stated God would judge nations by how that nation treats its poor, sick, women and immigrants. But, does that mean government? No. In biblical times, nations were people groups. So, when God calls forth the nations before Him, He will separate the sheep (His followers) from the goats (His deniers/rejecters). It is the sheep that will inherit the kingdom of Heaven while the goats will be cursed into the eternal fire prepared for the devil and his angels – Matthew 25: 31-46. So Barber is using the term “nation” to mean government, which is not what the Bible conveys.

Moreover, it was individuals like Hubert Humphrey who stated, “the moral test of government is how that governmenttreats those who are in the dawn of life, the children; those who are in the twilight of life, the elderly; those who are in the shadow of life; the sick, the needy and the handicapped.” When looking at Humphrey’s statement with a Biblical and Constitutional eye, the meaning of his statement is simple – government is obligated to treat every equally under its laws, securing and protecting the rights of all the people regardless of status. However, this statement viewed with an anti-biblical and anti-constitutional eye conveys that government should be caring for these groups of people through any means necessary. It is this view that Barber supports. FYI – Humphrey was a Democrat. Former President Jimmy Carter intimated the same thing.

Barber ends up perverting the very doctrine of Christianity – the commandments Jesus gave to His followers – to include the institution of government that must engage in theft, an immoral behavior, to implement care for the “marginalized and dejected in our society.” When Jesus spoke about uplifting the marginalized and dejected, He meant with the good news of the gospel and individual charitable works to help individuals provide for themselves. Jesus spoke of the church (the people who follow Him) to attend to those in need for spiritual healing and providing assistance for material needs to the poor. Never once does Jesus promote the government robbing the people to perform “charity.” Charity is not a function of government.

And, once again, Barber misuses scripture. When Jesus gave the Sermon on the Mount, Matthew 5: 45 tells us Jesus said, “He makes His sun rise on the evil and the good, and sends rain on the just and on the unjust.” (ESV) What does this mean? Jesus tells us to love our enemies as we love our neighbors. God shows His love to those who are His enemies (rejecters) by providing good weather to all the people, since society was majorly agrarian at the time. Barber is using only part of the scripture to convey rain as some type of punishment God will convey upon both His followers and enemies if the people of this republic do not accept government socialism, when that is not the biblical reference at all.