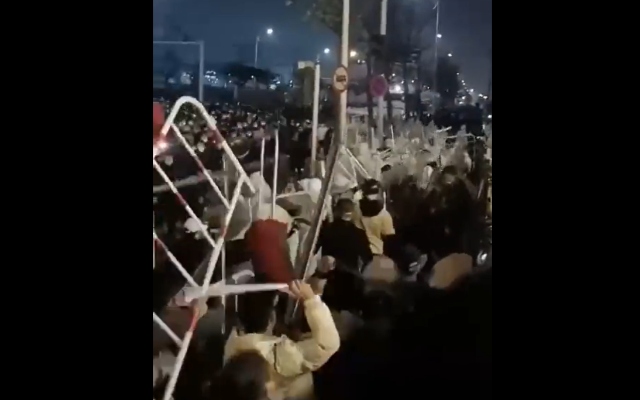 (Natural News) A growing portion of the Chinese people, who are usually docile and deferential to the authoritarian Communist rulers there, are fed up after nearly two years worth of “Zero COVID” policy lockdowns, and they are lashing out.

According to social media posts that have leaked from China, protests are spreading now from Beijing and the far western Xinjiang region to a multitude of other major cities, including Wuhan — where COVID-19 was manufactured and either released or escaped — and Shanghai, as well as the eastern city of Nanjing.

Protests broke out in earnest last week following mass demonstrations on Friday in Urumqi, which is the capital of Xinjiang, after a fire killed dozens of residents trapped inside the building thanks to a lockdown that has lasted now for more than 100 days. While Chinese officials say around 10 people were killed, citizens are reporting deaths numbering as high as 40.

The current unrest is rare in China, where the Communist Party has a ‘zero tolerance’ policy on protests to any dictum or mandate. Still, Chinese citizens know that over the past decade, crackdowns on any dissent have grown as well, and that isn’t helping quell the current unrest as more citizens gamble that this may be the time to push for real change in their country.

As The Wall Street Journal reports, “Having protests over the same issue break out in multiple Chinese cities is almost unheard of, outside of nationalist outpourings, such as anti-Japanese protests.”

Since the Tiananmen Square protests in 1989, the ruling party has allowed some local demonstrations, but made it a priority to prevent nationwide protests.

On Saturday, videos circulating on social media showed crowds gathering on a street in central Shanghai calling for a lifting of lockdowns. The videos were verified by Storyful, a social-media research company owned by News Corp, parent company of The Wall Street Journal.

Chilling. The national anthem. Especially that phrase ‘qi lai!’ (‘stand up!’). Never seen anything like this. Well, except in #HongKong… pic.twitter.com/OGYZwNgnKi

“Demonstrators held blank white banners and lit candles to honor the victims in the Urumqi fire,” according to Zero Hedge.

So far, the Chinese government is tolerating the demonstrations for the most part, most likely because they have grown so large. One protestor in Shanghai, for instance, told the BBC that he was “shocked and a bit excited” to see so many people taking part in the protests on the streets, adding it was the first such large-scale demonstration of dissent. Meanwhile, a woman told the British outlet that police have said they feel “the same as you” about the demonstrations, but “they wear their uniforms, so they’re doing their job.”

One Western China expert, David Moser, noted on Twitter: “I’ve lived in China for 30 years, and I’ve never seen such a brazenly open and sustained expression of rage against the PRC govt. WeChat is exploding with protest videos and furious vitriol, and civil disobedience is becoming rampant. This is a serious test of CCP governance.”

I've lived in China for 30 years, and I've never seen such a brazenly open and sustained expression of rage against the PRC govt. WeChat is exploding with protest videos and furious vitriol, and civil disobedience is becoming rampant. This is a serious test of CCP governance.

William Yang, an East Asia correspondent for German media outlet DW, added: “More from protesters who participated in #Shanghai‘s protest: ‘The main demand was to put an end to the zero-Covid measures. Some people expressed their dissatisfaction with the Communist Party, while others mourned the death of those in the fire in Urumqi.’”

More from protesters who participated in #Shanghai's protest: "The main demand was to put an end to the zero-Covid measures. Some people expressed their dissatisfaction with the Communist Party, while others mourned the death of those in the fire in Urumqi."