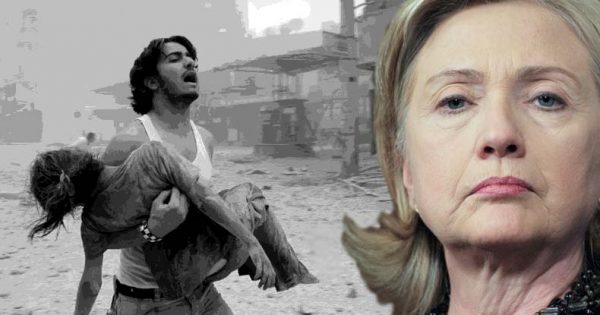 In April of 2013, Britain and France informed the United Nations that there was credible evidence that Syria used chemical weapons against rebel forces. Only two months later, in June of 2013, the United States concluded that the Syrian government did, in fact, use chemical weapons in its fight against opposition forces. President Obama immediately used this chemical attack as a pretext for invasion and authorized direct U.S. military support to the rebels, according to the White House.

Since the US has been funding these ‘moderate rebels’ more than 250,000 people have been killed, over 7,600,000 have been internally displaced, and 4,000,000 other human beings have been forced from the country entirely.

All of this death and destruction carried out by a sadistic army of rebels who’ve been funded and armed by the United States government, based on, what we are now told, was a complete fabrication.

World renowned journalist Seymour Hersh has revealed, in a series of interviews and books, that the Obama Administration falsely blamed the government of Syria’s Bashar al-Assad for the sarin gas attack that Obama was trying to use as an excuse to invade Syria.

As Eric Zuesse explained in Strategic Culture, Hersh pointed to a report from British intelligence saying that the sarin that was used didn’t come from Assad’s stockpiles. Hersh also said that a secret agreement in 2012 was reached between the Obama Administration and the leaders of Turkey, Saudi Arabia, and Qatar, to set up a sarin gas attack and blame it on Assad so that the US could invade and overthrow Assad.

“By the terms of the agreement, funding came from Turkey, as well as Saudi Arabia and Qatar; the CIA, with the support of MI6, was responsible for getting arms from Gaddafi’s arsenals into Syria.”

Hersh didn’t say whether these ‘arms’ included the precursor chemicals for making sarin which were stockpiled in Libya, explains Zuesse in his report. But there have been multiple independent reports that Libya’s Gaddafi possessed such stockpiles, and also that the US Consulate in Benghazi Libya was operating a “rat line” for Gaddafi’s captured weapons into Syria through Turkey.

While Hersh didn’t specifically say ‘Clinton transported the gas,’ he implicated her directly in this ‘rat line’ of arms which the sarin gas was part of.

Of Hillary Clinton’s involvement, Hersh told AlterNet that Ambassador Christopher Stevens, who died in the storming of the Benghazi embassy,

“The only thing we know is that she was very close to Petraeus who was the CIA director at the time … she’s not out of the loop, she knows when there’s covert ops. That ambassador who was killed, he was known as a guy, from what I understand, as somebody, who would not get in the way of the CIA. As I wrote, on the day of the mission he was meeting with the CIA base chief and the shipping company. He was certainly involved, aware and witting of everything that was going on. And there’s no way somebody in that sensitive of a position is not talking to the boss, by some channel.”

Backing up Hersh in his claims is investigative journalist Christof Lehmann, who after the attacks discovered an evidence trail leading back to the Chairman of the Joint Chiefs of Staff Martin Dempsey, CIA Director John Brennan, Saudi Intelligence Chief Prince Bandar, and Saudi Arabia´s Interior Ministry.

As Lehmann explained, Russian and other experts have repeatedly stated that the chemical weapon could not have been a standard issue Syrian chemical weapon and that all available evidence — including the fact that those who offered first aid to the victims were not harmed — indicates the use of liquid, home made sarin. This information is corroborated by the seizure of such chemicals in Syria and in Turkey.

While this is certainly no silver bullet, this implication should not be glossed over. As the Free Thought Project has reported extensively in the past, the presidential candidate has ties to international criminal cartels who’ve been funding her and her husband for decades.

When Hillary Clinton became secretary of state in 2009, the William J. Clinton Foundation agreed to disclose its donors at the request of the White House. According to a memorandum of understanding, revealed by Politifact, the foundation could continue to collect donations from countries with which it had existing relationships or running grant programs.

The records would show that of the 25 donors who have contributed more than $5 million to the Clinton Foundation throughout the years, six are foreign governments, with the largest contributor being Saudi Arabia.

The importance of Saudi Arabia’s role in funding Clinton is tremendous, as the Syria/Saudi relationship over the last half century is what this civil war is all about.

As Zuesse points out in his article on Strategic Culture,

When the interviewer asked Hersh why Obama is so obsessed with replacing Assad in Syria, since “The power vacuum that would ensue would open Syria up to all kinds of jihadi groups”; and Hersh replied that not only he, but the Joint Chiefs of Staff, “nobody could figure out why.” He said, “Our policy has always been against him [Assad]. Period.”

This has actually been the case not only since the Party that Assad leads, the Ba’ath Party, was the subject of a shelved CIA coup-plot in 1957 to overthrow and replace it; but, actually, the CIA’s first coup had been not just planned but was carried out in 1949 in Syria, overthrowing a democratically elected leader, in order to enable a pipeline for the Sauds’ oil to become built through Syria into the largest oil market, Europe; and, construction of the pipeline started the following year. But, there

But, there were then a succession of Syrian coups (domestic instead of by foreign powers – 1954, 1963, 1966, and, finally, in 1970), concluding in the accession to power of Hafez al-Assad during the 1970 coup. And, the Sauds’ long-planned Trans-Arabia Pipeline has still not been built. The Saudi royal family, who own the world’s largest oil company, Aramco, don’t want to wait any longer. Obama is the first US President to have seriously tried to carry out their long-desired “regime change” in Syria, so as to enable not only the

The Saudi royal family, who own the world’s largest oil company, Aramco, don’t want to wait any longer. Obama is the first US President to have seriously tried to carry out their long-desired “regime change” in Syria, so as to enable not only the Sauds’ Trans-Arabian Pipeline to be built, but also to build through Syria the Qatar-Turkey Gas Pipeline that the Thani royal family (friends of the Sauds) who own Qatar want also to be built there. The US is allied with the Saud family (and with their friends, the royal families of Qatar, Kuwait, UAE, Bahrain, and Oman). Russia is allied with the leaders of Syria – as Russia had earlier been allied with Mossadegh in Iran, Arbenz in Guatemala, Allende in Chile, Hussein in Iraq, Gaddafi in Libya, and Yanukovych in Ukraine (all of whom except Syria’s Ba’ath Party, the US has successfully overthrown).

Matt Agorist is an honorably discharged veteran of the USMC and former intelligence operator directly tasked by the NSA. This prior experience gives him unique insight into the world of government corruption and the American police state. Agorist has been an independent journalist for over a decade and has been featured on mainstream networks around the world. Follow @MattAgorist