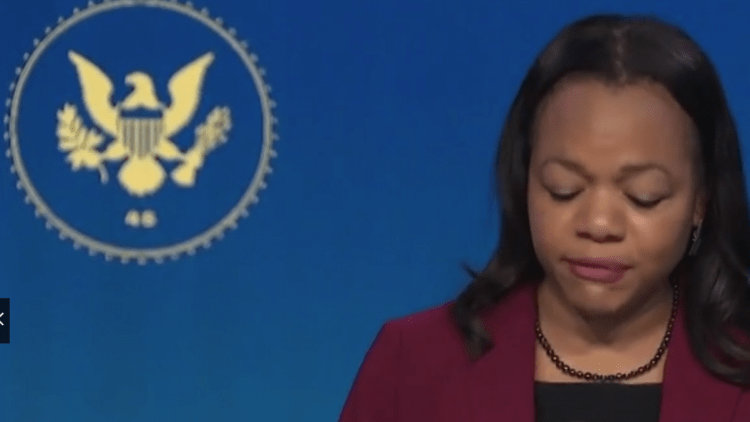 Not a surprise. Kirsten Clarke, Biden’s nominee to head civil rights at the DOJ, has a history of black nationalism, and sympathy for racism and antisemitism.

Kristen Clarke, Joe Biden’s nominee for assistant attorney general of the United States, once promoted racist pseudoscientific quackery, arguing that the human brain was structured in a way that makes Black people superior to white people, and that “human mental processes” in the brain have chemicals that imbue one race with “superior physical and mental abilities” and “spiritual abilities.”

And then there’s the antisemitism.

Wellesley Professor Tony Martin spoke at Harvard at the invitation of the Black Students Association (BSA). Martin, the author of an anti-Semitic tract entitled The Jewish Onslaught, used his Harvard forum to denounce the Jewish tradition and the Jewish people for holding a “monopoly” on centuries-worth of the notion of divinely ordained African inferiority. Repeating his belief that the “so-called Sages” of the Babylonian Talmud were the earliest racists of recorded history, Martin urged Harvard students to consider The Bell Curve, a controversial new book linking race and intelligence, as only the latest manifestation of a racist tradition spawned by Jews.

Sitting in Boylston Auditorium, listening to my heritage be defamed and lied about, my thoughts turned away from the anti-Semite at the lectern and to the young woman who had introduced him. In fact, immediately after the introduction, Martin lavished praise on Kristen M. Clarke ’97, the BSA president, who, he said, had courageously invited him “in the face of enormous pressure from the forces of reaction.”

“Professor Martin is an intelligent, well-versed Black intellectual who bases his information on indisputable fact,” she said.

Archived copies of a scholarly journal show Justice Department nominee Kristen Clarke listed on the masthead alongside an anti-Semitic writer with whom she claimed under oath she has never collaborated.

The revelation could prompt charges that she gave inaccurate answers to the Senate Judiciary Committee. Clarke told lawmakers that she has never worked with Amiri Baraka, the Marxist and anti-Semitic black nationalist who accused Israel of having advanced knowledge of 9/11 in a 2002 poem. Both Clarke and Baraka are listed as editors of the journal Souls at least eight times over two years.

In a written supplement to Clarke’s April 14 confirmation hearing, Sen. Mike Lee (R., Utah) asked Clarke a series of questions about Baraka and an article he wrote comparing police officers and judges to the Ku Klux Klan. The article is called “Mumia, Lynch Law, and Imperialism.” “Mumia” refers to Mumia Abu-Jamal, who is serving a life sentence without the possibility of parole for murdering a police officer in 1981.

Lee asked Clarke whether she served “on the editorial staff of a journal with Amiri Baraka.” She answered “no.”

The Washington Free Beacon reviewed eight editions of the journal in question, Souls, A Critical Journal of Black Politics, Culture, and Society, on Taylor & Francis, the international publisher of scholarly journals. The editions were published quarterly in 1999 and 2000. In each edition, Clarke is listed on the masthead as an assistant editor while Baraka is listed as a contributing editor.

Kristen Clarke forwarded the Baraka essay in an email on June 25, 1999, to her mentor, the late historian Manning Marable.

She suggested that the essay, entitled “Mumia, ‘Lynch Law’ & Imperialism” be placed in a magazine Marable edited and used for a panel on the death penalty.

“Here is a piece for the magazine & the panel 3 Race and The Death Penalty,” Clarke wrote to Marable.

Just to give you some context about how Amiri Baraka’s racism was, here’s some of his poetry. Baraka’s poetry is art in the same way that Hitler was an artist. I’m not making the connection because everybody bad is Hitler. I’m using Baraka’s own words.

“I got the extermination blues, jew-boys. I got the Hitler syndrome figured… So come for the rent, jewboys, or come ask me for a book, or sit in the courts handing down your judgements still I got something for you, gonna give it to my brothers, so they’ll know what your whole story is, then one day, jewboys, we all, even my wig wearing mother gonna put it on you all at once.”

Later in “Confessions of a former Anti-Semite,” Baraka explained these lines as meaning “Jews had stolen Black secrets and then said that Hitler disliked Jews because he could smell the contact with Black on them.”

“Atheist jews double crossers stole our secrets crossed the white desert to spill them,” Baraka ranted. “The fag’s death they gave us on a cross… they give us to worship a dead jew and not ourselves.” “The empty jew betrays us, as he does hanging stupidly from a cross, in an oven, the pantomime of our torture, so clearly, cinemascope the jews do it… the little arty bastards talking aritmetic they sucked from the arab’s head. Suck your pricks. The best is yet to come. On how we beat you and killed you.”

“We are all beautiful (except white people, they are full of, and made of sh*t),” Amiri Baraka wrote. “Come up, black dada / nihilismus. Rape the white girls. Rape / their fathers. Cut the mothers’ throats,” he wrote.

What kind of decent person would be associated with filth like this? No one. Only a Biden nominee would.

Imagine a Republican nominee circulating material from anyone half this hateful and deranged. But the media keeps playing defense for Clarke.