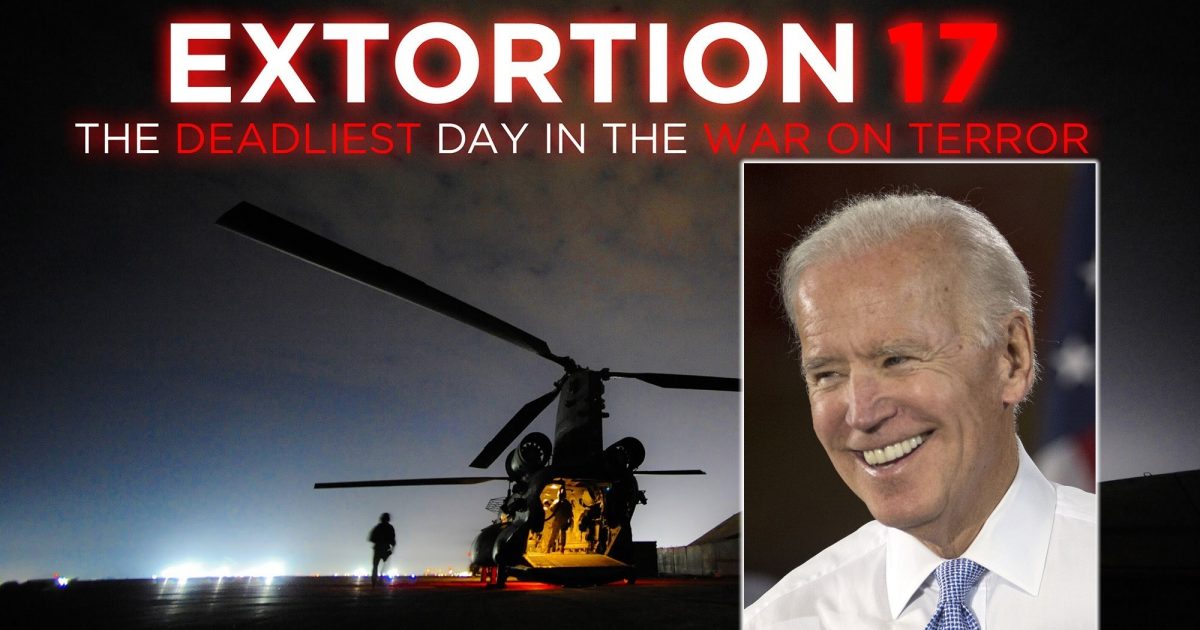 Over the weekend, Daniel Greenfield reminded America of one father that blamed 2020 presidential candidate Joe Biden for his son’s death. Many in America have never even heard of the single largest loss of life in the War on Terror, Extortion 17. It was a scandal bigger than Benghazi. Yet, because Joe Biden compromised national security by speaking of who allegedly killed Osama bin Laden, it cost the lives of 31 Americans on board Extortion 17, including 17 US Navy SEALS.

Not only were the SEAL team members furious and shocked over the big mouths of the Obama administration beating its chest with pride over the success of killing bin Laden, but the families were equally enraged. The message compromised the safety of the unit, as well as their families.

At a gathering at the Ritz Carlton hotel in Washington, D.C. for the 50th anniversary of the Atlantic Council, a mere two days after the raid, Vice President Joe Biden remarked to the audience,

“Let me briefly acknowledge tonight’s distinguished honorees: Adm. Jim Stavridis is the real deal; he could tell you more about and understands the incredible, the phenomenal, the just almost unbelievable capacity of his Navy SEALS and what they did last — last Sunday.”

“And what was even more extraordinary was — and I’m sure former administration officials will appreciate this more than anyone — there was such an absolute, overwhelming desire to accomplish this mission that although for over several months, we were in the process of planning it, and there were as many as 16 members of Congress who were briefed on it, not a single, solitary thing leaked. I find that absolutely amazing,” Biden added.

In 2012, Karen Vaughn, joined by her husband Billy, on Fox News said, As soon as Joe Biden announced that it was a SEAL Team who took out Bin Laden, within 24 hours, my son called me and I rarely ever heard him sound afraid in his adult life…. He said, ‘Mom, you need to wipe your social media clean…your life is in danger, our lives are in danger, so clean it up right now’.”

Mr. Vaughn, showing his anger and disgust with Biden, ripped the media. “The media has let this man get away with saying ‘Uncle Joe’s gaffes, Uncle Joe’s gaffes,” he said. “This is not Uncle Joe and he’s not some senile old grandfather. He is the second in command of the most powerful country in the world and he needs to take responsibility for the comments he makes and quit being given a pass.”

He’s exactly right. Anyone that thinks that Joe Biden just forgot about national security here is oblivious to how politics works.

As mentioned over the weekend, Charles Strange, father of fallen SEAL Michael Strange, previously recalled how his son responded to the new that Joe Biden had mentioned SEAL Team Six carrying out the bin Laden operation.

Mr. Strange said his son and others in the team echoed what the Vaughns said their son had told them.

Strange told talk show host Michael Savage that on at least three separate occasions, in June 2011, his son grabbed him by the arm and announced that he had prepared his will.

Savage asked: “Your son knew he was being sent to his death?”

“They knew,” Strange answered. “They knew something was up. Every one of them.”

Forget Edward Snowden. Joe Biden made one of the biggest leaks of national security information in recent history!

If the lives of Americans matter and if justice matters, then Joe Biden should not only not be considered for the Oval Office, but rather he should be subject to charges of treason for opening his big mouth, which resulted in these men’s deaths taking place just months later.

If you are a person who has never heard of Extortion 17, I encourage you to read some of my previous articles on the matter.