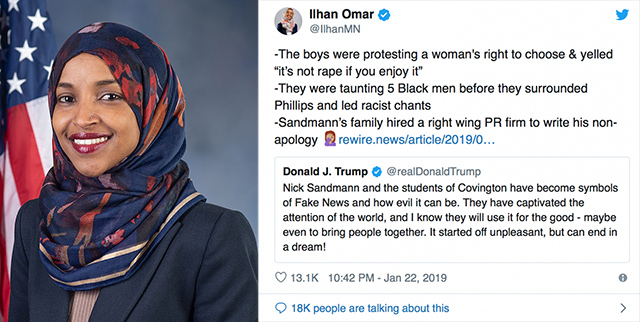 After President Trump defended the students on Tuesday morning and said they’ve “become symbols of Fake News and how evil it can be,” Omar tweeted in response on Tuesday night: – Multiple students from Covington said they don’t know the kid who shouted that and he doesn’t go to their school. Regardless, the kid said it in response to racist taunts from the Black Hebrew Isrealites as a joke.

-The students were taunted by the “5 Black men” and called “crackers” and other racial slurs and Nathan Phillips aggressively walked into them to bang a drum inches from Nick Sandmann’s face and loudly chant.

-He was up against the entire lying media smearing him 24/7. His family hired a firm to help them defend themselves from a torrent of smears by multi-billion dollar news organizations. His apology was excellent and it was even better that he refused to apologize.

Omar deleted the tweet by late Wednesday morning after being widely mocked and threatened with a libel suit.

Nonetheless, she followed it up with an incoherent rambling in response to this tweet from Caleb Hull: Can anyone make sense of this gibberish?

She seems to believe she caught Hull being a “hypocrite” because he shared her tweet which he believes is misinformation in order to “own” her.

One thing we know for sure: Omar is still writing her own tweets!

Let’s hope she never lets a Democratic PR firm take over her account!