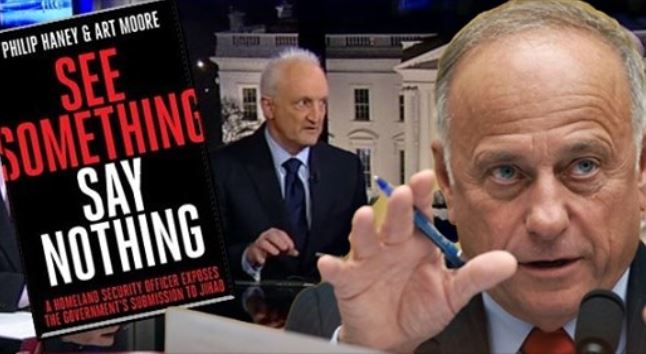 Opinion| Congressman Steve King, Republican from Iowa, made a game changing statement about the alleged ‘suicide’ of an Obama admin whistleblower that has the official narrative turned on it’s ear. Before we get to what he said, here is a little context.

The DS has really created a mess in this country, and because of their actions, we have a crisis of credibility for our government institutions, especially Federal Law Enforcement and the Intelligence Community.

To be clear, the issue is not with the hard working men and women in the FBI or the DOJ, I believe most people seek out those positions to uphold the Constitution and protect the innocent. My beef is with the leadership who abuse their power, ever seeking to expand it, using it to shelter themselves and their pals from being exposed for their corruption and abuse.

As for the ‘Intelligence Community’, it may as well be called the ‘Deception Community.’ If there was anyone who trusted the CIA or NSA in the past, I have a feeling they now realize that the agencies have become above the law, shadow governments who seek to not only steer the elections of other nations, but those here at home as well.

Because of all the abuses against our Constitution and elections, the constant flow of BS coming out of Langley, the IC, and the media who carries their water for them, our institutions have no credibility left.

Take the allegations that Russia is trying to help Bernie in 2020. Is it not curious that everyone who the DS sees as a threat to their hegemonic control just to happens to be smeared as being Putin’s bitch? Now, do not get me wrong, I think Bernie is a disaster waiting to happen and that Putin would love to have such a weak communist in charge of our executive branch, but I can no longer trust a thing that comes out of the IC or DOJ.

This lack of trust has spilled over to local law enforcement when they are investigating big cases as well. I would bet my bottom dollar that some current, or former, federal agents are working with the local police in the ‘investigation’ into the death of Phil Haney.

For those of you who missed the original story, Mr. Haney was a big time whistleblower in the Obama administration. He is an investigator and has since written books about the corruption and crimes he witnessed inside the Obama admin’s DHS.

‘Mr. Haney had told Fox News’ Sean Hannity, back in 2016, that he was ordered by the Obama administration to scrub the record of Muslims in the US with terrorist ties.

Philip Haney had claimed that during the Obama years, political correctness had forced the killing of the investigation. People have since asked if the scrubbing had not occurred, if we would have been able to stop the San Bernardino Christmas terrorists.’

Haney was said to be working on some bombshell investigations regarding Keith Ellison, the Democrat, of Muslim faith, who is trying to keep his job as Minnesota’s Attorney General.

According to the Amador County Sheriff-Coroner’s Office released soon after Haney’s death made national news, Haney was discovered Friday morning, with a gunshot wound. His body was discovered by his car on a highway in Plymouth, California. Reports suggest that a firearm was found next to Haney.

‘On February 21, 2020 at approximately 1012 hours, deputies and detectives responded to the area of Highway 124 and Highway 16 in Plymouth to the report of a male subject on the ground with a gunshot wound. Upon their arrival, they located and identified 66 year old Philip Haney, who was deceased and appeared to have suffered a single, self-inflicted gunshot wound. A firearm was located next to Haney and his vehicle. This investigation is active and ongoing. No further details will be released at this time.’

Now, anytime a whistleblower dies from ‘suicide’ there ought to be a thorough investigation into what happened before we announce the cause of death … don’t you think?

Me, being the skeptic that I am, and judging by what some people who allegedly were close to Haney said, I have a feeling there is more to this story than Haney was sad and shot himself to death on a highway, but call me crazy.

In a since deleted Tweet, Jan Markell, who the Gateway Pundit describes as an activist, speaker and friend of Haney stated:

‘”My friend Phil Haney was found shot yesterday in CA. I had lunch with him a month ago. He warned something could happen to him. He was to get married in a month. It will be falsely called a suicide.’

“I am devastated to hear my dear friend Phil Haney has passed. I was texting with him on Wednesday and he had just returned from his sisters and was praising God for a breakthrough! I had prayed with him on Tuesday.”

“Phil Haney was a friend & patriot. He was a target because of all he knew of Islamic terrorist coverups. He insured his life by archiving data that incriminated the highest levels of the Obama administration. Phil Haney didn’t kill himself. RIP, Phil.”

Phil Haney was a friend & patriot. He was a target because of all he knew of Islamic terrorist coverups. He insured his life by archiving data that incriminated the highest levels of the Obama administration. Phil Haney didn’t kill himself. RIP, Phil. https://t.co/pvy7MflFwc

Now, we do not know for sure what happened to Haney, and the official story is that he, like Jeffery Epstein, ‘killed himself.’ I hope that we will see a thorough investigation and that the truth, no matter what it is, will come to light, but I’m not holding my breath.

I can tell you one thing though, if Haney’s files never see the light of day, there is no way you will convince me that this was a suicide, but hey, that’s just like, my opinion, man.