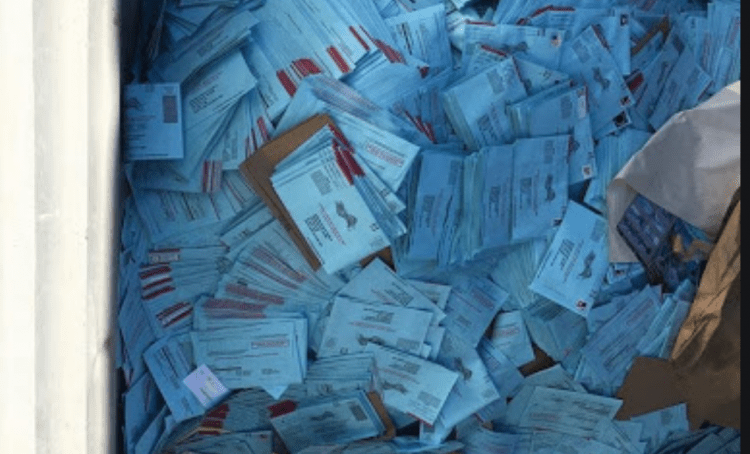 Lyin’ Biden insisted that there was no evidence of any problems or security concerns with mail-in voting. The lies now are so vast and wide, that nothing – and I mean nothing – coming from the Democrats is true or accurate. The debate was proof of that.

The U.S. Postal Service has reportedly launched an investigation after mail — including absentee ballots — were discovered this week along a road in the swing state of Wisconsin.

“According to the Outagamie County Sheriff’s Office, three trays of mail were discovered shortly before 8 a.m. Monday in a ditch along State 96 at Outagamie county CB in Greenville,” the Post-Crescent reported. “The mail was on its way to the post office and the sheriff’s office turned it over to the postal inspector. The mail was mixed and did contain ‘several’ absentee ballots.”

The report said that the U.S. Postal Service would not disclose the specific location where the absentee ballots were discovered or how many were found.

“We are aware of some mail including absentee ballots recovered in Greenville, Outagamie County earlier this week,” a spokesperson said. “The U.S. Postal Service is investigating this matter, and we are unable to comment further at this time.”

The news comes after federal law enforcement officials discovered that some military ballots had been discarded in the swing state of Pennsylvania and that out of all the discarded ballots that had been opened, they all had voted for President Donald Trump.

“The FBI has recovered a number of documents relating to military ballots that had been improperly opened by your elections staff, and had the ballots removed and discarded, or removed and placed separately from the envelope containing confidential voter information and attestation,” U.S. Attorney David J. Freed said in a letter to Shelby Watchilla, Director of Elections of Luzerne County Bureau of Elections.

“Specifically, a total of nine (9) military ballots were discovered to have been discarded,” the letter continued. “Seven (7) of those ballots when discovered by investigators were outside of any envelope. Those ballots were all cast for presidential candidate Donald Trump. One (1) of those seven (7) ballots was able to be identified to an envelope that was recovered, and thereby potentially tied to a specific voter. Two (2) military ballots that had been discarded were previously recovered by elections staff, reinserted into what appeared to be their appropriate envelopes, and then resealed. Therefore, the votes cast on those two (2) ballots are unknown. Thus, is appears that three (3) of the nine (9) recovered ballots can be potentially attributed to specific voters. Six (6) of the ballots were simply removed and discarded, and cannot be attributed to a specific voter at this time.”

“It is an unfortunate reality that elections can be stolen outright by mail ballot fraud. Election fraud, particularly an organized mail ballot fraud scheme orchestrated by political operatives, is an affront to democracy and results in voter disenfranchisement and corruption at the highest level,” Attorney General Paxton said in a statement. “Mail ballots are vulnerable to diversion, coercion, and influence by organized vote harvesting schemes. This case demonstrates my commitment to ensuring Texas has the most secure elections in the country, and I thank the Gregg County Sheriff and District Attorney for their continued partnership. Those who try to manipulate the outcome of elections in Texas must be held accountable.”