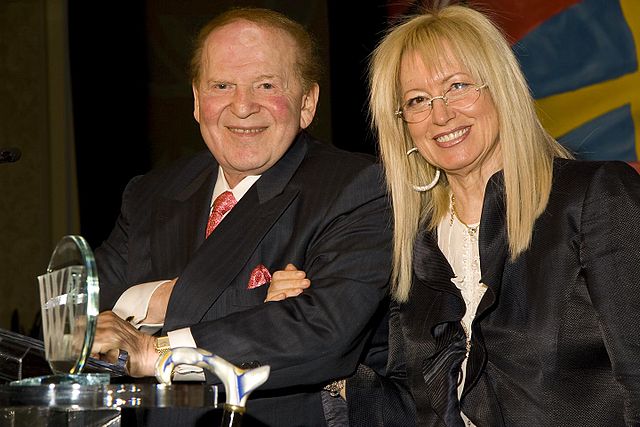 If you’re wondering why so many Republicans are so hawkish on Iran, this might be a clue.

From LobeLog, “Trump Has A $259 Million Reason To Bomb Iran”:

On Thursday, the United States came perilously close to a military confrontation with Iran after it downed a U.S. drone that may or may not have entered the country’s air space. President Donald Trump reportedly ordered a retaliatory military strike on Iran but called it off, according to Trump’s own tweets on Friday morning, because a general told him that “150 people” might die in the strike.

Much analysis of Trump’s slide toward war with Iran has focused on his hawkish national security adviser, John Bolton, who, reportedly requested options from the Pentagon to deploy as many as 120,000 troops to the Middle East and hit Iran with 500 missiles per day. Bolton is the loudest voice inside the White House pushing for a military escalation to the administration’s “maximum pressure” strategy.

[…] Yet, there’s another omnipresent influence on Trump: $259 million given by some of the GOP’s top supporters to boost his campaign in 2016 and support Republican congressional and senate campaigns in 2016 and 2018.

Those funds came from Sheldon and Miriam Adelson, Paul Singer and Bernard Marcus, donors who have made no secret, both through public statements and funding think tanks that support military action against Iran, of their desire for the United States to destroy the Islamic Republic.

Adelson, who alongside his wife Miriam are the biggest donors to Trump and the GOP, contributed $205 million to Republicans in the past two political cycles and reportedly sent $35 million to the Future 45 Super PAC that supported Trump’s presidential bid. His role as the biggest funder of Republican House and Senate campaigns makes him a vital ally for Trump–who relied on Adelson’s campaign donations to maintain a Republican majority in the Senate and curb Republican losses in the House in the 2018 midterm election–and any Republican seeking national office.

Adelson publicly suggested using nuclear weapons against Iran and pushed for Trump to replace then-national security adviser H.R. McMaster with Bolton, partly due to the former’s perceived unwillingness to take a harder line on Iran. In 2017, the Zionist Organization of America, which receives much of its funding from the Adelsons, led a public campaign against McMaster, accusing him of being “opposed to President Trump’s basic policy positions on Israel, Iran, and Islamist terror.”

[…] Employees of Singer’s firm, Elliott Management, were the second largest source of funds for the 2014 candidacy of the Senate’s most outspoken Iran hawk, Sen. Tom Cotton (R-AR), who urged Trump to conduct a “retaliatory strike” against Iran for purportedly attacking two commercial tankers last week.

[…] These donors have made their policy preferences on Iran plainly known. They surely expect a return on their investment in Trump’s GOP.