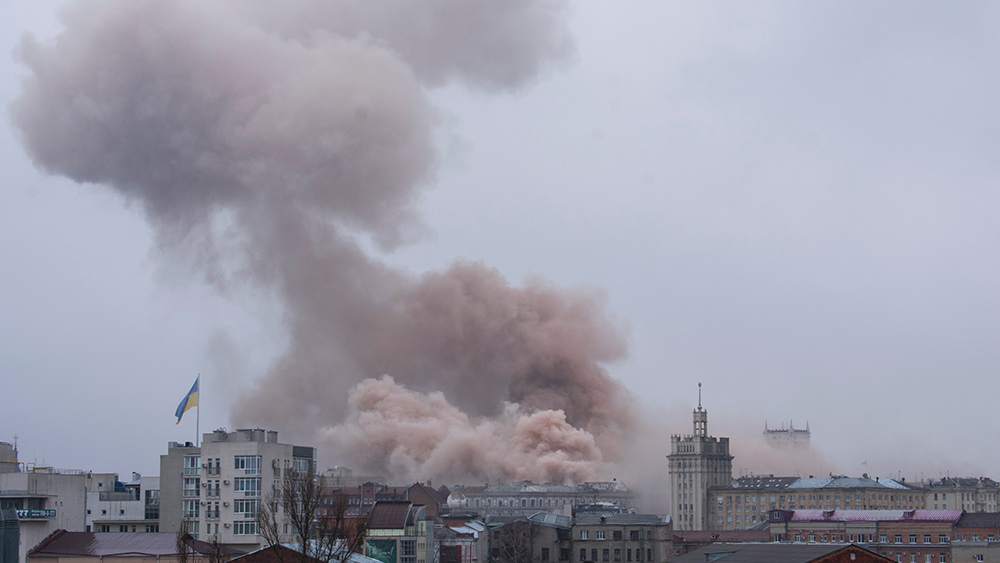 (Natural News) A report published last month claimed that there were dozens of NATO military trainers trapped in the Ukrainian city of Mariupol after it was encircled by invading Russian forces.

The report, posted to the website The Saker, said that the information was based on confirmation by the Russian government and military officials:

Firstly Russian State Duma member Adam Delimkhanov in an interview with RT has openly stated he estimates around 100 such foreigners there, and that they are in communication with them and the rumors are true that they are trying to negotiate a release and escape corridor. It seems to imply all those Macron rumors were accurate.

The report then linked to a report posted at the video-sharing site Bitchute, which said that trainers from Britain, France, and even “neutral Sweden” were trapped in the city.

A Sputnik News report also noted that according to Russian communication intercepts, there were a significant number of foreign mercenaries also stuck inside the city:

The joint Russian military-Donetsk People’s Militia operation to free the Azov Sea-adjacent city of Mariupol has turned into one of the toughest slogs of the campaign in Ukraine, with Ukrainian military and neo-Nazi Azov units setting up defenses inside the city, taking civilians hostage, and turning the battle into a brutal house-by-house fight.

Significant numbers of foreign mercenaries are active in those areas of Mariupol which remain under Ukrainian control, Russian Ministry of Defence spokesman Igor Konashenkov has reported.

“The joint operation of the troops of the Donetsk People’s Republic and units of the Russian armed forces to liberate the city of Mariupol continues. The results of an analysis of radio intercepts show that in addition to neo-Nazi elements from the Azov regiment and the remnants of the Ukrainian armed forces, a significant number of foreign mercenaries are located in the occupied areas of the city,” Konashenkov said in a press briefing late last week.

“In addition to Ukrainian and Russian, radio communications are being carried out in six other mainly European foreign languages,” he added.

Another report by Sputnik noted that a Ukrainian vessel attempted to break through Russia’s naval blockade of Mariupol and rescue the trapped mercenaries, but to no avail.

“On the evening of 8 April, the regime in Kiev made a new unsuccessful attempt to evacuate the neo-Nazi fighters’ leaders [trapped in Mariupol] by sea. In the evening darkness the Ukrainian dry cargo vessel Apache, assigned to the Maltese port of Valletta and flying the Maltese flag, followed a caravan of ships from Taganrog Bay to the Kerch Strait,” Konashenkov added at a separate press briefing.

“At 10:38 pm, 30 km southeast of Mariupol, the vessel abruptly changed course and attempted to break through to the Mariupol port, blocked from the sea by forces of the [Russian] Black Sea Fleet,” Konashenkov said.

The Apache ignored commands from Russian patrol ships to respond via an international communications channel. Also, the vessel ignored warning shots from Russian warships attempting to get the vessel to change course.

Rather, someone from the vessel radioed instead, “This is ‘Maniac,’ I am coming for you,” while signal fires were observed from areas along the shore controlled by Ukrainian forces.

Russian naval fire struck the Apache, the report said, causing a fire but it was controlled and extinguished by the vessel’s crew and there were no reported injuries. Russian forces boarded the vessel and inspected it before taking it to the port of Yeysk in Russia’s Krasnodar region.

A day earlier, a pair of Ukrainian Mi-8 transport helicopters were shot down by Russian troops using man-portable missiles as they, too, attempted a rescue.

NATO is doing all it can to get involved in this war, and that’s going to be a huge mistake.