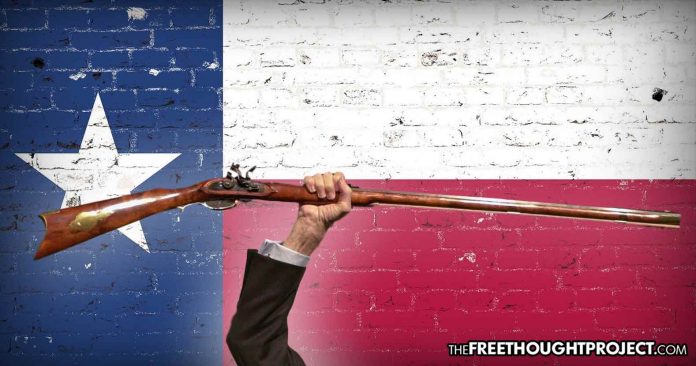 AUSTIN, Texas (TAC) – A bill filed in the Texas Senate would set the foundation to nullify federal gun control in practice and effect.

Sen. Bob Hall (R-Edgewood) filed Senate Bill 378 (SB378) on January 17. The bill would prohibit any state government agency, personnel or public funds from enforcing any federal gun control regulation or law “if the federal statute, order, rule, or regulation or international law imposes a prohibition, restriction, or other regulation, such as a capacity, size, or configuration limitation, that does not exist under the laws of this state.”

State agencies and local governments would not be allowed to receive state grant money if they adopt any regulation that requires enforcement of federal gun control laws that do not mirror in state law. A person in the affected jurisdiction would be permitted to file a lawsuit with the state attorney general.

There is also a provision that stipulates the attorney general must defend any state agency or local government sued by the feds for not enforcing federal gun laws.

The federal government relies heavily on state cooperation to implement and enforce almost all of its laws, regulations and acts – including gun control. By simply withdrawing this necessary cooperation, states can nullify in effect many federal actions. As noted by the National Governor’s Association during the partial government shutdown of 2013, “states are partners with the federal government on most federal programs.”

Based on James Madison’s advice for states and individuals in Federalist #46, a “refusal to cooperate with officers of the Union” represents an extremely effective method to bring down federal gun control measures because most enforcement actions rely on help, support and leadership from the states.

“Partnerships don’t work too well when half the team quits,” said Michael Boldin of the Tenth Amendment Center. “By withdrawing all resources and participation in federal gun control schemes, the states can effectively bring them down.”

Boldin also noted how the same strategy is being used effectively elsewhere.

“No one – and I mean no one – is arguing that immigration sanctuary cities aren’t having an effect on federal immigration law. This bill in Texas uses the same approach of withdrawing resources and enforcement support, but it takes on federal gun control,” he said. “More conservative states should do the exact same thing.”

SB378 represents a strategic, yet powerful step forward. If it passes into law, gun rights activists should then direct their strategy and resources towards repealing state restrictions on the right to keep and bear arms. Every repeal would then include an immediate ban on resources for enforcement of any similar federal law or regulation.

Some gun rights supporters argue that such a measure is “unnecessary” because it addresses a nonexistent problem with a Republican Senate and an NRA-backed president.

“We held in New York that Congress cannot compel the States to enact or enforce a federal regulatory program. Today we hold that Congress cannot circumvent that prohibition by conscripting the States’ officers directly. The Federal Government may neither issue directives requiring the States to address particular problems, nor command the States’ officers, or those of their political subdivisions, to administer or enforce a federal regulatory program. It matters not whether policymaking is involved, and no case by case weighing of the burdens or benefits is necessary; such commands are fundamentally incompatible with our constitutional system of dual sovereignty.”

SB378 has been assigned to the Senate State Affairs Committee, where it will need to pass by a majority vote before moving forward in the legislative process.

TJ Martinell is an author, writer, and award-winning reporter from Washington state. His dystopian novel The Stringers depicting a neo-Prohibition Era in the city of Seattle is available on Amazon.

Visit his personal site at www.tjmartinell.com. Join his Facebook page here. Listen to his weekly podcast on Sound Cloud.

Decision Day for Dean: “After a year in limbo, I have been approved for disability. Here’s what comes next.”
July 7th, 2022 DC Clothesline