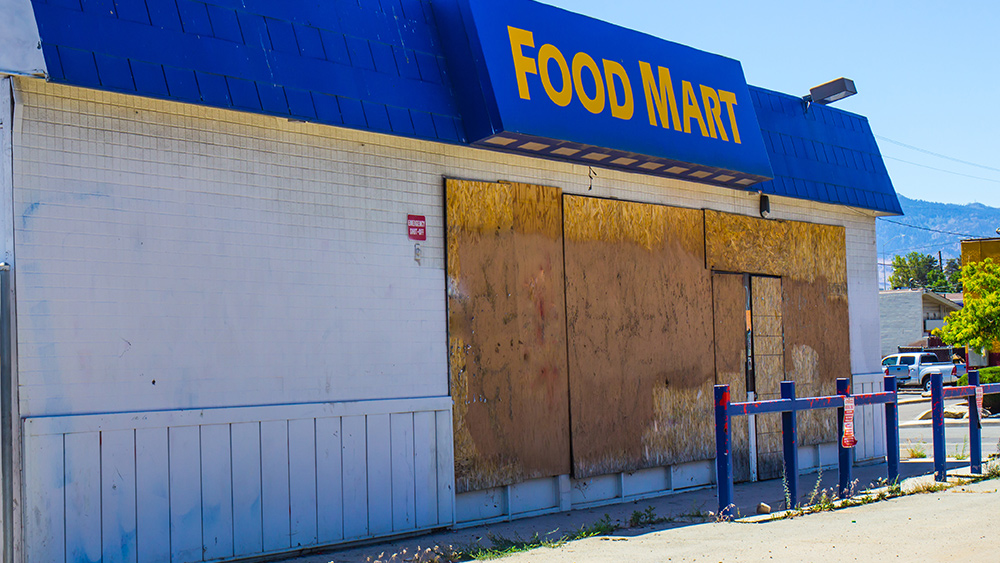 (Natural News) As cities all over America have placed stay-at-home orders in response to the coronavirus, high-end retailers are worrying about potential civil unrest. Several shops, including those in one of Hollywood’s most famous shopping districts, are taking measures to protect themselves against possible looters.

Shops on or around Beverly Hills’ Rodeo Drive seem to be preparing for the worse possible scenario during this current outbreak. Photographs have surfaced online of several of these stores having their doors and storefront windows boarded up with giant slabs of plywood. This is in addition to said stores clearing out their shelves of expensive merchandise.

When interviewed by TMZ, construction workers boarding up the Pottery Barn off Beverly Drive and Dayton Way, right near Rodeo, stated that what they were doing was only a temporary measure to protect that specific branch from bad actors. However, other photographs have now come in showing other stores in other major cities also doing the same.

The defensive measures by retailers come after police departments have been hit hard by the ongoing pandemic. In some cities, hundreds of police officers have tested positive for the disease, while thousands have called in sick or are in isolation.

High-end stores anticipating looting and civic unrest all over

Rodeo Drive isn’t the only high-end shopping district that’s seeing it stores board up due to fears of possible looting and civil unrest. Numerous photographs have popped up over Twitter, showing shopping districts in cities around the country such as Chicago, San Francisco and more boarding up their windows.

Closures of high-end retailers such as Dolce & Gabbana and Hermes at Chicago’s Magnificent Mile have prompted Luigi Zingales, professor of finance at the University of Chicago’s Booth School of Business, to compare the situation to the 2019-20 Chilean protests where rioters looted shops and even churches in the capital of Santiago and other cities.

The “Magnificent Mile” in Chicago today. It looks like Chile in November. All fancy stores boarded up. Are they afraid of #Covid19 or of something else? @DMatamala pic.twitter.com/Ag2SU2iJ2a

Meanwhile, stores boarding up in San Francisco have caused others to compare the situation to hurricane preparations — something that normally doesn’t have to be done in California, which rarely, if ever, experiences direct landfall from storms.

San Francisco looks like a town expecting a Hurricane, with storefronts boarded up, and people lining up at stores, while others wander around without any apparent destination or plan, as if propelled by Brownian motion.

Everyone is waiting for Hurricane Covid-19 to crest. pic.twitter.com/XseFzhSuts

Other cities where shops have been photographed boarding up include Kansas City and New York City. The latter is currently facing shortages of police officers due to the coronavirus.

Couple of @ThePlazaKC stores now boarded up during the shelter in place order pic.twitter.com/qq77n7JE9Q

A shortage of police officers is a worry in the U.S.

While open civic unrest and rioting have yet to happen in the U.S., retailers aren’t taking any chances. One of the reasons for this is that police departments themselves are being walloped by the coronavirus.

A survey of over 40 law enforcement agencies done by the Associated Press shows that over 690 officers nationwide have been quarantined because of the virus. The New York City Police Department (NYPD) has been the hardest hit of all the departments surveyed. When the survey was conducted, 512 NYPD police officers had tested as positive for the virus. City officials, however, now expect the number to have ballooned to over 900 NYPD officers by March 30. (Related: Police officers are starting to die from coronavirus in US cities… what will happen if law enforcement can’t function?)

One of the officers who tested positive has since died over the weekend, bringing the total of NYPD officers who’ve succumbed to it to three. Meanwhile, an even larger number of officers are in out sick or in isolation, with NYPD Police Commissioner Dermot Shea confirming that 5,000 officers were out sick as of Sunday.

With police being hit as hard as they are, it’s no wonder that business owners are looking to other means to protect their stores. Should any mass riots occur, police departments may be too depleted to handle them. As such, more businesses are likely to follow suit and board up their storefronts to protect themselves.