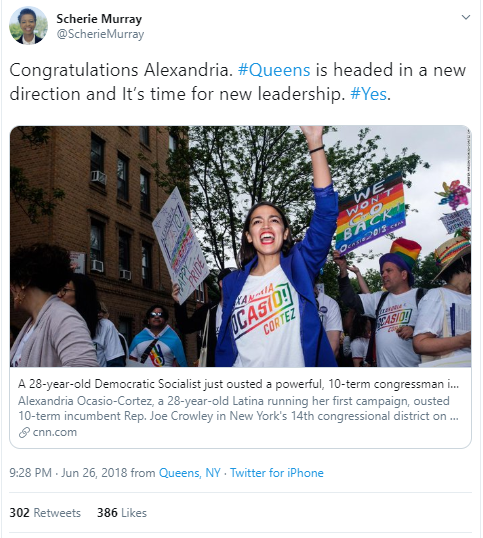 If I lived in AOC’s district and I had to vote for AOC or Murray TODAY, you could bet your bottom dollar I would vote for Murray.

However, this woman may not be what she seems.

I took a screenshot (above) in case she deletes it. Here is the original:

It seems that Murray is actually a “former” Democrat who is now claiming to be a Republican.

People can and do change, so let’s not say it is impossible.

But we need to question Murray for who she may really be and she might actually be a RINO (Republican in Name Only).

Scherie Murray, a Jamaican-born woman who grew up in Queens and founded a TV production and advertising company, told The Post she voted for Obama, a Democrat, in both the 2008 and 2012 elections. She said it was because “as a young African American woman” she “was inspired by the first African American president’s message of change.”

“Congratulations Alexandria,” she then tweeted. “#Queens is headed in a new direction and It’s time for new leadership. #Yes.”

Now, a little over a year later, she’s vying for Ocasio-Cortez’s seat representing the state’s 14th District that encompasses parts of Queens and the Bronx. While kicking off her campaign on Wednesday, Murray even released a scathing video accusing the left-wing media darling of “self-promotion over service.”

Some Republican pols say Murray would be a poor choice considering she’s a former Democrat who currently lives outside the district in Laurelton, Queens, switched parties a decade ago and has a history of backing Democrats.

Again, if I were voting in this district and it was down to AOC v Murray, I would not hesitate to vote for Murray.

People do change and evolve.

However, someone who sent a congratulatory message to AOC just over a year ago, and voted for Obama twice doesn’t seem like a real “Republican” to me.

She seems like a moderate at best and a RINO at worst.

Her agenda seems like it may be racial/identity politics which is not part of the Republican agenda.

People are people and Republicans don’t care what color you are.

True Conservatives will be slow and full of apprehension toward Murray, as they should be.

Still, many would vote for anyone over AOC, Republican or not.

However, Scherie Murray may not be as much cause for excitement as we previously thought.

Let’s hope she is evolving quickly.

The people in AOC’s district would likely vote for anything with a pulse right now to get rid of the shame that she brings upon their district.

Then again, if Democrats ever truly used logic in voting we wouldn’t be in this mess in the first place.