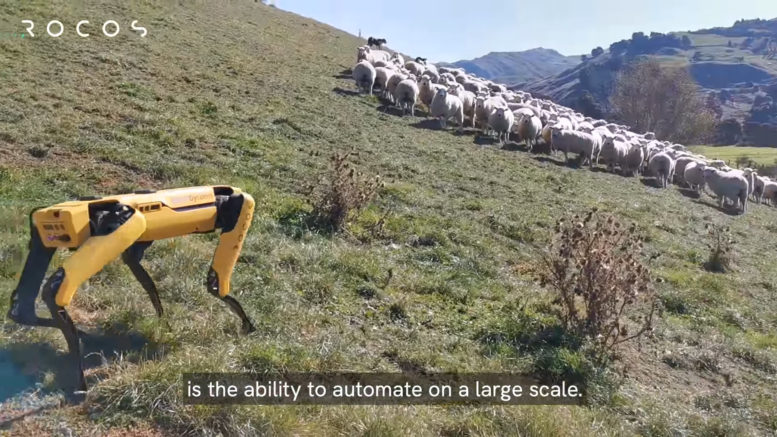 For years now Activist Post has been warning about the rise of robotic technology and artificial intelligence. Now, the technology is being used for police robot dogs and for herding sheep. That means that robots are even coming for our K9 friends’ jobs. Aye caramba!

Humans and dogs aren’t the only ones who can master the art of herding livestock. Boston Dynamics’ four-legged robot dog Spot seems to be doing a fine job of maneuvering sheep across the pasture.

In a new video posted by robotics software company Rocos on Tuesday, Spot is seen roaming the New Zealand grasslands, showing off its shepherding skills with a group of sheep.

Large creepy robot dogs aren’t just being used for corralling a herd of sheep. They are also being used to enforce social distancing amid this CV pandemic. Activist Post previously highlighted this scary new robotic dog being used by police in Singapore.

Video of Boston Dynamics robots climbing stairs, carrying boxes, and doing basic parkour have long circulated around the internet, creeping out viewers. In fact, Activist Post has covered each and every one of these videos but we never thought that the creepy robotic dog at Boston Dynamics would be anything more than just an experiment; we were totally wrong.

It turns out that the Massachusetts State Police and Singaporean authorities are both using “Spot,” and the trend will only spread like what has happened with pandemic drones. As Activist Post previously wrote, CV will be a gateway for all types of Orwellian technology and will speed up the deployment of robots.

While record unemployment is hitting here in the U.S., automated machines are being rolled out as well to replace even more human workers. Now we can add our K9 friends to the mix.

Another job being threatened by robots is meat packaging. Additionally, grocers themselves are also in danger of being replaced by machines. CNN reports that grocers – big and small chains alike – are turning to robots for performing various tasks like cleaning floors, stocking shelves and delivering groceries to shoppers. The covid crisis could even prompt online retail warehouses like Amazon to invest more into automation technology as well.

The New York Times reported that the outbreak is boosting demand for Zhen Robotics and its RoboPony, a self-driving cart that is sold to retailers, hospitals, malls and apartment complexes.

A group of scientists on the editorial board of Science Robotics is further calling for robots to do the “dull, dirty, and dangerous jobs” of infectious disease management by replacing certain hospital jobs like disinfecting robots combing rooms/floors and working in labs.

A recent report by A3, Association For Advancing Automation, further details all the ways that artificial intelligence and automation is being used in different industries to combat the coronavirus.

This all continues to highlight what Activist Post and this writer has detailed consistently for months — that advancement in robotics and A.I. is taking jobs daily more and more, warning that robots would soon take human jobs such as construction and farming robots, Angus and HRP-5P, being created to replace workers in the aforementioned industries. Activist Post has been sounding the alarm of the coming robot apocalypse.

As this writer has written previously on Steemit, we are shifting towards a working world with little or no humans, as automation and artificial intelligence begins to take over our jobs. It’s cheaper to hire a few robots which don’t need rest and benefits than to hire a few humans who need healthcare and retirement funds. I guess we can also add dogs since their jobs are now being threatened as well.

Last year, robots took a record number of human jobs in the U.S. according to Robotic Industries Association (RIA) as Activist Post reported. Now, with the impetus of the coronavirus the number of jobs occupied by robots could multiply quite rapidly. Oxford Economics also published its own report warning that accelerating technological advances in automation, engineering, energy storage, artificial intelligence, and machine learning have the potential to reshape the world in 2020 through 2030s, displacing at least 20 million workers.

With the coronavirus as a catalyst to speed up the deployment of automated machines, we can probably safely say that number will be much more severe. It seems I am not the only one to share that opinion; a recent MarketWatch article written by Johannes Moenius, a professor of global business and the director of the Institute for Spatial Economic Analysis at the University of Redlands, agrees with this author’s conclusion stating “at least 50 million jobs could be automated in just essential industries.”

In fact, the Brookings Institution said in a report last month that “any coronavirus-related recession is likely to bring about a spike in labor-replacing automation … Automation happens in bursts, concentrated especially in bad times such as in the wake of economic shocks, when humans become relatively more expensive as firms’ revenues rapidly decline.”