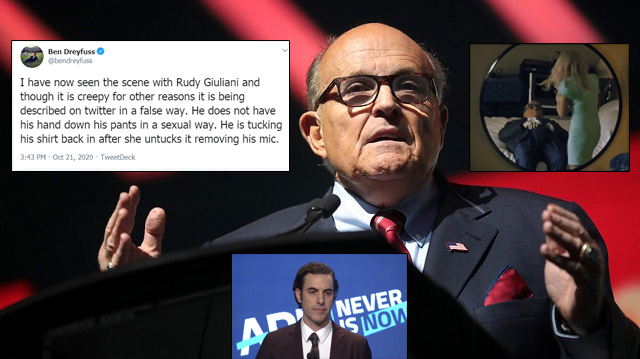 This smear is obviously being amplified by the media and Big Tech to get back at him for his role in releasing the compromising content on Hunter Biden’s laptop.

“After she removes his microphone, Giuliani, 76, can be seen lying back on the bed, fiddling with his untucked shirt and reaching into his trousers. They are then interrupted by Borat who runs in and says: ‘She’s 15. She’s too old for you.’” https://t.co/uxHj96Xd3y

Here’s how the hoax story was first reported in The Guardian:

In the film, released on Friday, the former New York mayor and current personal attorney to Donald Trump is seen reaching into his trousers and apparently touching his genitals while reclining on a bed in the presence of the actor playing Borat’s daughter, who is posing as a TV journalist.

Following an obsequious interview for a fake conservative news programme, the pair retreat at her suggestion for a drink to the bedroom of a hotel suite, which is rigged with concealed cameras.

After she removes his microphone, Giuliani, 76, can be seen lying back on the bed, fiddling with his untucked shirt and reaching into his trousers. They are then interrupted by Borat who runs in and says: “She’s 15. She’s too old for you.”

Ben Dreyfuss, the editorial director for the far-left website Mother Jones, threw cold water on the hoax after the phony story was allowed to spread to millions.

“I have now seen the scene with Rudy Giuliani and though it is creepy for other reasons it is being described on twitter in a false way,” Dreyfuss said. “He does not have his hand down his pants in a sexual way. He is tucking his shirt back in after she untucks it removing his mic.”

Only a few stills have been released.

The first still allegedly shows her taking off his mic. The second appears to show him tucking in his shirt (Update: this is now confirmed as noted above). Giuliani notified security to call the police on Cohen immediately after this interview took place, his spokeswoman Christianne Allen said back in July. Giuliani was single at the time this occurred and the “15-year-old” looked like she’s 30. Twitter instead chose to amplify the story by pushing it to the top of their fake “What’s happening” tab, which is all Twitter-curated content they replaced their “Trending” tab with several months ago in the interest of social engineering. "Sharing explicit sexual images or videos of someone online without their consent is a severe violation of their privacy and the Twitter Rules."

Will @TwitterSupport enforce their own rules? @robbystarbuck https://t.co/U7RnkniNu6

Cohen in the past staged another fake impropriety hoax to try and hurt the great Dr. Ron Paul.

Cohen is an establishment shill who has been lobbying Facebook and Big Tech to censor the internet on behalf of Jonathan Greenblatt’s Anti-Defamation League.

Last year, Cohen demanded Facebook give the ADL’s “moderators” veto power on every single post users make on the site, censor Holocaust denial and any content which spreads “the lie that Jews are somehow dangerous.”

Zuckerberg dutifully complied with most of Cohen’s demands this year by banning all content which depicts “Jewish people running the world or controlling major institutions such as media networks, the economy or the government” as well as all Holocaust denial and Q-Anon conspiracy theory accounts.

The only thing funny about Cohen these days is what a pathetic loser he has become.

(1) The Borat video is a complete fabrication. I was tucking in my shirt after taking off the recording equipment.

At no time before, during, or after the interview was I ever inappropriate. If Sacha Baron Cohen implies otherwise he is a stone-cold liar.

(3) This is an effort to blunt my relentless exposure of the criminality and depravity of Joe Biden and his entire family.

Deadline Hollywood reports CAA had a distribution screening in September where there was no mention of the scene holding any importance.

(4) We are preparing much bigger dumps off of the hard drive from hell, of which Joe Biden will be unable to defend or hide from. I have the receipts.

[This post was updated with comments from Ben Dreyfuss definitely throwing cold water on the hoax as well as Rudy Giuliani’s response.]