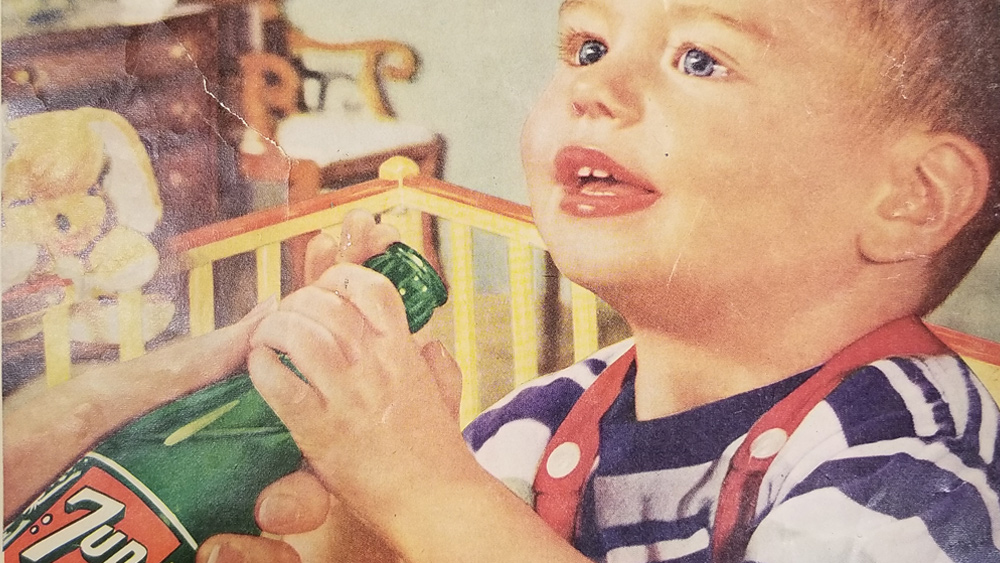 As part of an investigation into the deceptive, harmful marketing practices of soda companies, Natural News acquired a 1968 LIFE Magazine issue. Inside, a full page ad urged mothers to feed their infants 7-Up as a way to “fresh up!” (See below.)

The ad features promotional text claiming 7-Up was the “All-Family Drink” that could even be given to toddlers.

Really got a grip on that 7-Up, haven’t you, big boy? Go right ahead, “fresh up” to your heart’s content! Mom knows sparkling, crystal-clear 7-Up is so pure, so good, so wholesome that folks of all ages — even little guys like you — can enjoy it often!

This is how soda companies were brainwashing mothers in the 1960s to exploit their children to feed the corporate profit machine. The ad features a young toddler with a baby crib and children’s toys in the background, implying that 7-Up should be served to infants who are still in the crib.

Here’s the full page ad, below. Click here for the hi-res file.

Today, these same soda companies are pushing transgender mutilations of children as part of some new, twisted “inclusiveness” agenda that actually consists of mentally ill transgender mobs threatening anyone who disagrees with their pedophilia and child mutilations.

Last year, Sprite released an LGBT / transgenderism ad in Argentina that celebrated mothers binding the breasts of children, a painful form of child mutilation that’s essentially an act of sexual violence against children. As described in a Breitbart article we republished:

The video captures somewhat playful glances between the mothers and their gender dysphoric children.

The mothers of boys are seen in the ad applying makeup and dressing their sons in feminine attire as they smile at each other. The mothers of girls are viewed binding the breasts of their daughters to help them appear as males. A grandmother teasingly helps her grandson dress in drag.

Johnston also notes the video’s background song – “You’ll Never Walk Alone” from the musical Carousel – is used to “tug on heartstrings” and emphasize the narrative that transgender children are victims.

The video depicts children preparing a rainbow flag for the Pride event as they embrace LGBT family members. Parents appear to send their LGBT children off to the event in a celebratory manner.

Here are some of the sickening scenes from the ad, which is another twisted example of “progressive” virtue signaling from a corporation — Coca-Cola — that now espouses abusing the human rights of children in the quest to push transgenderism indoctrination:

So it only took five decades for the evil soda corporations to go from abusing babies with liquid sugars to promoting the abuse of children through transgenderism and gender dysphoria.

Of course, this ongoing abuse of children is always framed as some form of “love.” In the 1960s, loving your children meant feeding babies sugared-up soft drinks while they were still crawling around in their cribs. In 2020, “love” is now painted as celebrating your child having his penis cut off while he’s chemically castrated with puberty blockers and turned into maimed, scarred shadow of a girl. Somehow, no matter how evil, distorted and malicious the progressive agenda becomes, it’s always packaged as a new form of “love.”

What’s next, will Coca-Cola promote pedophilia and child trafficking as a form of new love, too? “Drink a Coke, molest a child. LOVE WINS.”

In related news, by the way, Twitter is now openly advocating the speech of those who support child rape and child abuse. Under the tyranny of Jack Dorsey, Twitter’s corrupt, criminal-minded CEO, Twitter now essentially endorses child rape but bans anyone who supports America. Ponder that twisted reality for a moment…

The Coca-Cola corporation seems to celebrate genital mutilation of children

What’s missing in this corporate-sponsored trip to the far side of insanity? Well, for starters, common sense. After all, is it really wise to award hero status upon pubescent teens over their sexual orientation, which is oftentimes confused at best? Teenagers are already greatly influenced by the myriad messages they are bombarded with daily over social media. Do they really need a Fortune 500 company promoting a lifestyle, namely transgender, which carries with it an entire rainbow of untold risks? The liberal media rarely reports it, but there are thousands of youth right now attempting to reverse the bodily harm they have done to themselves by trying to physically become the opposite sex, which is – it needs to be clarified once and for all – absolutely impossible.

Oddly, Western society has long condemned the practice of genital mutilation in other ‘less civilized’ cultures, yet now somehow believes it is acceptable for children to sacrifice body parts and ingest powerful hormones in some dangerous quest to eradicate the sex they were born with. In other words, biology and the doctors, who assigned them the ‘wrong sex’ at birth, got it all wrong. What really matters today, at least for the Cultural Marxist warrior class, is how each individual ‘identifies’ with their ‘true’ gender.

In truth, the soda giants have always been at war with children. It was always about exploitation for profit. Now it’s about virtue signaling for profit, even if that signaling requires celebrating the genital mutilation and extreme psychological abuse of children and teens — this is what the transgenderism movement inflicts upon our youth. This is the danger the Left cult now poses to humanity.