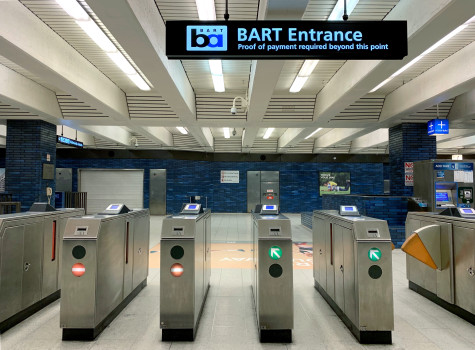 A glimpse of what’s coming in 2020? Hint: the state-mandated concept of black privilege trumping the enforcement of the law. [Nearly half of BART fare citations go to black riders, but police say system prevents profiling, San Francisco Chronicle, December 19, 2019]:

BART’s high-profile quest to cut down on its fare-evasion epidemic has produced dramatic racial disparities, newly released records show, with nearly half of proof-of-payment citations going to African American riders.

Agency officials, however, said the effort to dissuade fare cheats has built-in guards to ensure enforcement is fair and that groups of riders are targeted in a particular place at the same time, without regard to their appearance.Of 12,207 citations doled out from July 18, 2018, to June 30, 2019, roughly 46% were given to people who identified themselves to BART proof-of-payment officers as African American, BART data show.

According to BART surveys, African Americans account for 12% of BART riders, while white people comprise 44%, Asians make up 23% and Latinos account for 18%.A similar racial disparity was seen last year from March to the end of August, when BART staff released a report showing that African Americans accounted for 47% of people cited.The new figures were first revealed by transit activist Chris Arvin.

BART officials in charge of cracking down on fare evasion said the figures were not evidence of bias. All of these encounters, BART said, occurred during sweeps by the agency’s fare inspector team. Civilian officers walk through train cars or stand at an entryway and ask every passenger to show a ticket or Clipper card.Officers ask passengers to identify their race and make a determination based on their observation if passengers refuse.

“My staff, where we can, we spot-check the body-worn camera videos from those operations,” said Russell Bloom, the police auditor. He and other officials monitor the footage to ensure a “systematic approach, that people aren’t skipped, that discretion isn’t applied, and that the enforcement is done as it was presented to the Board of Directors in 2017.

”The racial breakdown laid bare divisions among board directors, who have sparred for months over how BART should deal with gate-hoppers.

“Disparities are unacceptable,” said Lateefah Simon, who was elected president of the board Thursday. “It’s not good enough to just say, ‘Oh, well, black folks are more likely to fare-evade the system.’ I don’t believe that.”Director Robert Raburn, who has been bullish about stopping fare evasion, said the transit agency has tried to stave off bias.

“We thought long and hard about how the citations would be issued,” he said. “We developed a whole procedure, and it’s a thick manual that the fare inspectors go through. The No. 1 takeaway from that big thick manual is that there’s absolutely no discretion. You don’t get to say, ‘Oh, I’m going to let you go this time, ma’am,’ and then cite the next person.

”BART is under intense pressure to stop people from breaching its gates. Not only does lost fare mean less revenue for the agency — officials estimate fare evasion siphons up to $30 million annually — but because riders view the issue as a sign of larger social disorder.

Paying riders cover two-thirds of BART’s operating costs, so officials felt the squeeze when riders began peeling off in the past two years, from a 2016 peak of 128.5 million passengers to 124.2 million in 2017 and 120.6 million last year.

Police view fare-beaters as a catalyst for other types of crime, including cell phone thefts and assaults. The man accused of fatally stabbing 18-year-old Nia Wilson last year had sneaked into the rail system without paying, and the man who allegedly stabbed and killed another passenger last month is believed to have skipped the fare.

“There have been cases where individuals come in and out of our system who haven’t paid, and who have committed a robbery or some type of assault,” said interim Police Chief Ed Alvarez. “That’s no different than somebody who robs a bank and drives off. They’re not going to stop at every stoplight. They’re trying to get away.

”So, BART is scrambling to stanch the problem, using a mix of law enforcement, civilian staff and “station hardening” — tall railings and other barriers that inhibit people from sneaking in. Transit agencies around the country, including in New York and Washington, D.C., are trying similar forms of triage.

But as agency leaders respond, they are acutely aware of criticism over racial inequality in policing the system.Last year, a Chronicle investigation found that two-thirds of people who were banned from BART were African American.

BART is also grappling with disparities in penalties for eating and drinking, the majority of which go to black riders.At some stations, African Americans comprised an overwhelming proportion of people cited for not being able to produce proof of payment, according to the new data.

Read this again: “Disparities are unacceptable,” said Lateefah Simon, who was elected president of the board Thursday. “It’s not good enough to just say, ‘Oh, well, black folks are more likely to fare-evade the system.’ I don’t believe that.”

Memo to Lateefah, the newly elected president of the board (this is not a joke): black people are more likely to be fare-evaders of the BART system. As well as the systems in Washington D.C., Atlanta, New York City, Philadelphia, Portland, Cleveland, Chicago… well, basically any city with public transportation requiring citizens to pay for their rides demonstrates the exact same type of disparities because black people refuse to pay for fare at rates far exceeding their racial counterparts.

Individual blacks collectively commit fare evasions at shockingly high rates noticeable to both law enforcement and the accountants tasked with tracking the financial health of the public transportation system employing them, data which Lateefah Simon is incapable of believing.

It’s time to just dispense with the idea of holding blacks accountable for their actions and pretending they can maintain the standards of civility set by white people who ride BART, the latter overwhelmingly paying for their rides on the system.

The law no longer pertains to Africans in America, for when we dare ask individual blacks to abide by the laws governing polite society, collectively, blacks produce the middle finger to those public institutions tasked with trying to maintain social capital in a diverse community.

How long until we see the mandated decriminalizing of fare evasion across the nation, with melanin-enriched skin an automatic qualifier for a free ride on public transportation, while white transit riders are still mandated to pay the toll/fare?

2020 at the earliest in the BART system, if Queen Lateefah has her way; nationwide, 2022 at the latest.