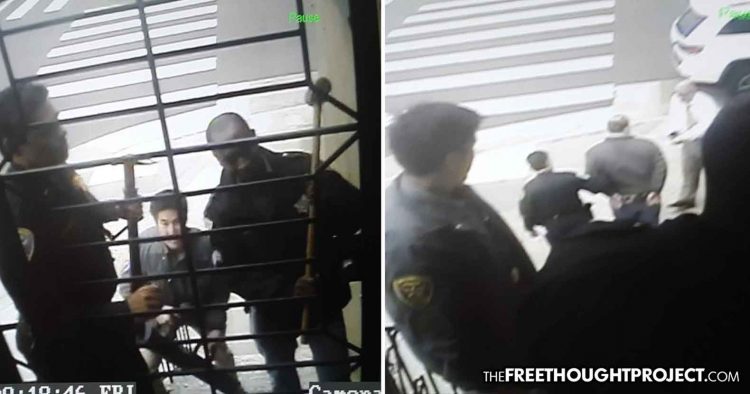 In the land of the free, journalists are raided by SWAT teams in an effort to find out their sources and this is in spite of the law protecting journalists from this very act. Freelance journalist Bryan Carmody fell victim to the police state in California last year as multiple San Francisco cops with sledge hammers and weapons began breaking down his door in an effort to find out his source for a leaked police report. Now, the taxpayers of San Francisco will be paying him $369,000 for it.

Over the past year, Carmody’s case received much deserved attention and and the police department came under heavy scrutiny. After the raid, Carmody filed a lawsuit to go after the tyrants who did this to him. This month, the city of San Francisco announced they will be paying $369,000 to settle claims over its police raid on Carmody’s house last May.

On March 31, the Board of Supervisors on unanimously approved the payout to Bryan Carmody, the San Francisco Chronicle reported.

“This Was A Shame To The City And County Of San Francisco, And I Am Delighted That We Are Settling This Case,” Supervisor Aaron Peskin Said. “And I Hope That We Never In This Town, Ever Again, Suppress The Rights Of The Free Press.”

As the Society for Professional Journalists points out, California’s Shield Law protects journalists from being held in contempt for refusing to disclose their sources’ identities and other unpublished/unaired information obtained during the news gathering process (California Constitution, Article I, § 2(b); California Evidence Code § 1070(a)). California Penal Code section 1524(g) provides that “no warrant shall issue” for any item protected by the Shield Law.

Despite this protection under the law, police still raided Carmody’s home.

According to a report from NPR at the time:

The raids on Carmody’s home and office are the latest in a series of events concerning the death of San Francisco public defender Jeff Adachi in February, at age 59.

Within hours of Adachi’s collapsing in a San Francisco apartment, details from a leaked police investigation into his death were already showing up in news reports, according to the San Francisco Chronicle.

A number of the details in the police report were salacious, suggesting that perhaps one or more members of the police department were trying to tarnish the reputation of Adachi, who was known as a police watchdog and fierce advocate for criminal justice reform. In San Francisco, a public defender is an elected position.

After Carmody sold the report to several outlets, it showed up everywhere and this likely infuriated the police department.

“There were leaks happening all over the place,” Carmody recalled to the Los Angeles Times.

Due to the nature of the report painting police in a negative light and hurting their image, the raid could’ve been retaliatory in nature. Indeed, since it was in direct violation of California law, it appears as such.

After the raid was investigated, the five warrants that authorized the searches were deemed illegal and quashed last summer by the same five judges who initially approved them.

“The city egregiously overstepped its bounds, and the search warrants served on Bryan were unlawful,” David Snyder, executive director of the First Amendment Coalition said. “They were in violation of California’s journalist shield law so I’m happy to see that Bryan is going to get some compensation for that.”

As TFTP reported at the time, according to Carmody, before the raid, two cops came to his home to demand he tell them the source of his report. However, knowing full well that he did not have to, Carmody politely refused. Two weeks later, a SWAT team of cops showed up.

Carmody recalls the officers showing up to his home, who began smashing in his door with a sledge hammer

and a battering ram, without knocking. To avoid having the front of his home demolished by the raid, Carmody opened the door.

This is a screen grab from my surveillance system. pic.twitter.com/qEHc0lpzs4

“I don’t think it was right to break my door down,” he said in an interview. “I’m one of the original independent media companies in San Francisco. This is outrageous.”

When the police came into his home, they kidnapped Carmody for over six hours, holding him in handcuffs.

While they held Carmody captive, the officers tore his home apart, confiscating all of his
computers

Naturally, the police stood by the Stasi-style raid of a journalist’s home, and referred to Carmody’s detainment and theft of his equipment as part of an “investigation.”

David Stevenson, a spokesman for the San Francisco police, told the Chronicle last year that the “search warrant executed today was granted by a judge and conducted as part of a criminal investigation into the leak of the Adachi police report.” He called it “one step in the process of investigating a potential case of obstruction of justice along with the illegal distribution of a confidential police report.”

However, as stated above, this alleged “investigation” was completely illegal.

As NPR notes, Burke said that normally journalists would receive a subpoena, and then get a lawyer to ensure the proper protections. “So much information has nothing to do with the purpose of their investigation,” he said. “If you are looking for one piece of information, that’s why you issue a subpoena.”

But this did not happen and instead, police carried out an extremely disturbing raid on a journalist.

Luckily, because Carmody had committed no crime, he was eventually released, but not before the cops took the report, stole his property, and damaged his home. This is what journalism looks like in 2019.

Despite the illegal nature of the entire raid on this journalist’s home, none of the officers or officials involved in it were held accountable for their actions. Instead, it was the taxpayers of San Francisco who paid up.

Matt Agorist is an honorably discharged veteran of the USMC and former intelligence operator directly tasked by the NSA. This prior experience gives him unique insight into the world of government corruption and the American police state. Agorist has been an independent journalist for over a decade and has been featured on mainstream networks around the world. Agorist is also the Editor at Large at the Free Thought Project.
(Visited 3 times, 1 visits today)
Share
Tweet
Share
Pin