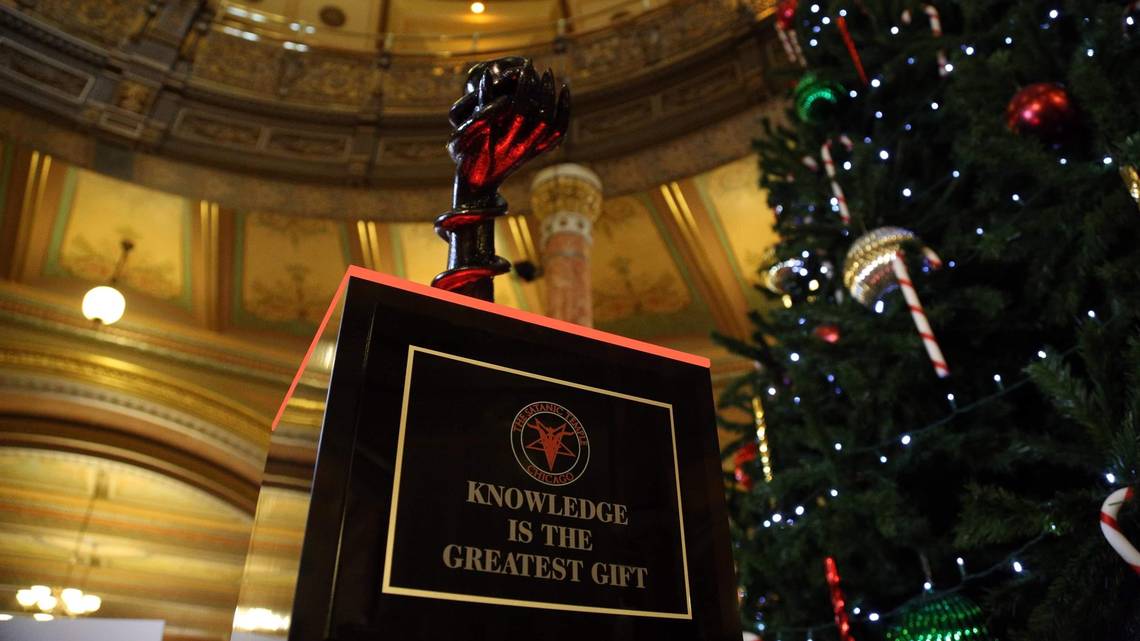 (The Olive) This year in Illinois, in the spirit of fairness of course – the Satanic Temple of Chicago has been granted permission to display a satanic statue in the Illinois state capitol Building.

There is a Menorah display, a nativity display, and now a satanic display.

In a statement according to CNN, a spokesman for the Illinois Secretary of State’s office said:

“We feel it’s a First Amendment issue, we have other displays there — a Hanukkah menorah and Nativity scene,” Drucker said. “If you have displays of one type you need to be consistent and allow everyone to do so, aside from hate speeches and other unacceptable things.” (source)

One person said it was really no big deal that the statue is in the capitol.

“I don’t see a problem with it,” Illinois resident Wayne Rovey told CNN affiliate WMBF. “It seems like it’s a part of the freedom of speech and it doesn’t project a bad message.” (source)

Another found it to be offensive.

In this writer’s opinion, the gentleman that stated the satanic statue “doesn’t project a bad message,” well – that is insane. What may I ask is NOT bad about Satan? Does he maybe not understand that Satan is the very face of evil despite the claims to the contrary by the Satanic Temple?

It would be laughable except that it is not – The Satanic Temple, The Church of Satan, and the notorious Freedom From Religion Foundation (started by an ex minister) all have a hissy fit over anything having to do with God and Jesus displayed in the public eye – yet the symbology of Satan is ok to display in public? It is ok (after school Satan) for those who believe in Satan to be entrusted with our children, filling their heads with nonsense like: God is not real, you can do what you want when you want, Satan isn’t evil, he’s cool. Uh huh.

This country was founded on Christ – not Satan. Satan IS real, and Satan IS evil.

Related: The Must Read Interview with Satan – How to be Saved