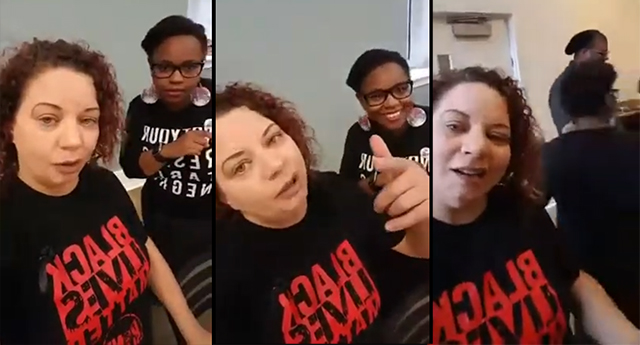 Satch Cole, who has been a leader in the fight for racial justice in Indianapolis, lied about being Black. https://t.co/Wz9K0dhpVx

Indianapolis has its own Rachel Dolezal!!!!!! Her name is Jennifer Benton and she goes by Satchuel Cole. She’s lied and said a black was her father and he’s not. Wooooooooooooowwww. pic.twitter.com/0wdSUMxqNh

From the Indy Star:

Satchuel Cole, a highly visible community leader advocating for racial and social justice in Indiana, has apologized for misleading people about Cole’s own race, saying “I have taken up space as a Black person while knowing I am white.”

Cole — who uses pronouns they/them — worked with Indy10 Black Lives Matter and Indy SURJ, apologized and admitted lying in a social media post. Cole, who also was active in the LGBTQ community, did not respond to multiple phone messages and emails from IndyStar this week.

“Friends, I need to take accountability for my actions and the harm that I have done. My deception and lies have hurt those I care most about. I have taken up space as a Black person while knowing I am white. I have used Blackness when it was not mine to use. I have asked for support and energy as a Black person. I have caused harm to the city, friends and the work that I held so dear,” Cole posted on a Facebook page under the name Satch Paige.

She should have just said she was trans-racial.

Here’s a video of Cole from Feb 2017 doing her shtick:

The news follows the unmasking of white graduate student CV Vitolo-Haddad, who just resigned from her teaching position at the University of Wisconsin-Madison for falsely claiming to be a person of color.

CV Vitolo-Haddad, a far-left nonbinary doctoral student, has resigned from their teaching position at the University of Wisconsin-Madison after falsely claiming to be black or Latino. https://t.co/2sAQRjkHBQ

As first reported by the Wisconsin State Journal, CV Vitolo-Haddad, whose non-binary pronouns are “they” and “them,” admitted to misrepresenting their race. The academic is Southern Italian and Sicilian, not black or Latino as they’ve previously purported.

“In trying to make sense of my experiences with race, I grossly misstepped,” Vitolo-Haddad wrote in a September 8 article on the blogging platform Medium. “I went along with however people saw me. I over-identified with unreliable and unproven family history and latched onto anything I remembered growing up.”

Vitolo-Haddad acknowledged that their actions were “deeply misguided” and “caused an incredible amount of hurt for the Madison community” as well as “everyone who has been exposed to this public reckoning.”

Expressing deep regret to those “I deceived by inserting myself into Black organizing spaces I didn’t belong in,” Vitolo-Haddad called the deception “parasitic and harmful.”

They went on to realise that “perception is not reality” and “[r]ace is not flat” but a “social construct rife with contradictions.”

“I have let guesses about my ancestry become answers I wanted but couldn’t prove,” Vitolo-Haddad stated in a prior confession. “I have let people make assumptions when I should have corrected them.”

[…] Vitolo-Haddad reportedly “lived an economically privileged life” with their white, affluent Italian American family, growing up in a $1.5 million home in Florida and attending an expensive private high school. Her she is doing her thang: The news also follows the unmasking of George Washington University Black Studies professor Jessica Krug, who claimed she was Black and a “boricua” (Puerto Rican), as Jewish/

Just a video of Jessica Krug, professor who faked being black for social justice clout, casually explaining how gang members killing a 15-year-old with machetes is actually good since the kid wanted to become a police officer. pic.twitter.com/Ehuod57xDX

Of course, the top dog of them all who somehow has still yet to be officially canceled is Shaun King. Meanwhile, the Black Lives Matter movement’s financing arm is run by convicted terrorist Susan Rosenberg, who is Jewish, and was financed from the beginning by billionaire George Soros, who is also Jewish.

Meanwhile, the majority of Black Lives Matter protesters out in the streets according to surveys are liberal white women with college degrees! Are there any Black people involved in Black Lives Matter at all?!?!