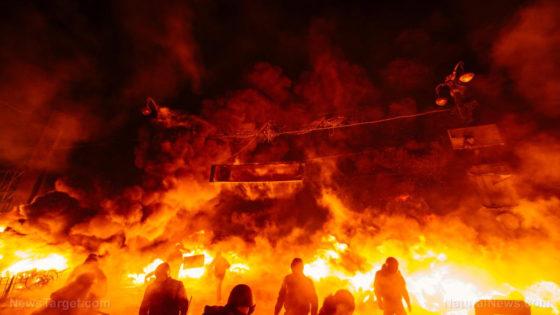 Serbia has been erupting over the lies their government and media have been pitching related to the hoax known as coronavirus/COVID-19. And they aren’t letting up anytime soon.

Tyler Durden at Zero Hedge has the story.

Social unrest has rocked Belgrade and other cities in Serbia this week in response to President Aleksandar Vucic’s reintroduction of government-curfews over surging coronavirus cases.

Serbian police fired tear gas and were dressed head to toe in riot gear, as demonstrators, mostly young people, assaulted police on Tuesday and Wednesday. The New York Times said the unrest was some of the first in Europe since the pandemic began – also indicating the severity of the unrest was worst since the rule of Slobodan Milosevic in the 1990s.

Completing this poll grants you access to DC Dirty Laundry updates free of charge. You may opt out at anytime. You also agree to this site's Privacy Policy and Terms of Use.
Expert Says This is a “Must-Buy” $7 Tech Stock. Click for Details.
Manward Letter
Ads by Revcontent
Find Out More >
64,801

“We don’t mind staying home for another three days — that wasn’t the problem,” said Dragana Grncarski, 45, who has been protesting this week.

“However, they’re playing with our minds and with the truth,” Grncarski added. “When it suits them to do elections, there is no corona. They organized football matches and tennis matches, and because of that we have a situation where the hospitals are full.”

“Citizens have been constantly deceived and lied to for political ends,” said Tena Prelec, a political expert on Southeast Europe at the University of Oxford.

Vasiljevic said the “excessive use of force” by the government to combat rioters hasn’t been seen since the days of “Milosevic in 1996 or 1997.” Milosevic led Serbia through the Balkan Wars and was later charged for war crimes.

Demonstrators stormed the Serbian parliament building in Belgrade after President Aleksandar Vucic announced stricter measures, including the lockdown of the capital, over the weekend to halt the spread of the coronavirus https://t.co/dFlIVgyOkG pic.twitter.com/3E24L77ftv

Serbian Defense Minister Aleksandar Vulin was convinced the demonstration against the re-implementation of the lockdowns in Belgrade and other cities were “carefully planned” – and aimed at igniting a civil war.

“We have terrible violence on the streets, we have an attempt at a coup, we have an attempt to seize power by force and an attempt to provoke a civil war in Serbia. It cannot be described and explained differently. There is no reason, there is no reason to set fire to the Assembly, to set fire to the City Hall in Novi Sad, to attack the police, to beat people on the streets, to endanger life and to endanger the property of Serbian citizens ,” said Vulin, a guest on the show Novo jutro on TV Pink, was asked to comment on the events in the previous two evenings.

Russian Times caught some of the unrest on video earlier this week. Young Serbs can be seen clashing with riot police in front of government buildings.

“There were indications of foreign involvement, and some criminal faces were there, too,” Vucic said on Wednesday afternoon. He added that virus cases will likely flare-up because of the mass unrest.

“I wonder who will be responsible for the fact that hundreds and thousands of people became infected yesterday and the day before yesterday,” he said

Vucic has also backtracked on the curfew after several days of unrest – instead, the government is expected to impose restrictions on public spaces and possibly limit business hours. There’s also talk of fining people for not wearing masks.

When it comes to outside forces meddling in Serb domestic affairs, Russia came out on Thursday, denying it had any involvement.