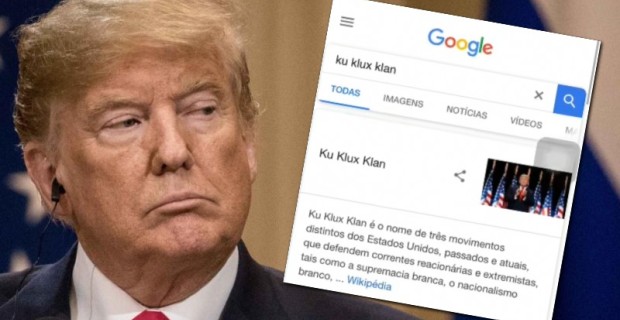 People in Brazil are reporting that when a user performs a Google search for the “Ku Klux Klan,” an image of Donald Trump appears at the top of the results page.

Video posted to Twitter shows the search being performed which immediately leads the user to an image of the U.S. President directly next to the words “Ku Klux Klan”.

When you Google search for "Ku Klux Klan" in Brazil, Trump's picture comes up.

But it's not rigged, honest.https://t.co/8Mh6Zz5Fxf

The issue is similar in nature to when Google users noticed back in May that searches for the California Republican Party resulted in the party’s ideology being listed as “Nazism” by Google.

Google claimed that the result only appeared because the party’s Wikipedia page had been vandalized.

The Twitter video will add fuel to the fire that Google is being rigged to be adversarial to Trump, a claim the president made this week on Twitter.

“Google search results for “Trump News” shows only the viewing/reporting of Fake News Media. In other words, they have it RIGGED, for me & others, so that almost all stories & news is BAD,” tweeted Trump.

“Fake CNN is prominent. Republican/Conservative & Fair Media is shut out. Illegal? 96% of results on “Trump News” are from National Left-Wing Media, very dangerous. Google & others are suppressing voices of Conservatives and hiding information and news that is good. They are controlling what we can & cannot see. This is a very serious situation-will be addressed!” he added.

Google responded by insisting it was not politically biased but acknowledged that it had ‘improved’ its algorithm to ensure “high-quality content in response to users’ queries.”

Trump subsequently posted a video with the hashtag #StopTheBias pointing out that Google had promoted Obama’s state of the union speeches for years but not his.