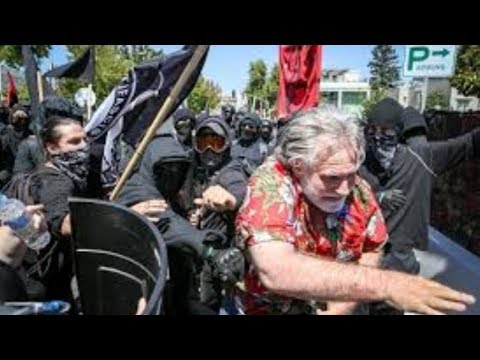 Maybe it won’t be too bad

The first rule in not being a victim is having the WILL to ACT as soon as you are threatened.

Whether that means screaming at the top of your lungs, kicking, punching, or scratching at the eyes of your attacker—you have to DO something. Victims, on the other hand, stand by hoping it won’t get worse if they just don’t make their attacker angry. Those are the ones that end up bound, raped, beaten senseless, and/or dead.

How are YOU (and I) any different than the above-mentioned victims? What are we doing to fight back? The few people (like the Proud Boys) who have been willing to stand up to the real fascists, find themselves outnumbered and attacked, not just by the hoodlums, but by the criminal justice and political system. Where were we?

Every week we read about Antifa beating up on elderly people, or women, or catching someone alone. Boy, that makes me mad—how about you? But mad enough to DO something about it?

You can bet those in office, both parties, are noticing our absence from the arena. Any guesses how that is interpreted? Yep, it is a green light to maintain the status quo. Do you think Mitch (Shanghai) McConnell, Nancy Pelosi, or Chuck Schumer are worried about our bitch sessions on sub-reddit groups?

They PUSH, and then they wait

I’m in my seventh decade and I’ve noticed what G. Gordon Liddy used to call “creeping incrementalism” in action. Politicians take a little away, be it tax money or freedoms—and then they watch to see how we react. If we don’t storm the castle with pitchforks and tar barrels, they take more and more.

If these scoundrels are lucky, we might not even notice what they’ve done. Can you imagine how we would respond if each payday we were paid in cash, and then had to give back a pile of it to cover our taxes, insurance, and other government fees like Social Security? Do you think we might be pushing back if the process wasn’t nearly invisible?

But I have too much to lose

By now I hope you are feeling at least a little uncomfortable—I am. Like most of you, I value what I have managed to accumulate, and I value my freedom. In the past, I have stepped into the breech to push back against corrupt political power. My will to act cost me a lot financially, but the sacrifice was worth knowing I wouldn’t be cowed. I know some of the true cost of threatening the status quo, and I bet some of you do too.

When I look back in history at our founding fathers, or more recently at Cliven Bundy the Nevada Rancher, and all the American patriots who showed up at his ranch to back down the Harry Reid’s BLM SWAT team, I remember the true power of this nation. I remember men and women who weren’t afraid to ACT when the time came.

The deck is stacked against us

I won’t lie to you and say all conflicts with authority have happy endings, but I’ll guarantee you that a blanket FAILURE to stand up will result in the complete annihilation of our freedoms and our way of life. We are beyond the point where we can afford to stand by, hoping someone else will step up and fix these problems for us. We can’t be too afraid to raise our voices and shake our fists at the power brokers who would control our lives and our futures.

It isn’t about attacking Antifa or the government

I read the liberal and conservative comment boards like most of you do, and they often run red with bloody intentions, but the reality is, NUMBERS speak louder than threats. If there is a conservative protest or gathering in your area—show up! And don’t just show up, plan on taking action if the people around you are physically attacked. United we stand! Today, especially in places like Portland, the police are content to stand idly by while communist thugs have their way with good American citizens. Intervene!

Take a friend or two or three. Have a little bail money set aside, but most importantly, have someone capturing everything on camera. Self-defense is still legal in America, and if you are attacked during your rally you have a right to defend yourself, but that doesn’t include beating someone senseless. Don’t bring illegal weapons, and don’t instigate violence. The point is to protect your rights (and those around you) to express your political beliefs in a public forum without fear of physical reprisal.

We can be certain that the liberal army of communist malcontents will be in the streets trying to antagonize and intimidate us. Show up with the WILL to ACT. We can’t wait until the next election to be noticed by our political leaders. With the impeachment spectacle on the near horizon, we have to make certain our politicians see the magnitude of our dissatisfaction.

If anyone is going to be politically intimidated, it needs to be the people in Washington, our statehouses, and municipal chambers.

David Brockett is a Vietnam veteran, former USMC pilot. Following his time in the military, he worked in healthcare as a counselor and hospital administrator. He also writes articles on politics, religion, gun-rights, and current events. In his free time, he and his wife volunteer at the local food bank, and with veteran’s organizations. They divide their time between their home state of Texas, and Idaho.