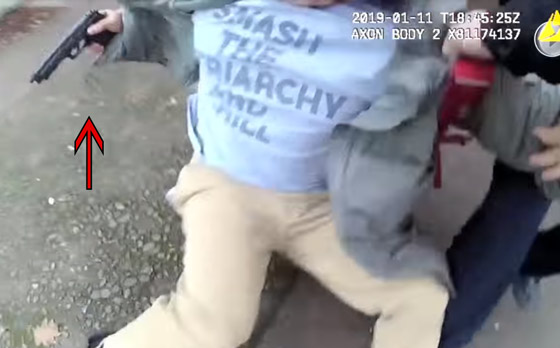 You didn’t see this one in the mainstream media because the man at the center of this report was not wearing a MAGA hat, but we’re going to show it to you anyway.

According to reports, Charles Landeros, a man linked to the ANTIFA-related “Community Armed Self Defense” group, was involved in a custody dispute at Cascade Middle School in Eugene, Oregon. When police showed up to escort the man off campus, law enforcement body cam videos show he went completely nuts and attempted to evade them.

As officers became more aggressive in forcing him out of the school, Landeros reaches for a concealed handgun (visible for a short moment in his right hand, as body cam video below shows).

The situation immediately goes from bad to worse for Landeros, as police reach for their own weapons and fire back.

Landeros was shot and killed in the doorway area of the school.

According to The Daily Emerald, Landeros led a student protest at Oregon University in 2017 and was a member of left-leaning activists groups.

About an hour before the shooting Landeros reportedly posted a threatening commenton Facebook:

About an hour before the shooting, Perlow said, someone tipped the police department that a Facebook account with the name “Charlie Landeros” had commented “Death to all pigs” in a comment section of the post. The police department’s social media manager attempted to locate the comment but both it and the “Charlie Landeros” Facebook account had been deactivated or deleted.

Video of the shocking incident:

It’s not clear if Landeros was one of the members of ANTIFA groups preparing for armed confrontation as noted previously in Leftists Are Preparing For Armed Confrontation.