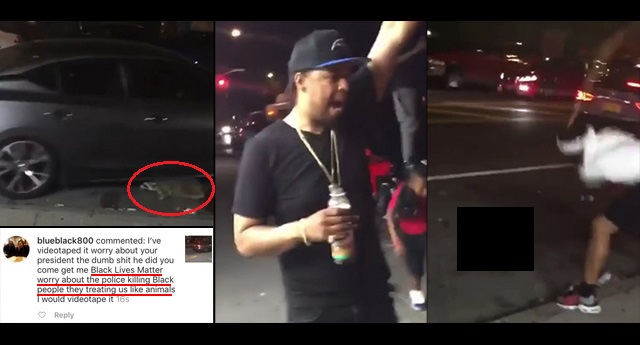 Shocking video out of New York City which went viral Tuesday on social media shows a mob running over a raccoon and beating the animal to death with a baseball bat in the street as onlookers celebrate and cheer.

The video shows the panicked raccoon struggling to escape being run over twice by a car and then being ruthlessly beaten to death with a baseball bat by two separate men.

WARNING: The video is deeply disturbing:

An animal rights activist who goes by Lite Pimp on Twitter said the video was allegedly recorded by a man named “James Blue” on Facebook (whose accounts on Facebook and Instagram appear to now be disabled).

Blue allegedly dismissed outrage over the killing by saying that “Black Lives Matter” and people should “worry about the police killing Black people” and “treating us like animals.”

James has a lot to say. pic.twitter.com/zda4MBQbaW

A woman claiming to be Blue’s niece allegedly said, “Only white peoples worry about this.”

The video similarly drew outrage on Reddit with users saying it’s the “worst” video they’ve ever seen on the site and “Raccoon Lives Matter.”

“Can we address the elephant in the room?” one user asked.

“Nope you’ll get banned and some f***ing losers will probably try to doxx you,” another responded (both comments have since been deleted as predicted). It’s not just raccoons which are being killed in the streets of New York City.

The Wall Street Journal reported Sunday that homicides “rose 29% to 244 from Jan. 1 to Aug. 2 from the same period last year.”