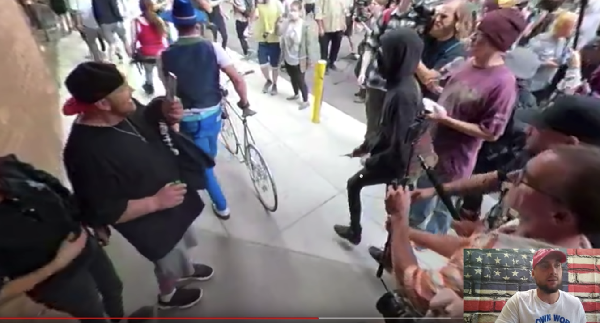 (Natural News) If ever there was an organization that deserved to be labeled a domestic terrorist group, it’s Antifa — as some of its members have proven again and again, including recently during demonstrations in their de facto home of Portland, Ore.

An independent journalist named Brandon who happened to be in Portland earlier this month during yet another demonstration that turned violent between conservatives and far-Left Antifa thugs managed to catch video of what appears to be an attempted stabbing of a Marine veteran who wasn’t part of the event.

In dissecting video of the former Marine who was walking his bike through a crowd of gawkers and hooded Antifa demonstrators, he caught one of the thugs pulling out what appears to be a knife or a shank — something sharp. After pulling the object out of his pants pocket, the thug then slowly moves toward the unsuspecting former Marine as though he were positioning himself to stab him.

That’s when Brandon managed to insert himself between the former Marine and the Antifa thug. Watch the encounter here.

The marine was sprayed in the face by a domestic terrorist with a substance that appeared to be mace. After that, bottles were thrown toward the veteran as he was trying to peacefully walk away. His life was in danger at this point, as the mob worked themselves into a frenzy.

A domestic terrorist was shown with a knife in the video footage and walked behind the marine in a position to put it into the marine’s neck, but independent journalist Brandon got in the way before he was able to do it. The terrorist then slunk back into the audience and put his knife away. 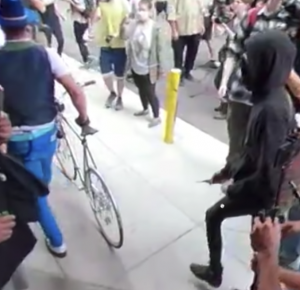 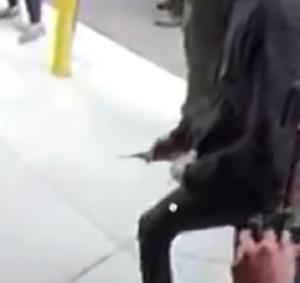 “This is clear cut evidence of them being a terrorist organization,” Brandon said regarding the footage while imploring President Trump to declare ANTIFA a terror group.

“What the hell are you thinking? This is the United States of America, [and] you’re going to stab somebody who served our country from the back with your mask on like a coward? You’re cowards,” he said. (Related: Man who firebombed government building belonged to armed Antifa group promoted by CNN and the left-wing media.)

At the same event, other Antifa thugs surrounded a man and a young girl, reportedly his daughter, intimidating and, eventually, attacking the man. They also smashed windows on buses and maced occupants. And while the Portland police presence was heavy, there clearly were not enough officers to mitigate the threats and the actual instances of violence.

Which brings us back to Antifa as a terrorist organization: President Trump has to do it because his predecessor’s administration, which was about as Left-wing as they come, did so in every way but ‘officially.’

As Politico reported, the FBI and Department of Homeland Security designated Antifa anarchists as domestic terrorists in 2016, even as both agencies warned the group will be responsible for more violence in the future:

Federal authorities have been warning state and local officials since early 2016 that leftist extremists known as “antifa” had become increasingly confrontational and dangerous, so much so that the Department of Homeland Security formally classified their activities as “domestic terrorist violence,” according to interviews and confidential law enforcement documents…

And, of course, they have been responsible for additional violence.

If DHS “formally classified” Antifa actions as “domestic terrorist violence” in 2016, why does President Trump need to declare it now?

Because DHS doesn’t arrest people for domestic terrorism — the FBI does. And the Justice Department prosecutes them. That’s why the president has to intervene and order DoJ and the FBI to do it.

Because if he doesn’t, as evidenced by the latest video dissected by an independent journalist, someone’s going to be killed by one of these terrorist thugs.