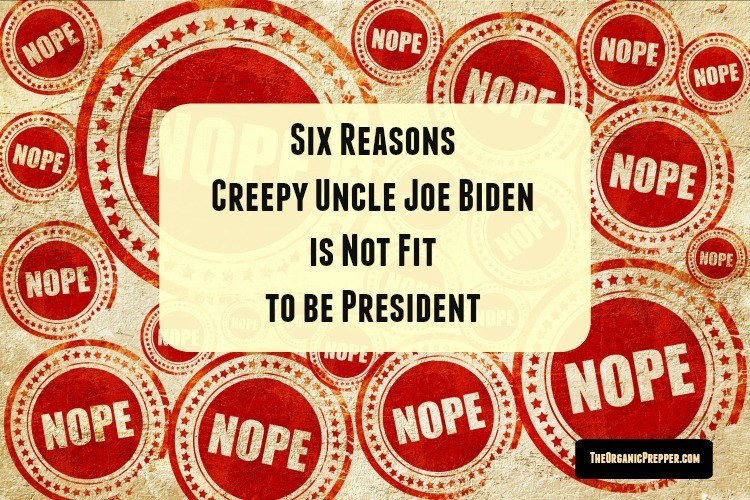 Editor’s Note: When a man is so absolutely vile that Prepper websites start getting political, it might be time to pay attention. “Joe Biden is like that creepy uncle you avoid at family functions.” That might be the understatement of the year. Biden is more like that uncle that no one talks about, you know the one… He’s been in prison for decades and is all but forgotten. Unfortunately it doesn’t work like that in American Politics. The more perverted they are, the higher they climb it seems. God help us. -Dean Garrison, Editor

We usually don’t discuss politics here at The Organic Prepper, but when I heard that Joe Biden officially entered the 2020 Presidential race, I just had to say something.

There are myriad reasons Biden is not fit to be president. Here are six of them.

Joe Biden is like that creepy uncle you avoid at family functions.

I find it extremely odd that many of the same people who lambasted Donald Trump over (admittedly inappropriate and rather disgusting) things he has said about women are just fine with Biden’s touchy-feely antics, particularly when young girls are the victims.

Despite the fact there are hours of video footage showing Biden behaving badly, many folks on the left continue to make excuses for him.

The following is one of the many video compilations of Biden touching women and children.

Lucy Flores is one of the few Democratic politicians who has spoken out about Biden’s handsy-ness. When she was preparing to give one of her final stump speeches in a race for lieutenant governor in Nevada in 2014, she got Bidened:

“Why is the vice-president of the United States touching me?” Flores wondered.

Flores recounts her experience with Joe Biden in a first-person essay for New York magazine, describing an incident in 2014 when Biden came up behind her, leaned in, smelled her hair, and kissed the back of her head.

“Biden was the second-most powerful man in the country and, arguably, one of the most powerful men in the world,” Flores wrote. “He was there to promote me as the right person for the lieutenant governor job. Instead, he made me feel uneasy, gross, and confused.” (source)

Biden defended his history of invading personal space and unwanted touching in a short video he shared on Twitter recently.

He lied about his first wife’s death.

Neilia and Naomi Biden – Joe’s first wife and their baby daughter, respectively – were killed in a car accident in 1972. The late Mrs. Biden drove into a busy intersection, into the path of an oncoming truck driven by a man named Curtis Dunn. An investigation found Dunn was not at fault for the crash, but that didn’t stop Joe from telling some pretty blatant lies about the man, as Jack Fowler explains in The Most Disturbing Thing About Joe Biden:

It was a heartbreaking story all around, and with officials leaving no doubt of the truck driver’s complete innocence, what was the point of doing or saying anything more than letting Neilia and Naomi Biden rest in peace? As for Joe Biden, the tragedy was so utter that the accident’s circumstances were best left unremarked. Never mind unembellished.

For some reason, the evidence shows, in the early 2000s, Joe Biden began to remark in public that his wife had died at the hands of someone who “allegedly . . . drank his lunch instead of eating his lunch.” That Curtis Dunn “was an errant driver who stopped to drink.” That drunk-driver story spread into news accounts. The Dunn family, who had strong sympathy for Biden, was shocked by the sullying of their now-dead father. They wrote the senator and asked him to stop and reminded him of the exonerating investigation.

Per a 2010 Biden profile in The Atlantic:

For many years, he described the driver of the truck that struck and killed his first wife and their daughter in December 1972 as drunk, which he apparently was not. The tale could hardly be more tragic; why add in a baseless charge? The family of the truck driver has labored to correct the record, but Biden made the reference to drunkenness as recently as 2007, needlessly resurrecting a false and painful accusation.

This is truly disturbing. But by our current standards, hair-sniffing rates condemnation, while the false accusation of an innocent dead man, and the embellishment of a personal tragedy — could the Biden tragedy be more tragic? — are forgotten and/or ignored. (source)

While the deaths of loved ones are always tragic, that does not justify Biden telling a significant and damaging lie about the event.

He has lied about other things, too.

One of the most troubling lies Biden told was about the attack on the consulate in Benghazi, Libya that resulted in the deaths of US ambassador J. Christopher Stevens and three other Americans.

“We weren’t told they wanted more security there.”

We know this is not true, based on the testimony of Eric Nordstrom, who was the regional security officer for Libya in the months before the attack. In a July cable, he said he wanted 12 guards plus military trainers. Nordstrom said he told his superiors that the embassy mission needed more armed security – twice.

Biden also took solo credit for ending genocide in Bosnia, but in reality, he was one of many who called for an end to the war there.

“When he was a senator from Delaware, Biden supported most every tough-on-crime policy you can imagine, from mandatory minimums to civil asset forfeiture to an expanded death penalty. He was one of the chief architects of the 1994 crime bill that helped usher in an era of mass incarceration,” Reason reported.

The bill is often blamed for the explosion in the prison population and leading to our current era of mass incarceration. (source)

For more on this, take a look at this detailed article: Joe Biden’s controversial criminal justice record, explained

Earlier this year, Biden expressed some regrets about his role in the drug war and mass incarcerations, but it’s a bit late for apologies – both have resulted in the destruction of thousands of lives.

He pushed policies that deprive men of due process.

Biden was at the forefront of the Obama administration’s efforts to force colleges to adjudicate sexual misconduct under new standards that were horribly unfair to the accused. He was a leading spokesperson for the White House mission of changing the culture around consent norms, reports Politico:

In April 2011, Biden and Education Secretary Arne Duncan announced the release of a bombshell letter, with the bland greeting “Dear Colleague,” to the country’s 4,600 institutions of higher education. It laid out new directives for how campuses were to root out and punish sexual assault. It was the beginning of a concerted effort that radically remade how students could interact sexually, with severe penalties for those who violated increasingly expansive codes of conduct. The accused were to be judged under the lowest standards of evidence, the definitions of misconduct were widely broadened, third-party reports could trigger an investigation even if the alleged victim did not think there had been a violation, and more. Title IX is the federal law that prohibits discrimination on the basis of sex in education. Under Obama administration insistence, college offices tasked with administering Title IX became vast and powerful bureaucracies, and students were encouraged to report any perceived violation. (source)

Male students punished under the system he helped to create have been increasingly fighting back, the Politico report explains:

They have filed more than 400 civil suits, contending that they have been unfairly accused and deprived of their rights. These suits have been getting increasingly favorable—sometimes outraged—rulings from judges. In a recent City Journal article, historian KC Johnson points out that “Biden responded with fury to Secretary of Education Betsy DeVos’ attempts to create fairer procedures for adjudicating campus sexual-assault claims.” (source)

Reason has covered Title IX cases for years. To read more about how damaging this policy has been to young men, see their archives here.

Biden claims to be “Middle-Class Joe” but is anything but.

It isn’t unusual for politicians to be far wealthier than the average American. Politicians lying to gain favor among the masses isn’t anything new, either.

But Biden is a special case. He often refers to himself as Middle-Class Joe, but he is anything but. He has a $2.7 million vacation home, charges more than $100,000 per speaking gig, and has a book deal that is likely worth seven figures.

“Another house that Biden bought in Wilmington, Del., for $350,000 in 1996 is now worth almost $1.9 million, according to an estimate by the real estate website Zillow. The Bidens rent a third home in Virginia, near the community college where Jill Biden teaches,” according to Politico.

Do you think Biden is fit to be president? Please share your thoughts in the comments.