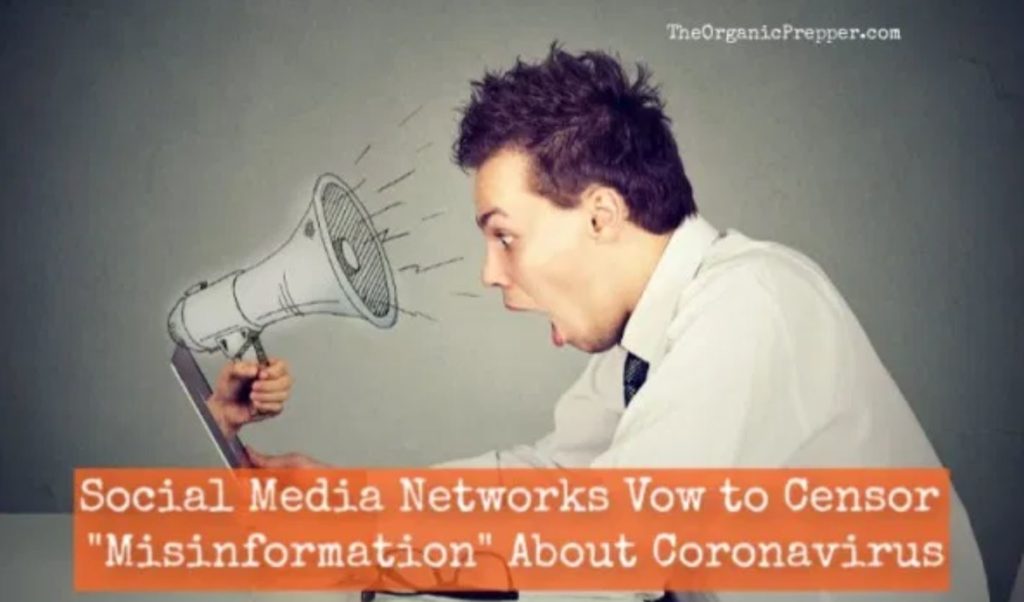 Yesterday, social media giants like Facebook and Twitter, and search engine Google announced their intentions to censor – um, crack down on – so-called “misinformation” about the coronavirus that is spreading across the globe.

Before we get started here, admittedly, there’s some absolutely terrible advice out there about preventing or curing coronavirus. There are some really wild stories about the origin of the virus which may or may not be true. But the issue here is that social media networks are setting themselves up as the arbiters of truth, making it seem as though the rest of us are incapable of separating good information from bad information.

Our global network of third-party fact-checkers are continuing their work reviewing content and debunking false claims that are spreading related to the coronavirus. When they rate information as false, we limit its spread on Facebook and Instagram and show people accurate information from these partners. We also send notifications to people who already shared or are trying to share this content to alert them that it’s been fact-checked.

We will also start to remove content with false claims or conspiracy theories that have been flagged by leading global health organizations and local health authorities that could cause harm to people who believe them. We are doing this as an extension of our existing policies to remove content that could cause physical harm. We’re focusing on claims that are designed to discourage treatment or taking appropriate precautions. This includes claims related to false cures or prevention methods — like drinking bleach cures the coronavirus — or claims that create confusion about health resources that are available. We will also block or restrict hashtags used to spread misinformation on Instagram, and are conducting proactive sweeps to find and remove as much of this content as we can. (source)

So, don’t worry, friends. “Independent fact-checkers” from the Ministry of Truth will protect you from conspiracy theories and false claims.

Maarten Schenk from Lead Stories, a fact-checking organization working with Facebook, scoffed at some of the “conspiracy theories” he’s seen in a comment to CNN.

“It always has to be something sinister,” Schenk said of the conspiracy theorists’ misinformation, which includes false claims that the virus was the creation of a government.

Some people, Schenk said, are “not trusting the narrative about the numbers of deaths and infections.” (source)

To be perfectly honest, whenever someone refers to a particular view as “the narrative” I’m even less likely to trust it than I was before. And I haven’t trusted the numbers coming out of China from the very beginning, as I wrote here.

Google is pushing back “misinformation” in search results.

Google is bumping any site providing perceived “misinformation” back in the search results and putting “authoritative” sources on page one.

A Google (GOOGL) spokesperson pointed CNN Business to policy changes in recent years for Google and its video platform YouTube, which are designed to surface information from authoritative sources at the top of search results. Like Facebook, the company doesn’t wipe false claims from its platforms entirely. (source)

Having been bumped back by Google numerous times in the past, I can tell you, it’s a real blow to inbound traffic when this occurs. While you personally may not use Google, keep in mind that it is the most widely used search engine in the world, with 81.5% of the market share. If they are pushing back information – oh, of course, I mean misinformation – then most folks will never see it.

According to CNN, Twitter is providing people with the best possible information when they search the coronvirus hashtag.

On Twitter, users searching for “coronavirus”in the US and other countries, including Hong Kong, Brazil, and Australia, are first prompted to visit official channels of information about the virus. In the US, Twitter directs users to the Centers for Disease Control and Prevention, beneath a bold headline that reads: “Know the facts.”

A Twitter (TWTR) spokesperson told CNN Business on Tuesday that the company has not seen a coordinated increase in disinformation related to the coronavirus. In a blog post Tuesday, the company said it had seen over 15 million tweets about the coronavirus in four weeks. (source)

But of course, as always, it goes further than that.

I’ve written repeatedly that the best coverage I have seen of the coronavirus has been on Zero Hedge. They’ve done a lot of no-holds-barred reporting and broken numerous stories about the virus and its possible origins. They’ve been careful to be extremely clear about whether something is a question or a statement, and they cite numerous sources for their work.

They’re also not afraid to be controversial.

Shortly after they posted an article about the extremely unusual makeup of this particular coronavirus (based on a scientific study that called the makeup “unlikely to be fortuitous,” their account was suspended. I immediately thought it was because of the article that suggested we could be dealing with a bioweapon, but according to Zero Hedge, it was something else entirely.

Twitter accused them of harassing a guy by posting his (already publicly posted) phone number and workplace. ZH reports:

What appears to have happened is that twitter received a complaint from the website best known for publishing the discredited Steele dossier when no other media outlet would touch it, and making cat slideshows of course, Buzzfeed, in which someone called Ryan Broderick writes that Zero Hedge “has released the personal information of a scientist from Wuhan, China, falsely accusing them of creating the coronavirus as a bioweapon, in a plot it said is the real-life version of the video game Resident Evil.” (source)

By all means, Twitter should certainly take the word of someone who works for a site best known for quizzes to help you figure out what kind of potato you really are to delete a news organization’s account.

It’s also important to note that ZH didn’t post anything personal that wasn’t already publicly made available by the subject of the article himself.

…we did not release any “personal information”: Peng Zhou (周鹏) is a public figure, and all the contact information that we presented was pulled from his publicly posted bio found on a website at the Wuhan Institute of Virology which anyone with access to the internet can pull from the following URL: http://sourcedb.whiov.cas.cn/zw/rck/201705/t20170505_4783973.html, which is also the information we used. (source)

So who do you want filtering information for you?

While I have seen a lot of terrible advice – drink bleach or a bottle of vinegar to “cure” coronavirus, use this essential oil and you’ll never get coronavirus, simply cut an onion in half and leave it in the room and it will absorb the coronavirus cooties, and much more quackery – I still don’t believe that social media networks and search engines should be able to filter what people see. We are (allegedly) free individuals who can think for ourselves.

Instead, we’re provided with “narratives” and biased information. That’s something we here at The Organic Prepper have warned about repeatedly. If you can’t trust your intel, it makes it difficult to make informed decisions.

This just makes it seem like there’s something to hide.

If anything, this crackdown on any alternative views, treatments, or theories makes me even more suspicious because it’s a clearcut case of Propaganda 101.

Propaganda is information that is used primarily to influence an audience and further an agenda, which may not be objective and may be presenting facts selectively to encourage a particular synthesis or perception, or using loaded language to produce an emotional rather than a rational response to the information that is presented.

This is a technique that is as old as time.

Whenever you see some pop-up or some “correction of misinformation” the first thing you should do is ask yourself, is what are they trying to hide? It may legitimately be bad advice (like that whole drinking bleach thing) but it may also be something more sinister.

I don’t know about you, but now I’m even more curious and doubtful about the “narrative” than I was before. What is it, really, that they don’t want the rest of us to know?