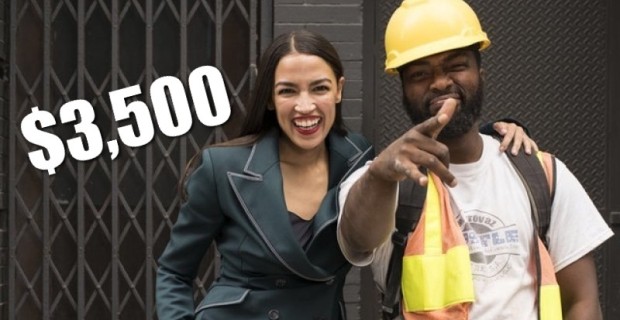 Socialist Alexandria Ocasio-Cortez’s working class credentials are under scrutiny again after she was pictured wearing a $3,500 outfit for a photo-op with construction workers.

The outlay on such an expensive outfit left some wondering if such wealth could have been redistributed better.

“This so pisses me off,” responded one Reddit user. “Bugs the shit out of me that she wants to raise taxes, pretending to champion the poor….in a $3k outfit.”

“I’ve never met a socialist who had the faintest idea of redistributing a penny of their own money. They’re all about taking all the time,” added another.

“As a barmaid she took all $500 of the tips after a holiday night at the bar, stiffing the waitresses with only $50,” responded another user. “She is only a socialist if she can take as much as she wants and leave the scraps for everyone else.”

She’s wearing more than what he earns in a month.

Back in July it was revealed that despite Ocasio-Cortez claiming to be a rough and ready working class girl from the Bronx, she mostly grew up in wealthy Westchester County.

Numerous mainstream media biographies of Ocasio-Cortez omit the fact that she basically grew up middle class, with her architect father able to send her to Boston University to study economics and international relations.

One wonders how disconnected Ocasio-Cortez is now to ordinary Americans given that she is swanning around in $3,500 outfits while claiming to be a working class hero.