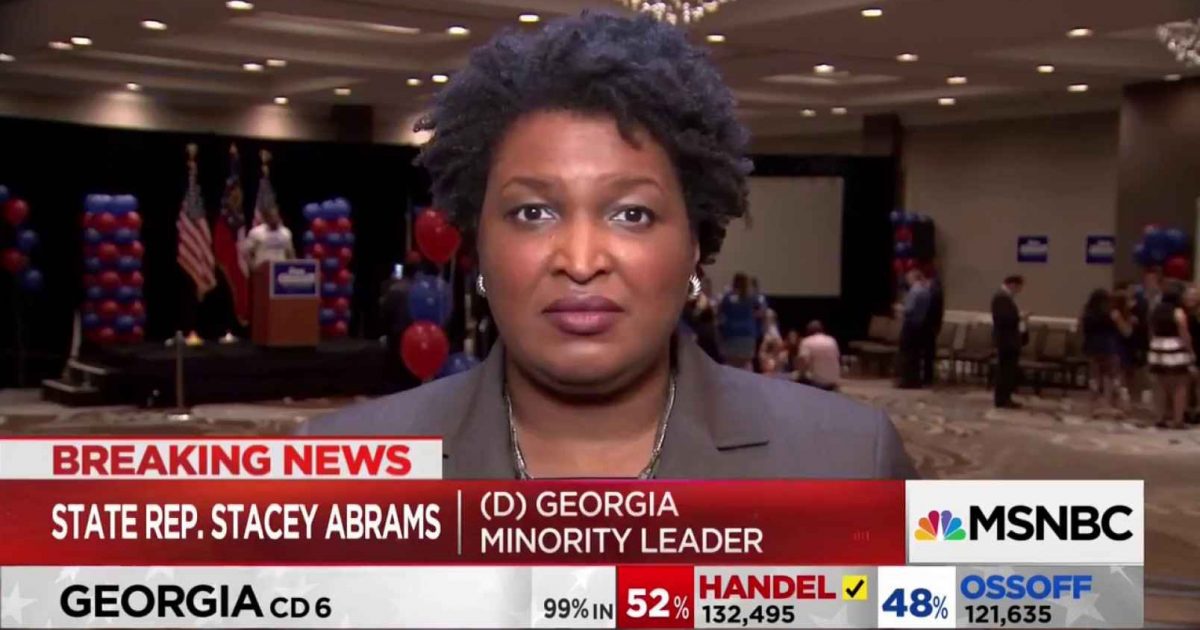 Why anyone would vote for this woman is beyond me. Yes, she is totally delusional, and recent statements by the sore loser from Georgia make it clear that she is delusional and probably needs mental help. Abrams said she was not delusional after stating, “We Won,” and that she won’t be a “good sport” nor will there be any conceding elections in the future. Or apparently, in her past.

.@staceyabrams giving defiant speech to @AnniesListTX, saying she won't be a "good sport" & go away quietly after election in which she was wronged. "We don't have to concede elections anymore, b/c when we concede, we are condoning systems that are used to oppress us," she says.

One of our favorite moments from .@staceyabrams in #Houston for .@AnniesListTX while speaking about keeping up the fight: "usually candidates feel like they have to concede if they want to run for office again to show that they're a good sport. I am not a good sport." pic.twitter.com/SHOstTIWMA

“We are in a state of crisis,” Abrams told a crowd of largely female Democrats at the annual Houston fundraiser hosted by Annie’s List. “They are trying to erase our democracy, corrode it so much so that we stop believing in it. Because they know that that’s the only way to hold onto the power they have.”

Abrams then added, “I’m here to tell you a secret that makes Breitbart and Tucker Carlson go crazy: We won. I am not delusional. I know I am not the governor of Georgia – possibly yet.”

Yep, she’s delusional alright, but then that should have been apparent in her losing gubernatorial race, as well as the statement before the last one where she, like a lot of politicians, refers to “our democracy.” Ms. Abrams needs to learn the Constitution, which does not state that it is to ensure a democracy, but rather that it ensures a republican form of government.

Abrams has continued to refuse to concede her loss in 2018, saying in March, “I did win my election. I just didn’t get to have the job.”

No, you lost, Stacey. You lost! You’re a loser.

See what the entire “We’re all winners” nonsense gets you? It gets you people like Stacey Abrams.

I’m not too sure about this metric,

There are plenty of people who believe that they are…

1. The Czar of Russia

2. The President of the United States

…while being willing to concede that most people don’t currently recognize them as such. This doesn’t mean they’re not delusion. It just means they’re not completely delusional.

A more accurate concession by Abrams would be, “I’m not completely delusional”.

Of course, Abrams, like Hillary Clinton, simply could not simply concede her loss to Governor Brian Kemp, and she took time to take a shot at Governor Kemp.

For the first several minutes of her speech, Abrams rehashed elements of her losing campaign, which she has chalked up to efforts she says were aimed at suppressing votes, such as long lines and low numbers of provisional ballots. On Friday, she said Kemp played a central role in the alleged efforts.

Transitioning to Texas, Abrams told the crowd at the Hilton Post Oak hotel that Democrats would face similar challenges in 2020 across southern states, including here. She framed the alleged voter suppression efforts as evidence, however, that Democrats are on the verge of flipping states such as Texas.

“I’ve never seen a community of people work so hard to strip away our rights and our humanity as fast as they can,” she said.

Yes, she has witnessed that, but there is not an effort to suppress people’s right to vote. What is going on though is that her political party has sought to violate law through voter fraud by those living and dead, including those who simply are not eligible to vote.

Indeed, Stacey Abrams is delusional and Georgia should breathe a sigh of relief knowing she is not in the governor’s mansion.

Sadly, she actually thinks she has a shot at the White House in 2020… now that’s delusional, too!