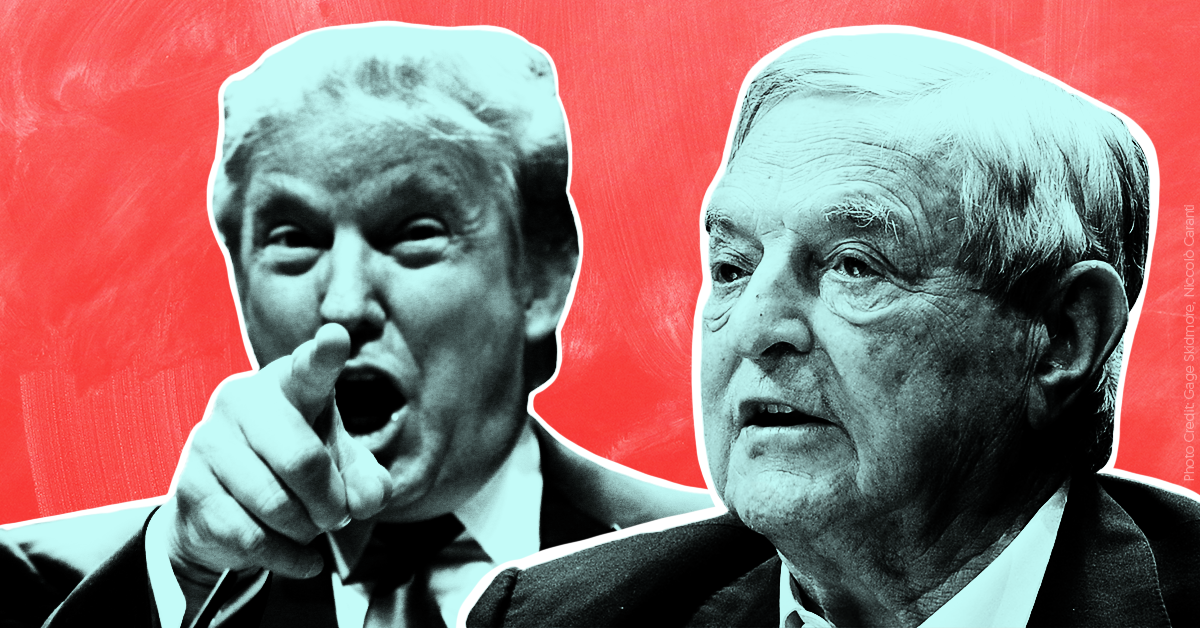 Editor: Why wouldn’t Soros be involved in Russiagate? Eventually all roads lead to George Soros when it is something that fits his agenda. Donald Trump does not fit George Soros‘ agenda, but his removal does, and he will do anything he can to remove President Trump from office.

Elder Patriot – The Democracy Integrity Project (TDIP) was founded by Daniel Jones, a former staffer to Sen. Dianne Feinstein (D-CA), on January 31, 2017. It organized as a Washington-based nonprofit.

Its primary objective is to persuade major media outlets and lawmakers that President Trump should be impeached.

To that end, it pumps out daily “research” briefings to prominent Washington journalists, as well as congressional staffers, to keep the Russia “collusion” narrative alive.

As for Jones’ former boss Sen. Feinstein, she was member of the Gang of Eight in 2016 at the time when the unverified Steele dossier was used by Obama’s CIA Director as the trigger then-FBI Director James Comey relied on to launch Operation Crossfire Hurricane – the counter espionage investigation of Donald Trump.

Later in 2016, the phony dossier became the central piece of evidence that was used to defraud the FISA court in order to obtain surveillance warrants on Donald Trump and members of his campaign.

Jones was a Feinstein staffer during this time.

Shortly after Jones left Feinstein’s staff he established TDIP. What role Feinstein might’ve played in Jones’ decision to found TDIP is not known.

Russian Oligarch Oleg Deripaska penned an op-ed that appeared on the Daily Caller website. In it he wrote about Jones’ ties to Fusion GPS:

… on March 16, 2017, Daniel Jones — himself a team member of Fusion GPS, self-described former FBI agent and, as we now know from the media, an ex-Feinstein staffer — met with my lawyer, Adam Waldman, and described Fusion as a “shadow media organization helping the government,” funded by a “group of Silicon Valley billionaires and George Soros.” My lawyer testified these facts to the Senate Intelligence Committee on Nov. 3.

Recently it was reported by investigative journalist Paul Sperry:

The project’s work has been largely shrouded in mystery. But a months-long examination by RealClearInvestigations, drawn from documents and more than a dozen interviews, found that the organization is running an elaborate media-influence operation that includes driving and shaping daily coverage of the Russia collusion theory, as well as pushing stories about Trump in the national media that attempt to tie the president or his associates to the Kremlin.

By registering as a 501(c)(4) nonprofit, TDIP enjoys tax-exempt status because the group claimed in its mission statement to the IRS to be “non-partisan” and concerned only with protecting the integrity of elections from interference from foreign adversaries like Russia.

By filing under that tax-exempt status, the organization does not have to publicly disclose its donors.

In addition to Soros, who has donated at least $1 million, liberal Hollywood activist Reiner also backs the project, according to the former Simpson colleague with direct knowledge of discussions with Reiner.

Form 990 identifies at least some of those firms financed by TDIP:

In 2017, TDIP doled out $3.8 million to firms tied to Fusion GPS and Christopher Steele. TDIP sent:

$250,000 to Walsingham Partners Ltd., a London-based firm owned by Steele and his partner, Christopher Burrows.

$148,000 to Zuckerman Spaeder, a law firm that has represented Fusion GPS in a variety of dossier-related legal matters.

The payments made by TDIP are more than three times the amount the DNC and the Clinton campaign paid Fusion GPS and Steele during the 2016 presidential campaign to investigate Donald Trump’s possible ties to Russia.

Perkins Coie, the law firm that represented the DNC and Clinton campaign, paid $1 million to Fusion GPS in 2016. Fusion GPS in turn paid Steele, a former MI6 officer, nearly $170,000 for a project that resulted in the infamous Steele dossier.

TheDCNF has since found that a California-based nonprofit called the Fund for a Better Future (FBF) contributed nearly $2.1 million to TDIP in 2017. It is not clear who provided the donation to FBF as the group does not disclose its donors.

Hiding behind the pretext that it is “concerned only with protecting the integrity of elections from interference from foreign adversaries like Russia” sounds like an end run around campaign finance rules.

That especially true now that Robert Mueller, with significantly more resources and, investigative and prosecutorial powers, found no evidence of collusion.

There’s no reason for America’s taxpayers to fund any portion of TDIP’s work.