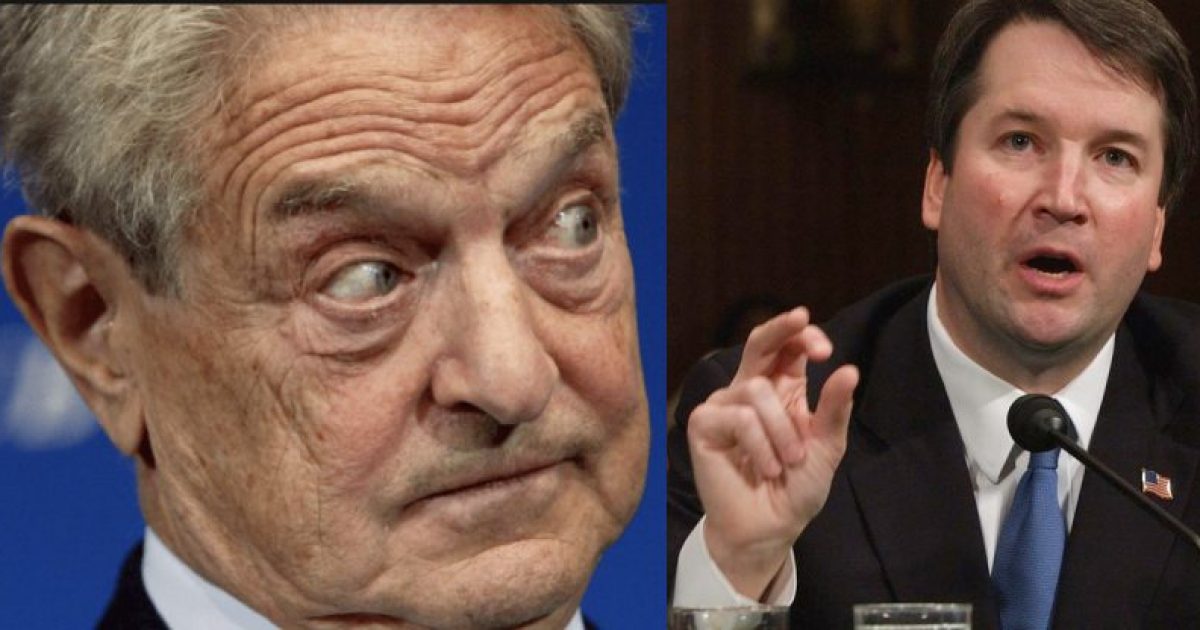 Well, here we go. The opposition to President Donald Trump is going to spend millions of dollars fighting against a Supreme Court justice nominee that adheres to precedence and case law rather than constitutional law. Stop and think about that for just a moment, and if you don’t know the difference and why case law is supposed to exist, I recommend you go back in history, like hundreds of years to understand because case law is what many promote not constitutional law. It’s now being reported that an organization funded by George Soros will spend millions of those Soros dollars to fight against Brett Kavanaugh.

The group, Demand Justice (DJ), is organized and financed by a 501(c)(4) called the Sixteen Thirty Fund, which collected some $2.2 million in contributions from the Open Society Policy Center (OSPC), one of Soros’ primary donation vehicles, between 2012 and 2016.

The Fund is largely financed by a handful of donors. Financial statements filed with state oversight officials in 2014 show just three contributors accounted for 70 percent — or some $11.5 million — of the Fund’s total donations and grant revenue. Disclosure forms filed with the same agency in 2016 present similar facts. Fewer than five donors gave $13.3 million to the Fund, representing 63 percent of their donations.

OSPC is practically indistinct from the Open Society Foundations (OSF), Soros’ philanthropic and grant-giving network. OSPC has no employees of its own, according to the Center’s 2016 tax forms. Rather, Foundations employees are compensated for any work done for the Center. Said compensation is determined by the OSF, and documented in OSF’s internal records.

Soros, who has openly admitted that he profited from the German Nazis and has absolutely no regret from doing so is an enemy to America, Europe and the rest of the world. These front groups for Soros money are engaged in the same tactics as George Soros’ ideology. Thus, this is why they get their money.

Demand Justice came on the scene earlier this year.

Now a new group is emerging on the left in an aggressive effort to counter that imbalance. Demand Justice, a nonprofit being formed by veterans of Capitol Hill, the White House and the Clinton and Obama campaigns, hopes to become a permanent fixture motivating progressive voters on issues related to the federal judiciary while influencing the Senate on judicial nominees.

The organization, which expects to raise $10 million in its first year, is not planning to devote its energy to changing the views of Republicans. It instead wants to instill the same kind of zeal in progressives when it comes to the courts, to make the argument that in the current political environment, it is the federal courts that are the final authority on issues important to progressives such as immigration, abortion, gay rights, social policy, the environment and corporate power, to name a few.

The group will be led by Brian Fallon, the former spokesman for Hillary Clinton who had previously worked at the Justice Department and on Capitol Hill for Senator Chuck Schumer of New York, the Democratic leader. He said he is giving up a role as a television analyst to concentrate on the new push.

According to Fallon, the goal of Demand Justice “will be to try to do opinion research and experiment digitally to figure out how we can sustain a conversation and change minds and sensitize rank-and-file progressives to think of the courts as a venue for their activism and a way to advance the progressive agenda.”

In other words, they want to engage in propaganda.

Here’s the thing, Kavanaugh has his own skeletons in regards to helping to cover up the suspicious death of Vince Foster, which was clearly not a suicide. On top of that, he was hired by radical lesbian Supreme Court Justice Elena Kagan, who is credited with queerifying Harvard. While he says a “judge must interpret law, not make law,” which is absolutely right, he then is a judge that seems to always want to go to precedence when it comes to ruling, and not the Constitution. There is a difference, as I pointed out when the Supreme Court ruled in favor of Hobby Lobby. They didn’t seek out whether the government was acting constitutionally, they merely cited a 1993 law to determine constitutionality. That’s a huge problem!

Kavanaugh has problems from both sides of the aisle, but the Republicans will fall in line because their team’s jersey is being worn in the White House, of course. And this makes me wonder if we are not seeing the biggest political WWE in our history to drive conservatives, constitutionalists and Christians towards Kavanaugh… simply because our opposition is opposed to him. I for one, am not for a Supreme Court justice who is not skilled in constitutional law, no matter who is putting him up. Doing so is just asking for another Anthony Kennedy or John Roberts.

I tend to believe as Joel Skousen wrote that Kavanaugh is a “controlled judge,” and though I get absolutely no money from George Soros, and would turn it down if it was offered, I cannot support such a man to the bench for life who will not follow the guidelines he will take an oath to uphold.