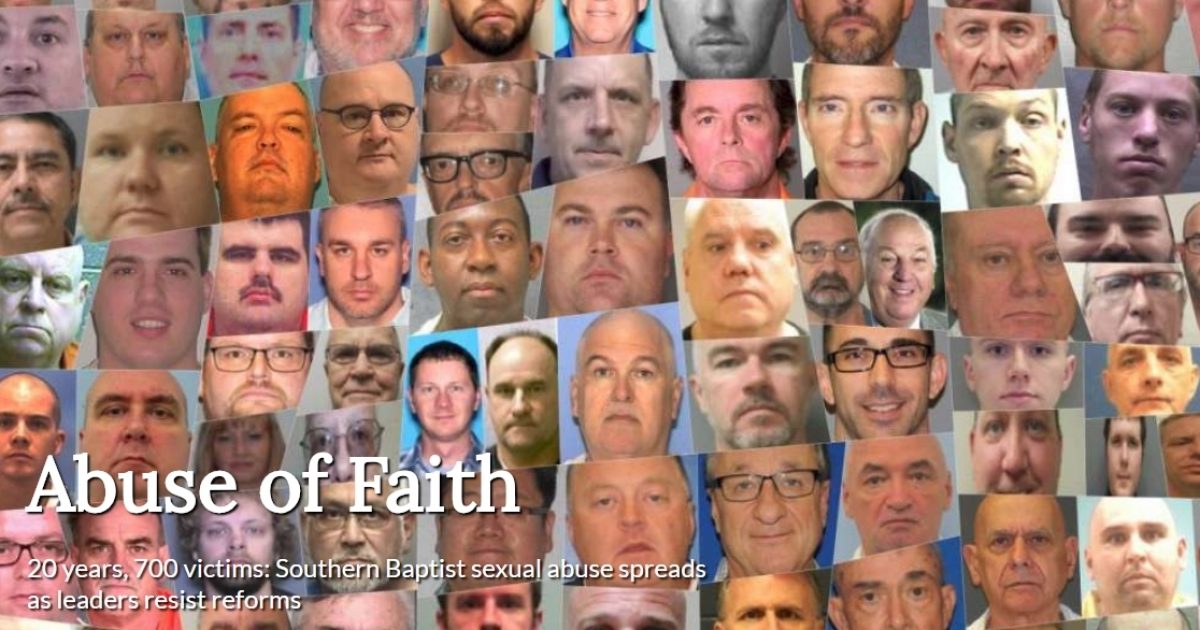 On a biblical level, the Bible calls the Church to deal with sin in its midst privately and call for repentance (cf. Matthew 18). However, when the Church fails to do its duty, then instead of bringing about repentance, it allows sin to flourish and it seems the Southern Baptist Convention is coming under attack for decades of sexual abuse and over 700 victims that, for the most part, no one really did anything about.

The Houston Chronicle lays out a pretty damning story about the SBC that has largely come to pass because the convention does not hold its member churches to account for either doctrine nor the practice of discipline.

In all, since 1998, roughly 380 Southern Baptist church leaders and volunteers have faced allegations of sexual misconduct, the newspapers found. That includes those who were convicted, credibly accused and successfully sued, and those who confessed or resigned. More of them worked in Texas than in any other state.

They left behind more than 700 victims, many of them shunned by their churches, left to themselves to rebuild their lives. Some were urged to forgive their abusers or to get abortions.

About 220 offenders have been convicted or took plea deals, and dozens of cases are pending. They were pastors. Ministers. Youth pastors. Sunday school teachers. Deacons. Church volunteers.

Nearly 100 are still held in prisons stretching from Sacramento County, Calif., to Hillsborough County, Fla., state and federal records show. Scores of others cut deals and served no time. More than 100 are registered sex offenders. Some still work in Southern Baptist churches today.

Journalists in the two newsrooms spent more than six months reviewing thousands of pages of court, prison and police records and conducting hundreds of interviews. They built a database of former leaders in Southern Baptist churches who have been convicted of sex crimes.

The investigation reveals that:

• At least 35 church pastors, employees and volunteers who exhibited predatory behavior were still able to find jobs at churches during the past two decades. In some cases, church leaders apparently failed to alert law enforcement about complaints or to warn other congregations about allegations of misconduct.

• Several past presidents and prominent leaders of the Southern Baptist Convention are among those criticized by victims for concealing or mishandling abuse complaints within their own churches or seminaries.

• Some registered sex offenders returned to the pulpit. Others remain there, including a Houston preacher who sexually assaulted a teenager and now is the principal officer of a Houston nonprofit that works with student organizations, federal records show. Its name: Touching the Future Today Inc.

• Many of the victims were adolescents who were molested, sent explicit photos or texts, exposed to pornography, photographed nude, or repeatedly raped by youth pastors. Some victims as young as 3 were molested or raped inside pastors’ studies and Sunday school classrooms. A few were adults — women and men who sought pastoral guidance and instead say they were seduced or sexually assaulted.

Several accounts of victims are presented in the piece. However, it’s ironic that a former attorney for the Roman Catholic Church, Thomas Doyle, would be referenced as warning the SBC to act on the claims of abuse.

A priest and former high-ranking lawyer for the Catholic Church, Doyle in the 1980s was one of the earliest to blow the whistle on child sexual abuse in the church. But Catholic leaders “lied about it … covered it up and ignored the victims,” said Doyle, now retired and living in northern Virginia.

Doyle turned to activism because of his experiences, work that brought him closer to those abused in Southern Baptist churches. Their stories — and how the SBC handled them — felt hauntingly familiar, he said.

“I saw the same type of behavior going on with the Southern Baptists,” he said.

The responses were predictable, Doyle said. In one, Frank Page, then the SBC president, wrote that they were “taking this issue seriously” but that local church autonomy presented “serious limitations.” In March, Page resigned as president and CEO of the SBC’s Executive Committee for “a morally inappropriate relationship in the recent past,” according to the executive committee.

Details have not been disclosed, but SBC officials said they had “no reason to suspect any legal impropriety.” Page declined to be interviewed.

And there is the problem. While local Churches are governed locally, they must be accountable, which is where a Presbyterian form of government, which is what our Republic is based on, is far more biblical than that of the SBC.

In another report, on Monday, president of the Southern Baptist Convention Ed Young called for a “season of lament, sorrow, and repentance” over a sexual abuse crisis.

However, while young cited at least 10 churches , including Second Baptist Church in Houston, to be scrutinized for their handling of sexual buses and removal from the SBC, there really is no mechanism that the SBC has in place to remove them.

The ten churches he mentioned are:

“Brothers and sisters, there is a problem,” current president J.D. Greear said at a speech to other SBC leaders in Nashville. “This is not a fabricated story made up by people with a secular agenda. We’ve not taken reports of abuse in our churches as seriously as our gospel demands, and sometimes even worse, outright ignored or silenced victims.”

“It’s time we back up our words with actions,” he added.

According to Second Baptist, it “takes allegations of sexual misconduct or abuse very seriously and constantly strives to provide and maintain a safe, Christian environment for all employees, church members and guests… our policy and practice have been and will continue to be that any complaint of sexual misconduct will be heard, investigated and handled in a lawful and appropriate way.”

It is sad that even in the Church we deal with sin, but the Bible has given us instructions on how to deal with it, if only we will.

The Roman Catholic Church has been involved for decades and centuries in the coverup of sexual sins, including among their popes. Sadly, many denominations in the Protestant community are unwilling to follow the prescriptions found in the Bible that would deal with these issues.

What will comes of this? Who knows, but if the Church fails to do its duty, rest assured, someone else will.