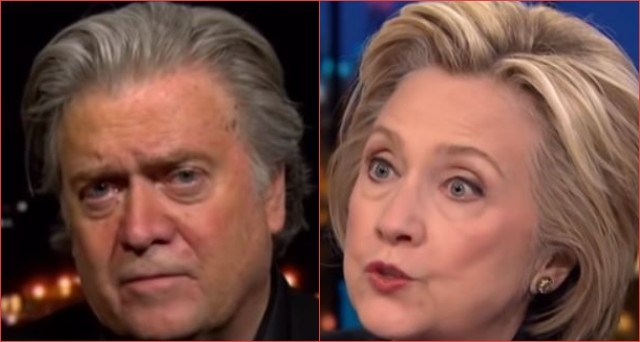 (NationalSentinel) He may not actually be in the White House any longer, but former presidential adviser Steven Bannon isn’t done providing President Donald Trump and his team with counsel.

But perhaps his most intriguing predictions, if you will, pertain to Hillary, whom he says is “definitely running” for the 2020 Democratic nomination, and the fate of her garbage party in next year’s elections.

Though Hillary hasn’t declared yet, he believes the Democrats are preparing to toss Joe Biden overboard as more information comes out regarding his pay-for-play scandalous behavior both with Ukraine and China, where — in both cases — he used his position of power as Obama’s veep to secure lucrative business deals for son Hunter.

That makes sense — the part about Biden, anyway.

Also, percolating in the background are AG William Barr’s ongoing probes into the origins of Spygate and the Russian collusion hoax, which involves that equally corrupt Barack Obama’s use of foreign intelligence services to try and set Trump up for a coup.

This is where it gets interesting, though.

If Hillary jumps in, then that might be the ultimate in hubris: She is every bit as guilty as Obama, Comey, Clapper, Brennan, and the rest of those scumbags who were all involved in trying to bring Trump down. Barr, John Durham, and even John Huber will have everything on her, too.

And no doubt Trump would love to beat the pantsuit off of her again (sorry — poor visual!).

Bannon has a lot of other interesting things to say, too.

This article originally appeared at NationalSentinel and was republished with permission.